The left despises free speech, except for obscenity 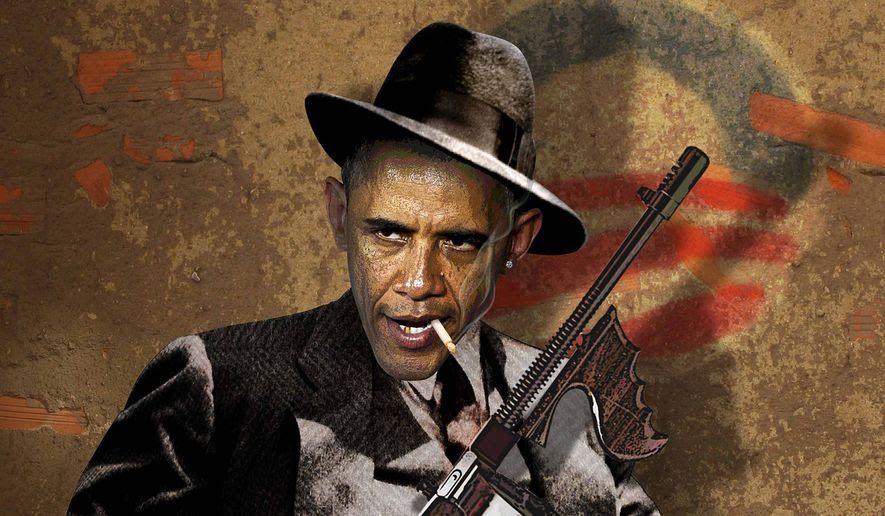 
Ever notice how threats of force invariably follow the left’s pleas for “tolerance?”
Let’s call this criminalization of dissent “totalitolerance.” This term has been around since at least 2013, but it deserves wider circulation, given the ferocity and frequency of progressive attacks on free speech.
In California, Attorney General Kamala Harris demanded the names of donors to conservative nonprofits in order to expose them to the kind of harassment endured by supporters of the Proposition 8 marriage amendment referendum in 2008. Last month, in a case involving the Americans for Prosperity Foundation, she was rebuffed by a federal judge who issued a permanent injunction against this “chilling effect on First Amendment rights.”
Meanwhile, Ms. Harris joined New York Attorney General Eric Schneiderman and 18 other liberal attorneys general in an investigation of ExxonMobil’s charitable contributions to groups that question climate change dogma. After Competitive Enterprise Institute (CEI) writer Hans Bader criticized the inquiry, U.S. Virgin Islands Attorney General Claude Walker sued for access to CEI’s donor lists.
In the same vein, U.S. Attorney General Loretta Lynch has floated the idea to the FBI of criminally investigating climate change “deniers.”
This is gangster government. You think that’s an exaggeration?
In Wisconsin, John Chisholm, the Democratic district attorney of Milwaukee County, ordered a series of “John Doe” raids in October 2013 featuring guns, body armor and battering rams on the homes of private citizens, seeking evidence of collusion between conservative groups and Republican Gov. Scott Walker’s campaign.
The Wisconsin Supreme Court rebuked Mr. Chisholm last July, saying that citizens had a right to be free from “tyrannical retribution of arbitrary or capricious governmental prosecution.”
Last week, President Obama, under whom the Internal Revenue Service has gleefully muzzled conservative groups, threatened to pull federal funding from any school in America that bucks his edict to allow boys in girls’ restrooms and locker rooms. Mr. Obama’s Justice Department is also suing North Carolina over its “bathroom law.”
In Mayor Bill de Blasio’s New York, the city Human Rights Commission is proposing huge fines against people who use pronouns that match people’s actual sex instead of new terms invented by “gender nonconforming people,” such as “ze” or “hir.”
This is the same mayor who is trying to crush Chick-fil-A franchises in his city because the fast-food chain’s owner said he believes in one-man, one-woman marriage. The left despises freedom of speech, with the glaring exception of obscenity.
Fortunately, not every New Yorker shares the mayor’s fanatical devotion to punishing dissenters, as evidenced by long lines outside the two Chick-fil-A stores in the city.
The draconian trans-speak measure in New York could cost “civil penalties up to $125,000 for violations, and up to $250,000 for violations that are the result of willful, wanton, or malicious conduct” if people don’t “speak the way the government tells them to speak,” notes law professor and blogger Eugene Volokh.
This would be funny except it’s deadly serious.
As the totalitolerance express picks up speed in Mr. Obama’s waning incumbency, its effect is being felt from local school districts to the nation’s armed forces.
The Equal Employment Opportunity Commission has ordered the U.S. Army to accommodate a male-to-female transgender soldier by punishing anyone who persists in using male pronouns or bars the soldier from using women’s restrooms.
For good measure, everyone in the Army has been sentenced to eight hours of “sensitivity training” on transgender issues. The order was signed by Bernadette B. Wilson, acting executive officer, Executive Secretariat. Does that sound all-American? Unless we’re talking about a horse, “secretariat” is the language of authoritarianism, not a free republic.
The spirit of the left is replete with intimidation, as disappointed supporters of Democratic presidential candidate Bernie Sanders showed last week in Nevada, where violence erupted and the state party chairwoman was treated to death threats and hundreds of obscene emails. The same threat of violence is hanging over July’s Democratic National Convention.
At Dartmouth College, after the Republican club posted a bulletin board on May 12 celebrating “Blue Lives Matter,” a National Police Week campaign, Black Lives Matter (BLM) protesters tore down the display and posted their own fliers.
Protesters camped in front of the board. Fearing violence, campus security warned the Republicans not to interfere that day, according to the Dartmouth Review. Meanwhile, the BLM protesters posted photos of Republican club members with Donald Trump to identify them for harassment.
A BLM email assailed other students for not joining their cause and studying: “[Expletive] your comfort, there is no such thing as neutral existence. Sitting in the library with your headphones on, intensifies this violence against people of color .”
On May 15, Dartmouth President Phil Hanlon sent an email to undergraduates criticizing the removal of the Blue Lives Matter display and promising to discipline those involved. Let’s hope he follows through.
Thanks to progressive intimidation, totalitolerance has become the norm, not the exception, in the Age of Obama.
Source>http://www.washingtontimes.com/news/2016/may/22/robert-knight-the-left-despises-free-speech/?page=all#pagebreak
Posted by theodore miraldi at 9:45 AM