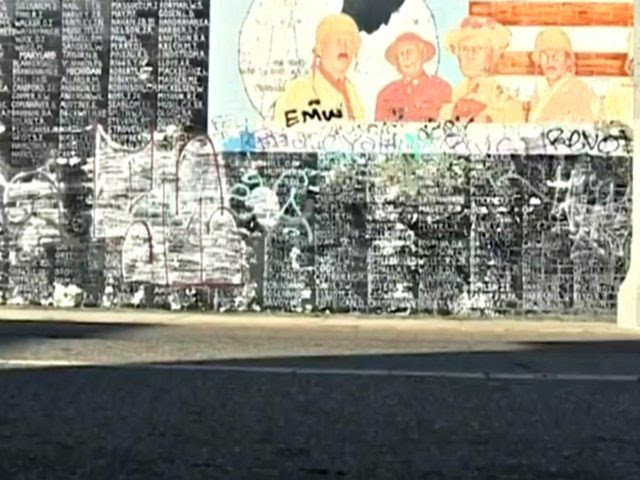 VENICE (CBSLA.com) — Vandals defaced a memorial to Vietnam war veterans in Venice – an awful sight on this Memorial Day weekend.
Stewart Oscars welled up as he looked at the vandalized mural located on Pacific Avenue near Sunset Court. It was covered in graffiti from end to end.
“This knocked me out. So sickening. Just sadness…think of all these people. They’re gone,” Oscars said. “I remember the Vietnam war and how friends went to war, and bodies came back. Somehow, it has to be taught that this is not a good idea. This is actually stupid.”
The memorial was dedicated to service members who were listed as missing in action during the Vietnam War.
George Francisco is the Vice President of the Venice Chamber of Commerce. He also runs a nonprofit called Veterans Foundation Incorporated.
“It’s a desecration. I mean it’s very simple. There’s no sort of other way around it. It isn’t graffiti,” Francisco said.
In March, Francisco helped to bring a replica of the Vietnam Veterans Memorial to Venice Beach. His father was a combat veteran in that war and also helped organize the effort to put up the mural in the late 1980’s.
“I’ve known the sacrifices these people made in an incredibly unpopular war. So to continue the mistreatment of Vietnam veterans is somewhat shocking, somewhat shocking and quite sad,” Francisco added.
People on this street said the memorial was tagged a few days ago. They said the graffiti matches some of the other ones in the neighborhood.
The Los Angeles Police Department said it is not investigating the case.
Source>http://losangeles.cbslocal.com/2016/05/27/vandals-deface-vietnam-war-memorial-in-venice/
Posted by theodore miraldi at 3:21 PM