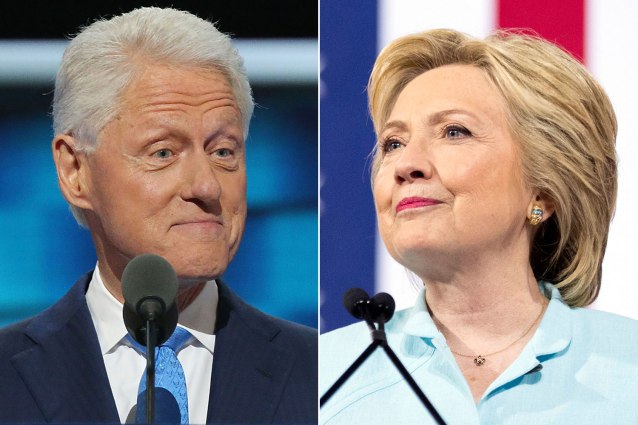 Michael Gooodwin
Here’s a fact to chew on: Much of Day Two at the convention was spent trying to humanize Hillary Clinton. After 25 years in public life, she feels the need to tell us she cares.
A parade of speakers warmed up the crowd by telling stories about her compassion, some of it very long ago. Getting money for New Yorkers after 9/11, helping children get health insurance, securing health care for veterans.
This being a coronation, the circumstances grew in grandeur with each telling, until they made her sound like Mother Teresa. She’s so profoundly kind and tireless and honest and so full of grace, “she defies gravity.”
But wait, there’s more — she’s tough, too. Single-handedly, she practically made peace in the Mideast, forged progress on climate change, and forced Iran to the negotiating table.
If that superhuman doesn’t sound like the Hillary you know, or the world as you know it, well, Bill Clinton showed up to to swear it was all true, and then some.
The former president and first-spouse wannabe started his long yarn back in the beginning, when he and Hillary first met at Yale Law School. He was smitten, with her mind and conviction and courage, of course.
They married and she continued her saintly work in Arkansas, always lifting up the downtrodden and breaking barriers. “I married my best friend,” he said.
The details were charming in a routine way, but the whole exercise had a bizarre quality. Hours after she became the first woman to be the presidential nominee of a major party, America had to be reminded that she was both ordinary and extraordinary at the same time.
The only possible reason is that the Clintons’ jubilation is mixed with fear. The polls are telling a terrifying story — Donald Trump really could win.
One of the reasons is the rising tide of Americans who don’t trust Hillary, a full 68 percent in a recent survey. It is a trend that is potentially fatal to her quest. Hence the desperate bid to humanize her, to make her more trustworthy by telling people why they should admire her.
It might work, but only if Bill Clinton is a miracle worker. Hillary earned her reputation for distrust over those 25 years, and there’s no easy way, or maybe no way at all, to make it go away.
The problem is compounded by the long, drawn-out Bernie Sanders fight for the nomination. In addition to the TV audience, the Sanders delegates in the convention hall are the target of this Hillary-as-hero tale.
But they are a tough sell, too, because the Democratic Party is not the same party it was a generation ago, and it’s definitely not Bill Clinton’s party anymore.
There is a decided anti-police tone — a chant of “Black lives matter” broke out an hour before Clinton spoke — even as cops are being targeted for assassination across the nation. An obsession with racial and sexual identity, redistribution, anti-business and a muddled foreign policy are other striking planks of the new Democratic Party.
It’s the entitlement party Barack Obama created, with more than a little help from Sanders.
The liberal media would have Americans believe that the political gridlock stems from the Republican Party moving right. While it is true that the GOP has a conservative core, that is only half of the story. The other half is the Dems’ dramatic move left.
My favorite illustration involves Sen. Joe Lieberman. The former Connecticut Democrat was regarded as the “conscience of the Senate” and Al Gore made him his running mate in 2000.
Six years later, as a penalty for supporting the Iraq war, Lieberman was drummed out of the party and survived only by winning re-election running as an independent.
That journey from national ticket to pariah in six short years underscores how far and fast the Dems went left after Bill Clinton left office. And it’s still moving, as illustrated by the thunderous ovations Sanders gets every time his name is mentioned.
In hindsight, it’s clear that Clinton’s presidency temporarily interrupted the party’s long-term leftward march, and now it is headed back with gusto to the wilderness of policies that weaken the country at home and broad.
Yet the Clintons are in no position to complain. The party isn’t theirs, but he finally gets to speak for his wife at her convention.
To get here, she had to repudiate many of the policies they both championed in the White House. She had to swallow insults about his philandering, and her trust deficit still could undo her bid.
But for one night, she was a saint. Her husband said so.
Source>http://nypost.com/2016/07/27/bills-desperate-bid-to-humanize-hillary-shows-fear-she-might-lose/
Posted by theodore miraldi at 7:18 AM