COP KILLINGS have never been this lethal, could mean chaos 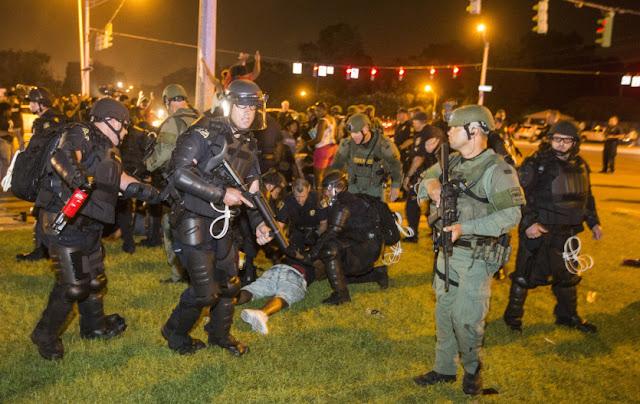 
Over the last two weeks, the “war on police” has gone from a metaphor to a reality, with eight officers killed in targeted attacks in Dallas and Baton Rouge. The country hasn’t seen anything like it since the early 1970s when a lunatic fringe of the left undertook a violent campaign against law enforcement.
Today’s spate of anti-police violence isn’t remotely as organizationally or ideologically coherent, but it is more lethal. The Black Liberation Army, a homicidal splinter group of the Black Panthers, never killed more than two cops in one operation and its body count over the course of about two years was only slightly higher than what we’ve seen just this month.
Vanity Fair writer Bryan Burrough recounts the history in his exceptional book, “Days of Rage.” He dismisses as a myth the popular idea that the left’s violent underground was motivated primarily by opposition to the Vietnam War. “Every single underground group of the 1970s,” Burrough writes (excepting the Puerto Rican FALN), “was concerned first and foremost with the struggle of blacks against police brutality, racism and government repression.”
Black militancy had the most allure, or as a radical lawyer told Burrough, “Everything started with the Black Panthers. The whole thrill of being with them.”
Stokely Carmichael of the Student Nonviolent Coordinating Committee gave black militancy a jump-start with his famous speech in Mississippi in 1966 declaring, “The only way we gonna stop them white men from whuppin’ us is to take over. We been saying freedom for six years and we ain’t got nothin’. What we gonna start sayin’ now is Black Power!”
Carmichael’s activities in Mississippi spawned various Black Panther groups, the most important in Oakland led by Huey Newton and Bobby Seale. They became a sensation with their gun-toting antics and bristling confrontations with police, although they would be outflanked by their “information minister,” Eldridge Cleaver, a convicted rapist, who called for “A black liberation army! An army of angry n - - - as!”
Killing cops quickly moved from a rhetorical pose — the Black Panther newspaper gave us the phrase “Off the Pig” — to an actual imperative. The Weather Underground targeted police in a series of — thankfully — relatively ineffectual bombings.
It was the Black Liberation Army, an underground force spawned in the poisonous split between Newton and Cleaver, that took up the mission with a deadly seriousness.
From 1971 to 1973, the BLA attacked police in San Francisco, North Carolina, Atlanta and New York. In the space of a couple of days in May 1971, it shot four cops in New York, killing two. It carried out a particularly gruesome murder in the East Village in January 1972, ambushing two officers from behind and shooting them to bits when they fell to the ground.
All told, the group killed as many about 10 police officers before it was hunted down and broken up.
Obviously, nothing like the BLA exists today. There isn’t an anti-police underground with safe houses, mandatory readings in Mao and a funding apparatus built on armed robbery.
The cop killers in Dallas and Baton Rouge were, to borrow a phrase from international terrorism, “lone wolves.” But the logic of the Baton Rouge shooter as he explained it on YouTube — the police are a predatory, occupying force that must be resisted violently — is exactly the same as the BLA’s.
The United States has experienced an extraordinary period of social peace dating from the Rodney King riot in 1992 — more than 50 dead and $1 billion in damages — to today. The recent unrest in Ferguson and Baltimore can’t be compared to that five-day conflagration, or the urban riots of the 1960s.
But order is always a fragile thing, dependent on the sense of the legitimacy of our institutions.
With the police under a withering moral and intellectual assault, politicized assassinations of cops, which a few weeks ago would have seemed a relic of the 1970s, are back.
Source>http://nypost.com/2016/07/18/cop-killings-have-never-been-this-lethal-and-it-could-mean-chaos/
Posted by theodore miraldi at 9:07 AM