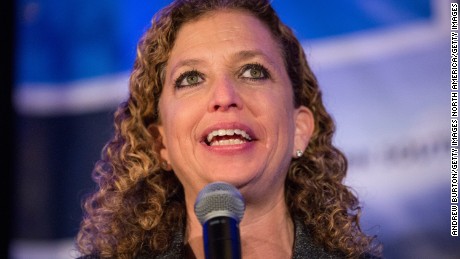 (CNN)The head of the Democratic National Committee will not speak at the party's convention next week, a decision reached by party officials Saturday after emails surfaced that raised questions about the committee's impartiality during the Democratic primary.
Debbie Wasserman Schultz, whose stewardship of the DNC has been under fire through most of the presidential primary process, will not have a major speaking role in an effort "to keep the peace" in the party, a Democrat familiar with the decision said. The revelation comes following the release of nearly 20,000 emails
One email appears to show DNC staffers asking how they can reference Bernie Sanders' faith to weaken him in the eyes of Southern voters. Another seems to depict an attorney advising the committee on how to defend Hillary Clinton against an accusation by the Sanders campaign of not living up to a joint fundraising agreement.
Wasserman Schultz is expected to gavel the convention in and out, but not speak in the wake of the controversy surrounding the leaked emails, a top Democrat said.
"She's been quarantined," another top Democrat said, following a meeting Saturday night.
This is seen as a concession to Sanders, who has been furious at Wasserman Schultz for what he believed was favoritism to Clinton.
The Democrat familiar with the decision said it was done in hopes of preventing chaos on the convention floor among Sanders supporters.
The decision was blessed by Clinton and Sanders officials, this Democrat said.

The leaks, from January 2015 to May 2016, feature Democratic staffers debating everything from how to deal with challenging media requests to coordinating the committee's message with other powerful interests in Washington.
The emails were leaked from the accounts of seven DNC officials, Wikileaks said. CNN has not independently established the emails' authenticity.
One email features DNC staffers appearing to ponder ways to undercut Sanders, an insurgent Democrat who had a bitter relationship with party leadership. Sanders supporters charged that the DNC was biased toward Clinton, and Sanders late in the primary endorsed Wassserman Schultz's primary opponent in her Florida congressional race.
On May 5, a DNC employee asked colleagues to "get someone to ask his belief" in God and suggested that it could make a difference in Kentucky and West Virginia. Sanders' name is not mentioned in the note.
"This could make several points difference with my peeps. My Southern Baptist peeps would draw a big difference between a Jew and an atheist," DNC chief financial officer Brad Marshall wrote.
Marshall did not respond to a request for comment. But Baltimore mayor and DNC Secretary Stephanie Rawlings-Blake denied any suggestion that Clinton's camp was treated more favorably by the committee.
"My expectation is beyond your opinion about a candidate, that you act evenly. All of the officers took a pledge of neutrality and I honored that, and I take that very seriously," Rawlings-Blake told CNN's Poppy Harlow. She added, "I know that the chair will hold those employees accountable if they're found to have acted outside of that neutrality and even-handedness."
Republican nominee Donald Trump, however, said the emails were proof of the Democrats' "rigged" system, resurfacing an attack he's leveled against the party before.
"Leaked e-mails of DNC show plans to destroy Bernie Sanders. Mock his heritage and much more. On-line from Wikileakes, really vicious. RIGGED," Trump tweeted Saturday morning.

In another email, an attorney appears to advise the DNC on how to respond to a dispute between the two campaigns over how much money Clinton's operation had raised for state parties. Sanders' campaign charged that Clinton's team was not handing over its fair share of its fundraising, which Sanders' campaign manager Jeff Weaver said was "laundering" and "looting."
"My suggestion is that the DNC put out a statement saying that the accusations the Sanders campaign are not true. The fact that CNN notes that you aren't getting between the two campaigns is the problem," Marc E. Elias wrote. "Here, Sanders is attacking the DNC and its current practice, its past practice with the POTUS and with Sec Kerry. Just as the RNC pushes back directly on Trump over 'rigged system,' the DNC should push back DIRECTLY at Sanders and say that what he is saying is false and harmful (to) the Democratic party."
Elias and the Clinton campaign did not immediately respond to a request for comment Saturday.
Another exchange involves a discussion on whether to move Maryland ophthalmologist Sreedhar Potarazu from sitting beside President Barack Obama at a DNC event after National Finance Director Jordan Kaplan said he gave less money than Philip Munger, another donor.
"It would be nice to take care of him from the DNC side," Kaplan wrote, referring to Munger.
Potarazu told CNN Saturday that he wants answers from top DNC officials on how they are responding to these revelations, which have surfaced days before the Democratic convention.
"I was obviously shocked to see my name in the middle of all of this because I'm just an innocent bystander," he said.
"I'm curious to see what's happening at the highest levels of the DNC right now," he added. "I don't know, but I'm sure it's a fire drill. The timing is not good."
Wasserman Shultz also called Weaver a "damn liar" in May after he criticized the Nevada Democratic Party following protests among Sanders supporters who said Clinton's backers had subverted party rules. They shouted down pro-Clinton speakers and sent threatening messages to state party Chairwoman Roberta Lange after posting her phone number and address on social media.
"The state party there has a lot of problems. They've run things very poorly. It has been done very undemocratically," Weaver said on CNN in May. "And there seems to be an unwillingness on the part of the Nevada Democratic Party to bring in all of the new people that Bernie Sanders has brought into the process."
The DNC chair responded in an email: "Damn liar. Particularly scummy that he barely acknowledges the violent and threatening behavior that occurred."
And in an email quoting Weaver as saying, "I think we should go to the convention," Wasserman Shultz wrote: "He is an ASS."
Asked about the exchanges, Rawlings-Blake said, "Expressing an opinion about a candidate doesn't mean that you're in collusion, doesn't mean that you are actively working against them. And I don't think that that's what it shows."

The publication of the emails comes just a weekend before the start of the Democratic convention, where a major objective will be to unify the Democratic Party by winning over Sanders' voters.
Several Democratic sources told CNN that the leaked emails are a big source of contention and may incite tensions between the Clinton and Sanders camps heading into the Democratic convention's Rules Committee meeting this weekend. Representatives of the former primary rivals were expected to meet Friday night to discuss the issue.
"It could threaten their agreement," one Democrat said, referring to the deal reached between Clinton and Sanders about the convention, delegates and the DNC. The party had agreed to include more progressive principles in its official platform, and as part of the agreement, Sanders dropped his fight to contest Wasserman Schultz as the head of the DNC.
"It's gas meets flame," the Democrat said.
Michael Briggs, a Sanders spokesman, had no comment Friday.
DNC hack: What you need to know
The issue surfaced on Saturday at Clinton's first campaign event with Tim Kaine as her running mate, when a protester was escorted out of Florida International University in Miami. The protester shouted "DNC leaks" soon after Clinton thanked Wasserman Schultz for her leadership at the DNC.
The DNC has previously had its files hacked by an individual named "Guccifer 2.0" that may have had ties to the Russians.
Hackers stole opposition research on Donald Trump from the DNC's servers in mid-June. Two separate Russian intelligence-linked cyberattack groups were both in the DNC's networks.
CNN's Chris Frates, Elizabeth Landers, Brianna Keilar, Dan Merica, Ziris Savage and Betsy Klein contributed to this report.
Source>http://www.cnn.com/2016/07/22/politics/dnc-wikileaks-emails/index.html
Posted by theodore miraldi at 10:07 AM