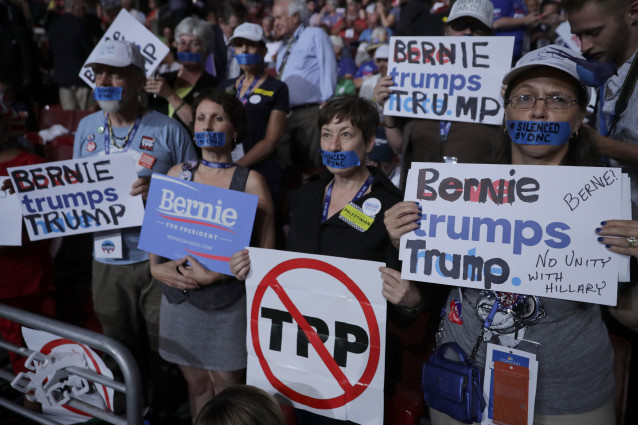 Delegates and attendees hold signs in support of Sen. Bernie Sanders on the first day of the Democratic National Convention.


You won’t need an astrologer to see the future if Hillary Clinton becomes president. You can just take the anger, backstabbing and blame-gaming at the Democratic Convention and repeat — for four years.
Another email scandal, another FBI investigation, all laced with wild conspiracy theories about Russian hackers helping Donald Trump and with a victim card always at the ready. Hillary played one early, telling “60 Minutes” that she’s widely distrusted only because lots and lots of bad people say untrue things about her.
Where to begin with that one?
Ah, it’s the Clintons, and only the details are new, everything else is the same old, same old. She still sees a vast right wing conspiracy, and now there’s also a conspiracy on the left that’s out to get her, too.
It could be that the black cloud of trouble follows the Clintons, or that they are the cloud. Either way, it’s already clear in Philadelphia that they haven’t lost their gift for turning the routine into the riotous.
The bid by the disgraced Debbie Wasserman-Schultz to hang on to her chairman’s job long enough to gavel in the delegates seemed foolhardy, and was. She had trouble getting a word in at her home state delegation’s breakfast, so it was an act of mercy that she soon disappeared into the void of former chairman.
But any hope that her resignation would mollify Bernie Sanders delegates was also quickly dashed. His accusations that the national committee had rigged the game to favor Clinton had been proven true, which naturally inflamed his already-hot backers.
The irony is as thick as the Philly humidity. Sanders and Clinton both campaigned against a rigged economic system, yet all the while she was benefitting from a rigged party system. Hey, it’s the Clintons.
Now that hackers revealed the scam and heads are rolling, many questions remain, but one especially stands out: Who orchestrated it?
We know from the email trail that lots of insiders were involved, and Wasserman-Schultz took the fall. But did she order it? Or was she ordered to do it?
The one thing impossible to believe is that Clinton’s campaign has clean hands. The bid to sabotage Sanders would have benefitted her and her alone, so she certainly had a motive.
At the time, he was giving her about as much trouble as she could handle. His every success made her look weak and forced her to spend money in surprising places, especially New York, which should have been a cakewalk.
Moreover, Sanders’ victories kept forcing her to move left with all her major policies to try to bring his socialist-leaning crowd into her tent. The sooner she could dispatch him, the sooner she could start moving back toward the center for the general election.

Yet here she is, finally at her very own convention, a full eight years behind schedule, and the Sanders headache that wouldn’t go away is suddenly a full-blown migraine. Well into a long night of speakers, his supporters still had an energy edge in the convention hall, and Sanders himself gained the loudest and longest ovation when he took the stage.
To top it off, there’s that fresh FBI investigation, which has to be the last thing in the world Clinton wants to face. If nothing else, it’s a reminder of the last one, which focused on her private server and handling of national secrets and almost cost her the whole game. It still might, with a majority of voters saying she should have been indicted, making them a hard sell in the fall.
Yet the G-men are back again, wanting to look at a new batch of emails. At least that’s where they’re starting, but who knows where they’ll end up.
Remember, it’s the Clintons.
http://nypost.com/2016/07/25/dnc-disarray-is-the-foreshadowing-of-a-clinton-administration/
Posted by theodore miraldi at 7:20 AM