Donald Trump Jr. delivers the speech his dad never could 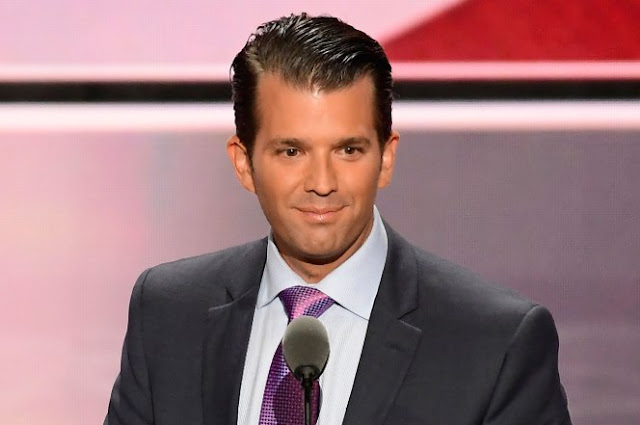 John Podhoretz
It’s no secret I’m not a Donald Trump fan. Except it turns out after Tuesday night I am. Only it’s Donald Trump . . . Jr.
The nominee’s son delivered the speech of the Republican National Convention so far — indeed, maybe its only fully successful and totally realized speech. Donald Jr. saved a lackluster night, characterized by a profound lack of energy in the early hours and a weirdly inappropriate and tastelessly vengeful prosecutorial brief against Hillary Clinton by Chris Christie.
Then Donald Jr. took the stage, and suddenly the cloud of gloom that had settled on the Quicken Loans Arena since the session was gaveled to order at 5 pm was lifted.
Poised and focused, with a compressed energy that did not require him to yell (as so many others have been doing), Donald Jr. established the connections between the themes of the Trump campaign that the candidate himself has found it extremely difficult to do.
And, unlike his father, he proved himself both understanding and supportive of explicitly conservative policy ideas.
The key message of the speech was that Trump is a candidate of (remember these words?) hope and change in a country desperately in need of a renewed sense of confidence and purpose. The argument he made was ingenious: His father is no ordinary rich capitalist, but one who reaches “for the impossible” and can therefore help America do the same when it is at low ebb:
“For the first time, parents no longer think that their kids will be as well off as they were. We’ve lost our confidence, the bounce in our step, the faith in our institutions. But remember one thing. We’re still Americans. Still one country. And we’re going to get it all back.”

In his reckoning, Donald Sr. will provide the means for that. That’s because his father is a practical, unpretentious man who’s spent his life working in the building trades and therefore sees through social and class distinctions that have blinded increasingly isolated American elites to the problems of ordinary people:
“Let me tell you how he ran his businesses. He didn’t hide out behind a desk in some executive suite. He spent his career with regular Americans. He hung out with the guys on construction sites pouring concrete, laying sheetrock. He listened to them and valued their opinions as much, and often more, than the guys from Harvard and Wharton who were locked away in offices away from the real work.”

“It was, in almost every respect, a speech Donald Trump Sr. could not give — and one that Marco Rubio could have.”

In fact, Donald Jr. said, his father has “promoted people based on their character, their street smarts and their work ethic, not their paper credentials. To this day many of the top executives in his company are individuals that started out in positions that were blue collar. . .
“He sees the potential in people that they don’t even see in themselves, the potential that other executives would overlook because their resumes don’t include the names of fancy colleges and degrees.”
Donald Sr., his son said, has lived the American dream, has provided others with a pathway to the American dream, and can do the same for the country — in contrast to the Democrats:
“The other party also tells us they believe in the American Dream. They say we should worry about economic inequality and immobility. You know what? They’re right. But they don’t tell you that it was their policies that caused the problem, and that their policies have no accountability.”
He then linked this weakness to the failures of our public schools and overregulation of the economy, and offered a pathway to change. “We will not accept the current state of our country because it’s too hard to change. That’s not the America I know.
“We’re going to unleash the creative spirit and energy of all Americans. . . . We’re going to put Americans first. All Americans. Not a special class of crony elites at the top of the heap.”
It was, in almost every respect, a speech Donald Trump Sr. could not give — and one that Marco Rubio could have.
A kerfuffle broke out an hour later because the speechwriter had used a couple of lines he had published previously in an article under his own name. That was not Trump’s doing, and the speech clearly reflects his own views.
I do not believe his portrait of his father is an accurate reflection of who Donald Trump is or what his interest is in politics or the presidency, but if Trump is going to win the presidency, he needs a positive spin on his negative approach. He got that, finally, from his son last night.
And his son made himself a political comer.
Source>http://nypost.com/2016/07/20/donald-trump-jr-delivers-the-speech-his-dad-never-could/
Posted by theodore miraldi at 7:24 AM