Hillary to be UPSTAGED by Rivals at DNC 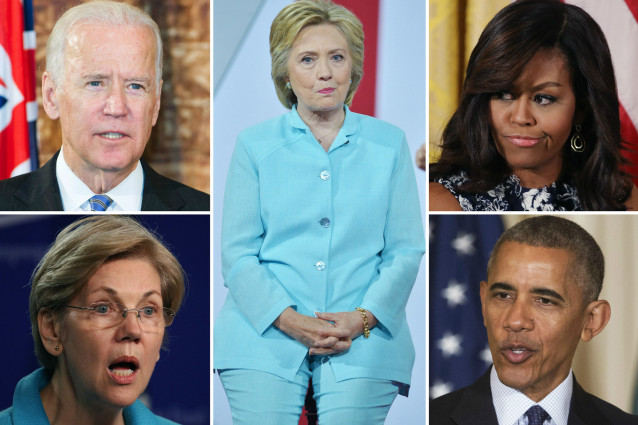 Michael Goodwin
Now that Donald Trump has nailed his manifesto to the door and defined the election in stark and certain terms, Hillary Clinton gets her chance. But unless she suddenly finds a backbone, look for her to deliver a muddled list of Democratic nostrums that satisfies no one.
To compensate for her wishy-washy, flippy-floppy untruthiness, Clinton has loaded her lineup of convention speakers with political sluggers. As such, she seems determined to test the proposition that you can never have too much of a good thing.
But you can, if it means the star of the show gets lost in the crowd and her message looks like a puréed compromise of others’ convictions.
That’s the risk Clinton takes by featuring President Obama and Michelle Obama, Bill Clinton and Joe Biden, Bernie Sanders and Elizabeth Warren. Her husband’s star power is diminishing and the others resemble a reunion of rivals rather than a supporting cast.
It’s weird enough to make you feel sorry for poor Hillary. Well, almost.
She earned her predicament. Having failed to establish a rationale for her campaign beyond a sense of entitlement and inevitability, she is acting like a European-style parliamentary candidate hoping to be selected prime minister by her party instead of an American presidential candidate appealing directly to voters.
Her approach represents a big change from her campaign in 2008, when she exhibited more moxie and certainty. A lurid joke in her race against a young Obama was that she should give him one of her balls so they’d both have two.
Whether it’s circumstance, health issues, or a combination of factors, she’s now running as a shrunken version of that person, quickly trimming her sails to meet the demands of others.
In truth, there was always a taint to her image as a trailblazer because she owes her political career to her husband and especially to his infidelity. After she saved his butt during the Monica Lewinsky impeachment battle, it was no secret he would repay her by helping her win the Senate seat in New York.
Selling pardons to Puerto Rican terrorists and Hasidic thieves in exchange for votes were just some of the unseemly things they did together.

Hillary must finally articulate a rationale for why she should be president and demonstrate that she is leading the party, and not the other way around.

Then, after losing to Obama in 2008, she further compromised her independence by hitching her wagon to his White House. Whatever the truth of their awkward personal relationship, she is now dependent on the president’s support.
She deserved to be indicted in the e-mail scandal, and almost certainly would have been without Obama’s protection. That burdened her with yet another IOU that limits her ability to maneuver around his failed policies.
Suppose, for example, more terror attacks at home force her to take a more muscular approach to the Islamic State. How does she do that without breaking from his refusal even to call the enemy by its name? And what does she say about his limited airstrike campaign, which, as Obama’s CIA head admitted, hasn’t reduced the barbarians’ ability to carry out slaughters in Europe and America?
Obama’s power over her is the black vote. If he signals a lack of enthusiasm for her, turnout among his most loyal supporters could sag and cost her the election. Obviously, Obama doesn’t want to help Trump, but his vanity is easily pricked.
Complicating things even more for Clinton, Bernie Sanders and Elizabeth Warren are also squeezing her. She won the nomination with the backing of the establishment and the connivance of the Democratic National Committee, but Sanders won the hearts of the new generation.
To woo his backers and his endorsement, Clinton repudiated many of her long-held positions. Her stands on trade, criminal justice, Wall Street, health care, college tuitions — all were thrown overboard in a craven bid to save herself.
Some of that is politics as usual, and effective leadership often requires compromise. But Clinton’s reputation for dishonesty is both personal and political, and the nomination crown she has won is battered with dings and dents.
A test will come in her acceptance speech Thursday night. She must finally articulate a rationale for why she should be president and demonstrate that she is leading the party, and not the other way around.
If she succeeds, she’ll be the clear front-runner for November. If she can’t, she will have sold her soul and have nothing to show for it.
Source>http://nypost.com/2016/07/23/hillary-runs-dangerous-risk-of-being-upstaged-at-convention/
Posted by theodore miraldi at 10:29 AM