Hillary Clinton on Friday announced Virginia Sen. Timothy Kaine as her running mate, going with an experienced politician seen as a strong centrist who could attract independents and possibly disenchanted Republicans – and most certainly the safe pick.
“I'm thrilled to announce my running mate, @TimKaine, a man who's devoted his life to fighting for others,” Clinton tweeted ahead of the Democratic National Convention set to kick off Monday in Philadelphia.
View image on Twitter 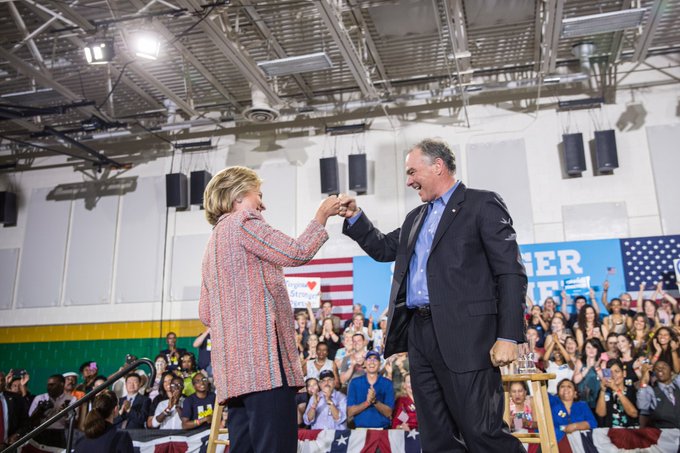 Hillary Clinton  ✔@HillaryClinton
I'm thrilled to announce my running mate, @TimKaine, a man who's devoted his life to fighting for others. -H

For his part, Kaine tweeted that he was "honored" to be her running mate.

Senator Tim Kaine  ✔@timkaine
Just got off the phone with Hillary. I’m honored to be her running mate. Can’t wait to hit the trail tomorrow in Miami!

The pair was expected to make their first campaign appearance Saturday at a rally in Miami at Florida International University.


In the final deliberations, Clinton was said to be weighing Kaine, Agriculture Secretary Tom Vilsack and New Jersey Sen. Cory Booker, having whittled down her short-list over the past several weeks.
In Kaine, who also is a former Virginia governor and former chairman of the Democratic National Committee, her campaign is going not with a bulldog or political firestarter but a measured, moderate nice guy with swing-state appeal, including in his home battleground state of Virginia.
One of the first to react to the announcement was House Democratic leader Nancy Pelosi who called Kaine "an exceptional choice."
On the Republican side, RNC Chairman Reince Priebus said, "Hillary Clinton has chosen someone who holds positions she's spent the entire primary trying to get to the left of."
The pick comes as the Clinton campaign tries to paint newly anointed Republican nominee Donald Trump as divisive and dangerous, a theme they hit hard coming out of the Republican National Convention in Cleveland. Trump closed his convention Thursday night with a wide-ranging 75-minute acceptance speech heavy on law-and-order themes and promises to put “America first.”
“He offered a lot of fear and anger and resentment, but no solutions about anything that he even talked about,” Clinton countered during a speech to supporters Friday in Tampa, Fla., before the VP announcement.
Kaine isn’t as liberal as some other VP prospects, notably class warrior Sen. Elizabeth Warren, D-Mass. – and is unlikely to whip up the base like Clinton’s dogged primary rival Bernie Sanders. But Kaine is an ally, having endorsed Clinton early on in the campaign. He also speaks fluent Spanish, which could be useful in increasing the campaign’s reach among Hispanic voters.
Clinton’s announcement and move to seize the spotlight from Cleveland follows four days of steady attacks by Republicans against the presumptive Democratic nominee – over her email scandal, her reputation for poll-tested politics and her record in public office.
In his nomination acceptance speech, Trump blasted Clinton’s foreign policy record as secretary of state – citing the bloody tumult in Iraq, Syria, Egypt and Libya – saying her legacy is “death, destruction, terrorism and weakness” and a “change in leadership” is needed.
“Hillary Clinton’s legacy does not have to be America’s legacy,” he said.
Clinton, over the course of the Democratic veepstakes, also met with several other prospects, including Warren, Colorado Gov. John Hickenlooper, Labor Secretary Tom Perez and Housing Secretary Julian Castro.
Problems surfaced in recent days for a couple of them, notably Castro who was cited by a government watchdog for allegedly violating federal law by touting Clinton’s candidacy in his official capacity during a media interview.
Kaine's selection by Clinton leaves his Senate seat open.
Source>Shttp://www.foxnews.com/politics/2016/07/22/clinton-names-virginia-sen-kaine-as-running-mate.html
Posted by theodore miraldi at 9:40 PM