Hillary’s LYING is the behavior of a SOCIOPATH 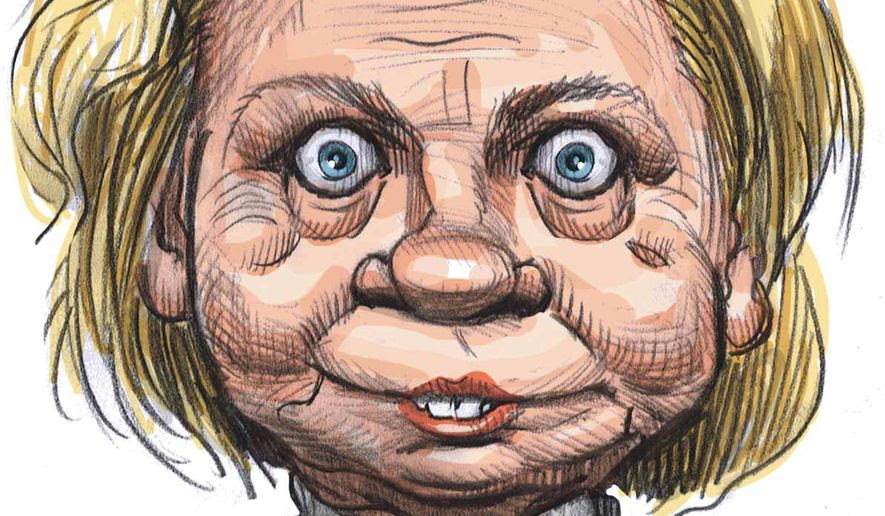 ANALYSIS/OPINION:
When Great Britain’s Boris Johnson was forced out of the running to replace David Cameron as prime minister by an act of the utmost treachery, the civilized minority on both sides of the Atlantic knew that we had only one candidate left to deliver us amusement and a dramatic shift to good government, Donald Trump. He is entertaining, good natured, and possessed of sound ideas to break the logjam in Washington. The Brits are just going to have to be patient.
After all, Boris is not completely out of government. Mr. Cameron’s successor, Theresa May, has just made him foreign minister, a position from which he can continue to shake up Europe, the English-speaking world, and even his country’s staid Foreign Office. He is energetic and has a delightful way with words, for instance, when he chided President Obama for “the part-Kenyan president’s ancestral dislike of the British Empire.” Mr. Obama had ordered that a bust of Winston Churchill be removed from the White House, even though the British statesman was part-American. That was rich. Or when he disesteemed Hillary Clinton for having “dyed blonde hair and pouty lips, and a steely blue stare, like a sadistic nurse in a mental hospital.”
Another good line Boris, but was his assessment fair? I think not. To begin with, she does not have “a steely blue stare.” The blue of her eyes is, as with practically everything else about her, a studied fake. She wears blue contact lenses. Her blue eyes look a muddy brown without her cosmetic lenses. As for her “dyed blonde hair,” for all I know she is bald. When Boris speaks of her putting him in mind of a “sadistic nurse in a mental institution,” he is only half right.
If she were in a mental institution she would be in one not because she was a “sadistic nurse,” but because she was a patient. She is an obvious sociopath. I have watched her carefully for 25 years and reviewed her life going back over four decades. She does not know right from wrong.
Her recent run-in with the FBI and her obvious lies to the American people and to the relatives of Benghazi’s victims have been preceded by lies during her work for the Watergate committee, during her years in the Arkansas governor’s mansion (cattle futures, Whitewater, scores more scandals), during her White House years, during Sept. 11 (Chelsea’s epic run) and then her email catastrophe. These are only lies she has told. They have nothing to do with her corruption. Forget not that we have yet to hear about the investigation of her co-mingling of State Department and Clinton Family Foundation work.
In 2009 she was given a fresh start at State. All her past indiscretions had been wiped away by the elite’s collective amnesia. Yet somehow she managed with her thousands of State Department emails to pull off her greatest blunder ever. With Hillary things do not get better. They get worse.
Any person undergoing an FBI investigation who tells so many lies so effortlessly has no sense of right or wrong. When she said, “I did not email any classified material on my email,” she meant it. Though it was a lie. When she said, “There was nothing marked classified on my emails, either sent or received,” she meant it. Though it was a lie. When she said, “I provided the Department with all of my work-related emails, all that I had,” she was in earnest. But it was not the truth. At her first press conference addressing her errant emails she lied when she said, “I thought it would be easier to carry just one device for my work and for my personal emails instead of two.” Balderdash! As anyone who looked into the matter soon discovered, she had multiple devises for four years as she reigned atop the State Department.
Most of us who care to know realize that she has lied throughout this enormous scandal, the worst that has ever engulfed any secretary of state and arguably any president, including her impeached husband. Now we have the director of the FBI to certify these lies and several others. Yet the Democrats in convention assembled are going to nominate her for the highest office in the land.
They claim Donald Trump lacks the “temperament” of a president. Yet they would nominate a candidate who lacks basic probity? Every time her character is put to the test, Hillary fails the test. This time she failed it on the world stage: at home, in hell holes such as Libya and Syria, and in compromising our intelligence to “hostile actors.” The Democrats would settle for a crook as their nominee over a candidate of questionable temperament. The last time they questioned the temperament of a Republican his name was Reagan. The American people gave him a landslide.
Source>http://www.washingtontimes.com/news/2016/jul/19/hillary-clintons-lying-is-the-behavior-of-a-sociop/
Posted by theodore miraldi at 7:56 AM