Hillary’s WAR on Medicare is big trouble for SENIORS 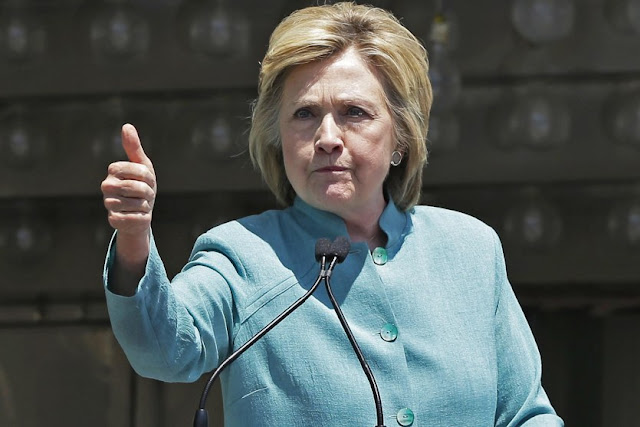 
Hillary is taking a sledgehammer to Medicare. In a move calculated to fire up the extreme left wing of the Democratic Party, presidential candidate Hillary Clinton pledges to open Medicare to people 55 to 64, and to make a “public option” insurance plan for all ages.
The 65-and-overs are already having a hard time finding a doctor willing to accept Medicare’s stingy payments. Hillary’s proposals will suddenly invite in millions more patients competing for the same doctors. Seniors, brace yourselves for long waits to see a doctor.
Medicare is stretched so thin to meet the needs of today’s seniors that expanding enrollment is like inviting the neighborhood for dinner when you don’t have enough food to feed your own kids.
Over a fifth of doctors currently are turning away new Medicare patients, according to a Kaiser Family Foundation survey. Hillary’s scheme would add a massive segment of the population to Medicare’s ranks. It’s likely 10 million new people would sign up — a sudden 20 percent increase in patients knocking on doctors’ doors for appointments.
A public option would compound the problem. A public option is a government-run insurance plan. It would be offered alongside established commercial plans like Cigna, WellCare and Humana but it would pay doctors and hospitals at Medicare-like rates.
President Obama claims it will “deliver care more cost effectively.”
Like so many of the president’s health-care claims, this one’s untrue. Doctors and hospitals clobbered with these new low rates will have to get creative to make ends meet. They’ll shift costs to privately insured patients and also further limit how many Medicare patients they treat.
Hospital organizations are warning that “adding millions more enrollees whose health care would be reimbursed at Medicare rates” will “threaten access.” That’s the immediate danger for seniors. They may still have a Medicare card, but hospitals and doctors will be devising ways to avoid treating them.
Sadly, the Democratic Party and its nominee have decided that promising more health-care goodies pays off politically, never mind the peril to Medicare.
Medicare is projected to run out of money for hospital bills in 2028. Then the nation will be faced with a grim choice: Either drastically slash what it pays hospitals — risking that some hospitals will stop accepting Medicare — or impose draconian tax hikes.
Despite this looming crisis, the Obama crowd has used Medicare as its piggy bank. In 2010, Obama took $716 billion destined for Medicare and shifted it to fund new subsidies for purchasers of ObamaCare plans and a vast expansion of Medicaid. Obama has added 20 million people to the Medicaid rolls and hiked benefits so the cost is $8,000 per Medicaid enrollee, far more than the $5,600 average spent on privately insured patients.
Now Hillary proposes adding millions more people to the Medicaid rolls and allocating billions of additional dollars for community health centers that serve primarily illegal immigrants. Ignoring Medicare’s precarious future while piling on new health-care spending for other programs is a sorry reflection of her party’s priorities. And political opportunism at its worst.
Politicians need to shore up Medicare before promising new publicly funded health-care benefits. The nation is $19 trillion in debt, and pressure is building for what Washington insiders call “entitlement reform.” The best way to reform entitlements is to stop creating new ones. Otherwise, every new program will mean less care for seniors.
Donald Trump gets that. He pledges to protect Medicare by repealing Obama’s funding cuts and reversing ObamaCare regulations designed to restrict care for seniors.
Hillary’s campaign tries to pin the “heartless tycoon” label on Trump, claiming that he plans to eviscerate Medicare. To see the real danger to Medicare, all Hillary needs to do is look in the mirror.
Source>http://nypost.com/2016/07/19/hillarys-war-on-medicare-is-big-trouble-for-seniors/
Posted by theodore miraldi at 7:42 AM