How Hillary BLEW her big moment 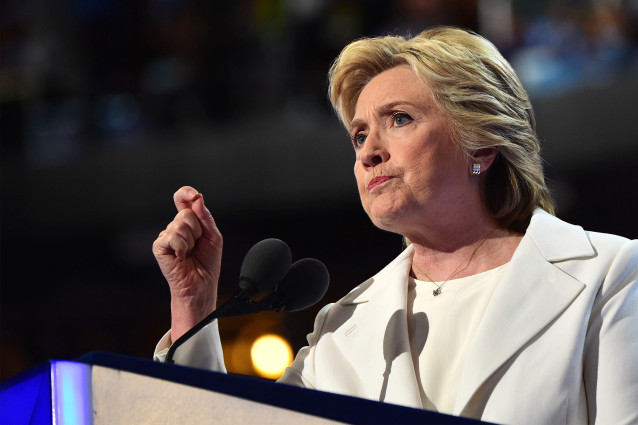 
Well, Hillary Clinton took the stage after four days of Democratic triumph — the party staged what was even to these conservative eyes and ears the best, tightest, most interesting convention of our time — and pretty much stunk up the joint.
Her speech was a Jell-O mold of a sort my Aunt Millie used to make — blandly gelatinous in flavor and texture with little pieces of boilerplate left-liberal policy suspended in it like peach chunks from a three-week-old can. I can’t think of another one of these events when the presidential candidate’s acceptance address ended up solidly in the running for the more-than-dubious honor of being the worst speech of the convention.
I’d quote the bad parts, but since it was almost all bad parts I couldn’t decide which one. I’d even quote the good lines to be fair, only there weren’t any. There were some passable ones, true, but citing them to praise them is like praising a pitcher with an 11.33 ERA for throwing a few strikes here and there over nine full innings.
After losing her lead in the poll averages to Donald Trump and after the FBI director indicted her in spirit if not in fact, Hillary needed to rise to the occasion, simply as a practical political matter.
She needed to win over undecided voters with a new eloquence she had not shown previously, establish the place she would wish her presidency to secure in the flow of American history, do something to convince people she’s trustworthy…and come across as likable.
The previous three days of the convention did a brilliant job setting her up for just that. It cast her and the Democratic Party in fresh new terms as the voices of optimism and patriotism in this election.
And just a few hours before she took the stage came breathtaking remarks by Gen. John Allen and especially Khizr Khan, a Muslim whose son Humayun died defending this nation as a Purple Heart and Bronze Star recipient in Iraq — both of which sounded notes that the Republican convention could not sound because of Donald Trump’s words about Muslims and his incoherence on the subject of fighting ISIS.
Then Hillary blew it.
She spoke in her patented da-DA da-DA ta-TA cadence, which makes every sentence sound like every other. What is more, she looked more angry than determined and seemed in no way transformed into a larger or more impressive figure due to her historic accomplishment at securing her party’s nomination and very possibly the presidency itself.
For all those who want to dismiss my words here as the dishonest rantings of a right-winger who dislikes Hillary, let me assure you that I dislike Barack Obama a lot more, butas I said yesterday in these pages, I thought his speech was magnificent. If Hillary had been good I would say so. But she wasn’t good. She was kind of the opposite of good.
What’s more, I’m pretty sure that if you watched it and you’re honest with yourself, you know it, too.
We’ve seen candidates transcend their past ineloquence in these circumstances before, to great effect.
George H.W. Bush was vice president for eight years and no one’s idea of an exciting candidate for president, but at his convention he knocked it out of the park.
Four years later, Bill Clinton transcended his reputation at the time for being robotic and excruciatingly boring (yes, really, that was his reputation as a speaker) with an address that drew a perfect contrast between him as the man of the future and Bush as the man of the past.
And in 2000, George W. Bush — at the time considered a parlously awful speaker — seemed to become a different, more serious, more focused, more capable candidate after he worked hard on a very successful convention address.
Not Hillary. Which is why her supporters and fans should be disappointed in her rather than mad at me.
Source>http://nypost.com/2016/07/29/how-hillary-blew-her-big-moment/
Posted by theodore miraldi at 9:19 AM