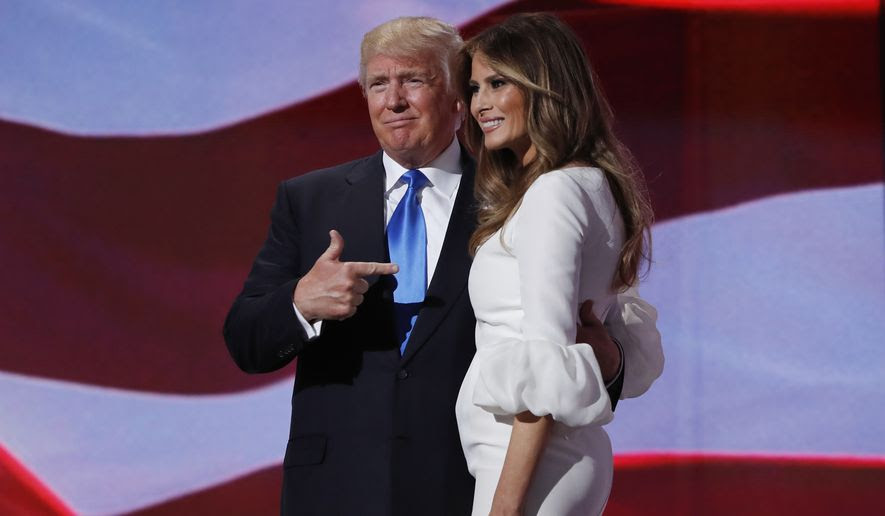 ANALYSIS/OPINION:
CLEVELAND — To hell with The Donald. Let’s hear it for The Melania!
You can’t say the guy doesn’t like immigrants.
He just likes them tough, strong, confident, glamorous, gorgeous — and legal.
Becoming an American citizen, Melania Trump told Republican delegates on the first night of the convention, was “the greatest privilege on planet earth!”
Boy, what a refreshing and starkly different attitude to have in the White House.
Remember during the 2008 primary when First Lady Michelle Obama declared after her husband began winning primary contests that it was “the first time in my adult life I am really proud of my country?”
And she is the appealing one currently living in the White House.
Hearing Mrs. Trump describe her husband and his determination, you couldn’t help but contrast it with the failed experiment that is eight years of Barack Obama.
Just before her speech, former New York Mayor Rudy Giuliani reminded everyone of Mr. Obama’s hugely vaunted 2004 convention speech when he decried the notion of a “white” America or a “black” America — only a United States of America.
Consider all the ways he has made things so much worse 12 years later with riots, protests, dead cops and Black Lives Matter pleadings.
Mr. Trump broke with convention norms by showing up to introduce his Slovenian-born wife, who speaks five languages and succeeded brilliantly in one of the world’s most viciously competitive businesses.
His unmistakable shadow appeared behind the billowing fog machine, above glowing footlights to the strains of every hockey fan’s favorite victory song, Queen’s “We Are the Champions.”
“No time for losers.” Indeed.
The cameras panned and picked up slightly bewildered look on Vice Presidential nominee Mike Pence’s face.
“No room for small thinking,” Mrs. Trump said. “No room for small results.”
Source>http://www.washingtontimes.com/news/2016/jul/18/melania-trump-tough-strong-confident-glamorous-gor/
Posted by theodore miraldi at 7:54 AM