More Pandering to our Corrupt southern neighbors. Obama more worried about street creds with Blacks and Hispanics than doing what is right for our nation. Always playing smallball.
...tmiraldi 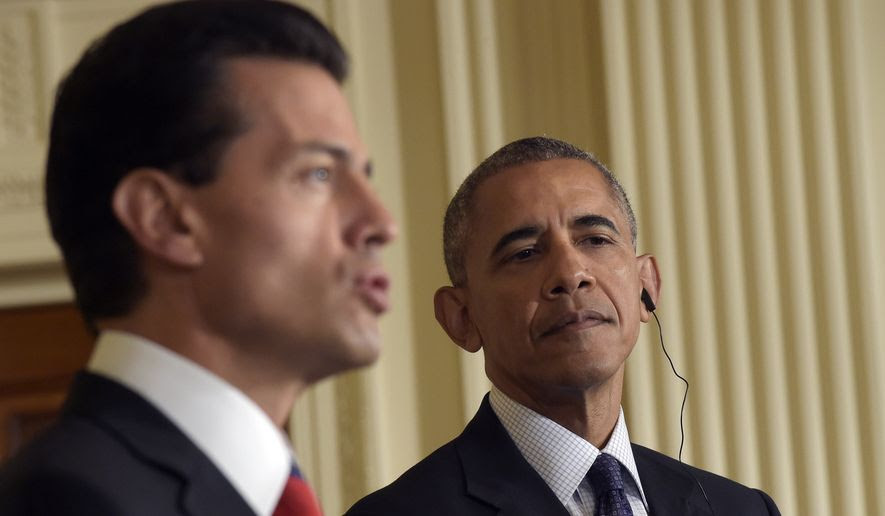 President Obama hit back Friday at criticism from the Republican National Convention of his leadership, saying crime and illegal immigration in the U.S. are at their lowest levels in decades.
“Some of the fears that were expressed throughout the week just don’t jibe with the facts,” Mr. Obama said at a White House press conference with Mexican President Enrique Pena Nieto. “The violent crime rate in America has been lower during my presidency than any time during the last three of four decades.”
Responding the day after Republican nominee Donald Trump gave an acceptance speech harshly critical of Mr. Obama’s leadership, the president said he hopes Americans woke up Friday morning to realize that there were “birds chirping … and folks are going to work.”
SEE ALSO: Obama says Mexico is crucial to ‘well-being’ of U.S.
“This idea that America is somehow on the verge of collapse, this vision of violence and chaos everywhere, doesn’t really jibe with the experience of most people,” Mr. Obama said.
During his speech Thursday night, Mr. Trump said “decades of progress made in bringing down crime are now being reversed by this administration’s rollback of criminal enforcement.”
While the murder rates have spiked in several major U.S. cities this year, the overall crime rate during Mr. Obama’s presidency was down 13 percent by the end of 2015. With tensions rising over use of force by police in minority communities, there have also been assassinations of several police officers in recent weeks, including five in Dallas and three in Baton Rouge, Louisiana.
Mr. Obama said Americans are “heartbroken” about the police slayings but added, “The rate of intentional killings of police officers is also significantly lower than it was when Ronald Reagan was president. Those are facts. That’s the data.”
In 1987, there were at least 96 police officers in the U.S. killed in incidents of assault, shootings or other attacks. This year, there have been 42 deaths in similar attacks, according to the Officer Down Memorial Page.
Addressing Mr. Trump’s calls to build a wall on the Mexican border, Mr. Obama said, “The rate of illegal migration into the United States today is lower by two-thirds than it was when Ronald Reagan was president. We have far fewer undocumented workers cross in the border today than we did in the ‘80s or ‘90s or when George [W.] Bush was president. That’s a fact.”
Mr. Obama said he didn’t watch any of the Republicans’ convention.
“I’ve got a lot of stuff to do and — and they are pretty long events,” he said.
Source>http://www.washingtontimes.com/news/2016/jul/22/obama-hits-back-rnc-criticism-crime-illegals-rates/
Posted by theodore miraldi at 8:39 AM