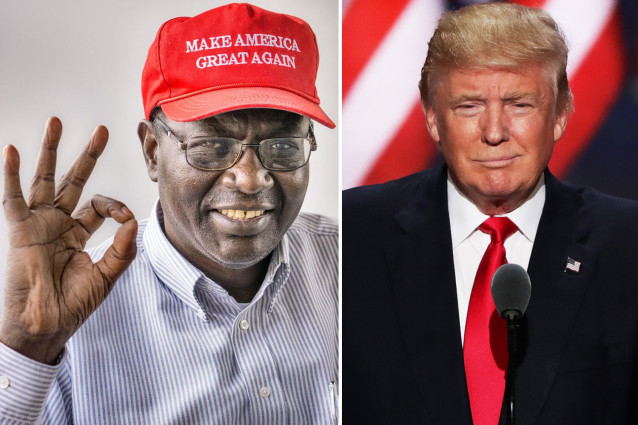 
President Obama’s Kenyan half-brother wants to make America great again — so he’s voting for Donald Trump.
“I like Donald Trump because he speaks from the heart,” Malik Obama told The Post from his home in the rural village of Kogelo. “Make America Great Again is a great slogan. I would like to meet him.”
Obama, 58, a longtime Democrat, said his “deep disappointment” in his brother Barack’s administration has led him to recently switch allegiance to “the party of Lincoln.”
The last straw, he said, came earlier this month when FBI Director James Comey recommended not prosecuting Democratic presidential candidate Hillary Clinton over her use of a private e-mail servers while secretary of state.
“She should have known better as the custodian of classified information,” said Obama.
He’s also annoyed that Clinton and President Obama killed Libyan leader Moammar Khadafy, whom he called one of his best friends.
Malik Obama dedicated his 2012 biography of his late father to Khadafy and others who were “making this world a better place.”
“I still feel that getting rid of Khadafy didn’t make things any better in Libya,” he said. “My brother and the secretary of state disappointed me in that regard.”
But what bothers him even more is the Democratic Party’s support of same-sex marriage.

‘I like Donald Trump because he speaks from the heart. Make America Great Again is a great slogan. I would like to meet him.’
- Malik Obama

“I feel like a Republican now because they don’t stand for same-sex marriage, and that appeals to me,” he said.
Obama believes strongly in the institution of marriage — so strongly that he has at least three current wives, although press reports have put the number as high as 12.
When asked by The Post how many wives and children he has, Obama demurred.
“That’s personal,” he said.
Obama made headlines in 2011 when he married his third wife, who was still in her teens.
Obama plans to trek back to the US to vote for Trump in November. Obama used to live in Maryland, where he worked for many years as an accountant and is registered to vote there, public records show.

The president’s and Malik’s father, Barack Obama Sr., left Kenya in 1959 when Malik was a year old and his mother was pregnant with his sister Auma. Obama Sr. enrolled at the University of Hawaii, where he met and married the president’s mother, Stanley Ann Dunham. Malik Obama didn’t meet his younger half-brother until 1985. President Obama, 54, has seven half-siblings from both sides of his family.
Malik Obama, the eldest, is the director of the Barack H. Obama Foundation, a controversial Virginia charity named for his father. He says he started the charity in 2008 because he wanted to make a difference in the family’s hardscrabble village in Kenya.
But the charity came under fire when The Post revealed in 2011 that it was an off-the-books operation that hadn’t registered with the state of Virginia or, as it claimed, had tax-exempt status from the IRS.
Shortly after The Post report, the IRS gave its stamp of approval, leading to speculation that the president had intervened.
But Malik Obama bristles at the suggestion, saying he dug deep to pay for the electrical transformers and college scholarships that the foundation provided in Kogelo. According to its latest tax filing, the nonprofit has just $24,000 in its coffers.
“My brother didn’t help me at all,” said Obama. “He wanted me to shut it down when I set it up. He hasn’t supported me at all.”

Lately, family ties seem to be frayed. Obama, who was best man at the president’s wedding, said he spoke to his brother a year ago and was miffed that he did nothing to help his own foray into politics when he ran for governor of the southwestern Kenyan county of Siaya in 2013.
Malik Obama lost the race, and spent $20,000 of his own money on the unsuccessful campaign.
“I don’t think politics is my thing,” he told The Post. “Honestly, I’ll be happy when my brother is out of office, and I will finally be out of the limelight and be able to live like a human being.”
Until then, Obama wears his new GOP colors proudly; He even has a “Make America Great Again” hat.
“Mr. Trump is providing something new and something fresh,” he said.
Source>http://nypost.com/2016/07/24/why-obamas-half-brother-says-hell-be-voting-for-donald-trump/
Posted by theodore miraldi at 8:41 AM