Pence seeks to UNIFY after Cruz 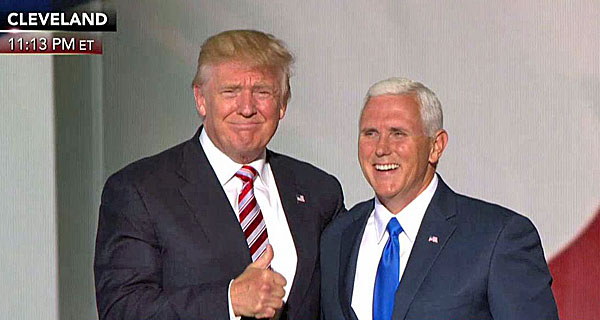 
CLEVELAND — Mike Pence had the stage to himself Wednesday night. But even with Donald Trump off stage and watching, a different, Texas-sized echo was still ringing.
After largely being overshadowed by Trump during his official debut last weekend, the billionaire businessman’s running mate used the prime-time stage on Wednesday night to bridge the divide between the conservatives who have fallen in line behind Trump and those still holding out. He also tested out his new role as Trump's No. 1 attack dog on Hillary Clinton.

But Pence's prime-time moment came as Republicans were still picking their jaws up from the floor after Texas Sen. Ted Cruz jolted Quicken Loans Arena by telling Republicans to "vote their conscience" in November.

As Pence took the stage, Indiana's delegates chanted "Mike! Mike! Mike!" By the end of the speech, more delegates began to chant, "We Like Mike! We Like Mike! We Like Mike!"
"You know, I'm new to this campaign. Honestly, I never thought I would be standing here. I thought I would be spending this evening with all my friends in the great state of Indiana," Pence said. "Yet there I was, a few days ago in New York City with a man who won 37 states, who faced 16 talented opponents and outlasted every one of them, and along the way brought millions of new voters into the Republican Party."

"He is a man known for a large personality, a colorful style and lots of charisma. So I think he was just looking for some balance on the ticket," Pence quipped, to cheers.

Absent from Pence's half-hour call to unify behind Trump, however, was any mention of the proposed wall on the Mexican border, international trade agreements or a temporary ban on Muslims, all issues on which the governor had previously publicly registered his disagreement with Trump before joining the ticket.

House Speaker Paul Ryan (R-Wis.), who said Friday that he could “think of no better choice” than his former House colleague, introduced Pence warmly on Wednesday night, listing his accomplishments in Congress and from Indianapolis.
"He’s a man of conviction. He’s a man you can trust. He comes from the heart of the conservative movement and from the heart of America. And now we need to send him and Donald Trump straight to the White House," Ryan said, as the Indiana delegation waved signs and cheered.

Pence reciprocated by calling Ryan a "true friend and a great American leader."
Trump's campaign heralded the five ways it claimed Pence "is the perfect candidate to fight" Clinton in a release posted to its website Wednesday night. Those particular attributes, gleaned from his time as a congressman and subsequently governor, included Pence's staunch anti-abortion stance, his role as a "touted economic reformer," his "pro common sense" position on education reform, caring about U.S. veterans and, lastly, that "he's an honest, principled leader."

Clinton's campaign met Pence's opprobrium with press releases carrying the subject lines "Pence Has a History of Praising Hillary Clinton " and "America Deserves Better Than Mike Pence," attempting to negatively bundle the the Republican running mates together.
Laying out the stakes against Clinton in his own speech, Pence pointed to the Supreme Court, the Second Amendment and foreign affairs.

"As the proud father of a United States Marine, let me say from my heart, anyone who said that, anyone who did that should be disqualified from ever serving as commander in chief of the armed forces of the United States of America," Pence declared.
As Pence concluded, he proclaimed the election "another time for choosing" with only one choice.

"This team is ready. Our party is ready and when we elect Donald Trump the 45th president of the United States, together we will make America great again," Pence declared.
The GOP establishment has largely welcomed Pence as Trump’s running mate, whom Trump even admitted was a play for party unity.

"It's gotta be reassuring to conservatives," said Curt Smith, a longtime Pence friend and president of the conservative Indiana Family Institute. "It's vintage Mike."
Rex Early, a former Indiana state party chairman who has known Pence for more than 20 years and has missed only one national convention since 1968, said the speech "ranks right with the best of them, with Ronald Reagan."

Pence's speech was "superb," said Jenny Beth Martin, the chairman of the Tea Party Patriots Citizens Fund, in a statement touting in particular his work as governor to pass the state's largest tax cut in history.

"His commitment to protecting the Constitution and determination to do what he thinks is right for the country gives conservatives who have not yet decided to vote for Donald Trump a reason to unite around a more conservative ticket," Martin added.
Pence has been adjusting to his sidekick role, and the awkward dynamic between the two men was fully on display during their sitdown on “60 Minutes” on Sunday, during which Trump often stepped on Pence’s answers.

Still, Pence has been busy making the case for Trump in his first week as the GOP’s vice presidential nominee, calling him a direct political descendant in the line of Ronald Reagan.
"I have a sense of this man. I have a sense of his heart. I have a sense of his hands-on style of leadership, and for all the world, he reminds me of Ronald Reagan,” Pence told the American Conservative Union Foundation’s luncheon in Cleveland. “Ronald Reagan achieved great things in his life and his career, a movie star, a celebrity, governor of the great state of California, but he never lost the common touch, did he?"

On Wednesday, Trump and Pence made their first joint appearance on the campaign trail, delivering a dramatic arrival into Ohio in a Trump-branded Sikorsky helicopter. Once there, Trump acknowledged Pence and his wife, Karen. Speaking before and after Pence, Trump also acknowledged that he did not want to keep Pence by speaking too long, after press accounts of last Saturday’s VP announcement largely focused on the Manhattan mogul’s winding address introducing Pence, who spoke for a fraction of that time.

Pence’s address also represented an opportunity for the Midwestern governor to make his case, not only to delegates packed into Quicken Loans Arena, but also to the millions of Americans watching who largely say they don’t know enough about the first-term governor to form an opinion of him.

"For those of you who don't know me, which is most of you, I grew up on the front row of the American Dream," Pence said, discussing his background growing up in southern Indiana.
A CBS News poll conducted earlier this month showed just 5 percent of registered voters with a favorable opinion of him, with 8 percent not favorable and a whopping 86 percent who responded that they were undecided or had not heard enough. Pence fared little better among Republicans surveyed, 85 percent of which said they were undecided or had insufficient information, or self-identified conservatives, of which 84 percent said the same.
In the days following Pence’s selection, an NBC News/SurveyMonkey poll found more registered voters with an opinion, but a plurality still lacking for information. Slightly more than a quarter, 26 percent each, were split on whether their opinion of Pence is favorable or unfavorable. However, among Republicans and Republican-leaning voters, 49 percent said they have at least a somewhat favorable impression of him.

But in the brewing contest to come between Trump and Clinton, whoever Pence is might not matter. Nearly one-third of registered voters in the CBS News poll taken before the governor joined the ticket said the choice of a vice presidential candidate has no effect on their vote, while 39 percent said it had only some, and 30 percent said it mattered a lot. And in the poll released Wednesday, more than three-quarters of all registered voters said Pence made no difference.