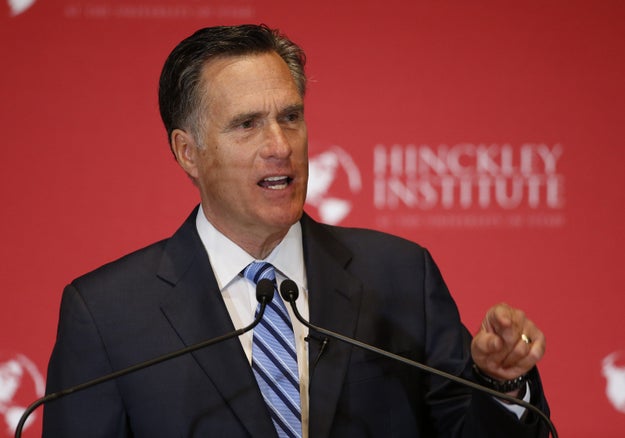 Romney was speaking with Republican consultant Mike Murphy’s Radio Free GOPpodcast released two weeks ago when he made the comments.
“You have to give Donald Trump credit, he was able to bring a rhetoric and a style that he had perfected over his career to the political sphere and connect with people and become the nominee,” Romney said. “Despite the fact that I and a lot of other people thought he would not be an ideal nominee, he is. At this stage, it’s rougher going, but I can’t predict what’s gonna happen.”
“To be honest, it’s very possible in my view that Trump wins,” continued Romney. “I wouldn’t think it’d be by a landslide, but I think he could win. I think he could lose, I think he could lose by a landslide. But, I don’t know which it’s going to be and a lot of that depends on what happens to Hillary Clinton. Is there a meltdown moment, or some implosion of some kind?”
The former governor said he wouldn’t vote for Trump or Clinton and would look at the other candidates running to see who he would vote for. Romney also said he could write in the name of another Republican if unhappy with choices.
Later in the interview, Romney said he never thought Trump would win the primary, but that because of the crowded field of candidates he missed being scrutinized in a way that might have kept him from winning the nomination.
“It was an ideal setting for him, and he was successful going through it, you’ve got to give him credit for that,” said Romney.
Romney stated Clinton was viewed as inauthentic, and she was trying to act like her husband former President Bill Clinton.
“You can’t forget that Hillary Clinton is a player as well, and she’s an awful candidate. People don’t trust her, they don’t like in my view she comes across as not being at all authentic. I don’t understand why it is she can’t be what I had expected her to be, which is Angela Merkel or Kathleen Sebelius,” said Romney. “There are serious women leaders who don’t go into an audience and put their arms up in the air and make a big guffaw kind of smile. It’s almost like she’s acting like she’s Bill Clinton and she’s not Bill Clinton. Nonetheless, it doesn’t come across well.”
“I think she’s a really challenged candidate and the unfavorables numbers that she has suggest that it is not going well for her, so, she could lose this. Right now, Donald Trump has momentum, but he’s facing some tough headwinds, but Hillary Clinton is also facing headwinds.”
Source>https://www.buzzfeed.com/andrewkaczynski/mitt-romney-thinks-donald-trump-could-win-the-election?utm_term=.apwQrb4lD#.mpnQjOgdz
Posted by theodore miraldi at 9:58 AM