Ted Cruz is a man with no honor, his narrow vision of  America allows him to lose the nomination and still have the hubris to promote his lost cause. This is the same Ted Cruz who praised Trump and was thoroughly beaten by the voters. This is the same Ted Cruz who signed the PLEDGE to support the nominee no matter who won. How unfortunate for our nation to be seeded with men like Ted Cruz and John Kasich when so much is at stake. These two men are part of our problems and in it for glory. The people in Ohio and Texas have been shamed by these two traitors who have symbolically voted for Hillary Clinton.
...tmiraldi 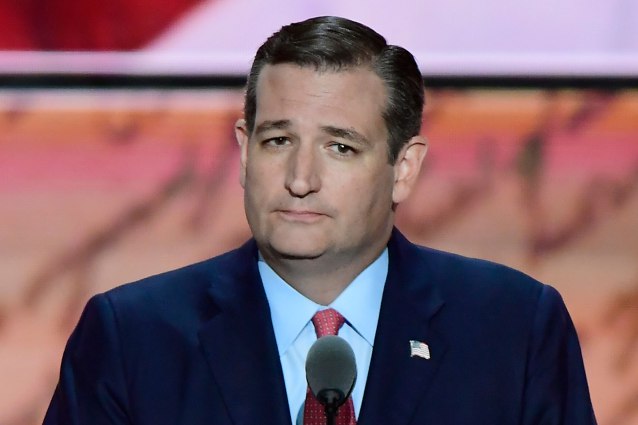 CLEVELAND — Ted Cruz is a provocateur — a divider, not a uniter, someone whose political career is characterized by the challenges he poses to the leaders of his own party.
On Wednesday night, in a jaw-dropping speech that led to the longest and loudest set of boos I’ve ever heard for a speaker at any convention, Cruz sought to do to Donald Trump what he has done to Mitch McConnell — the Republican Senate leader against whom he has set himself from the moment he came to Washington in 2012.
He was setting himself up either as the internal GOP critic for a Trump presidency or the voice of conscience for a GOP trying to repair itself after a Trump defeat.
In this case, he intended to offer his challenge subtly — through a text that did not explicitly endorse Trump and instead called for “leaders who stand for principle. Unite us all behind shared values. Cast aside anger for love. That is the standard we should expect, from everybody.”
Subtle it may have been, but not subtle enough to evade the rage of the Trump campaign. Evidence suggests the Trump camp had decided it was going to punish Cruz for this impertinence.
After Cruz spoke those sentences, the New York delegation began to yell at Cruz from the floor — demanding an explicit endorsement of the candidate. It is highly unlikely such a thing happened without direction from the Trump campaign.
And when Cruz continued by telling the audience to “vote your conscience [and] vote for candidates up and down the ticket who you trust to defend our freedom and to be faithful to the Constitution,” the hall erupted in catcalls — something I don’t ever remember happening at any nominating convention.
I was watching the speech from the stands, and so I did not witness the ultimate effort to step on Cruz — Donald Trump himself entering his box and breaking focus from the podium.
Cruz is a daring politician, and takes risky steps to advance his own interests. His leadership in forcing the government shutdown in 2013 was ill-advised and pointless, but it served to set him up as the outsider-insider, the DC GOP senator who rejected the working order of the Republican Senate.
He saw that the 2016 race was going to go to an insurgent, and he tried to set himself up as that insurgent.
Unfortunately for him, the insurgent of all insurgents came along to Trump his efforts and deny him the nomination.
The question now is whether Cruz helped or harmed himself, and the answer depends entirely on November.
Cruz made it clear he wanted to cast himself as a supporter of Trumpian issues — building a wall, and protectionist trade policies that “put America first.”
That’s what was so daring about Cruz’s speech. He was implicitly declaring Trump the wrong kind of nominee for his party and promising to be the better version of him should Trump lose.
Source>http://nypost.com/2016/07/21/ted-cruz-knows-exactly-what-hes-doing/
Posted by theodore miraldi at 7:46 AM