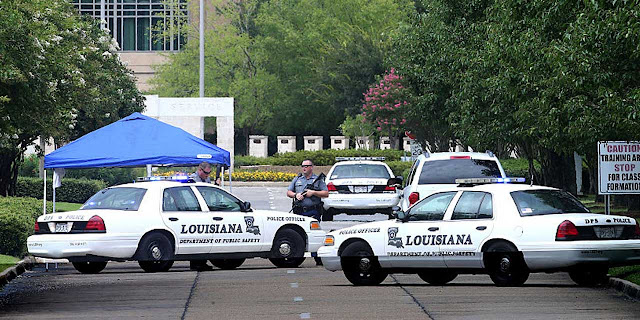 
Perhaps it will turn out that the latest assassination of police officers, this time in Baton Rouge, is unrelated to the hatred fomented by the Black Lives Matter movement. Perhaps the gunmen were members of militia groups aggrieved by federal overreach, say. But the overwhelming odds are that this most recent assault on law and order, taking the lives of three officers and wounding at least three more, is the direct outcome of the political and media frenzy that followed the police shootings of Alton Sterling in Baton Rouge and Philando Castile in Falcon Heights, Minnesota, less than two weeks ago.  That frenzy further amplified the dangerously false narrative that racist police officers are the greatest threat facing young black men today.
President Barack Obama bears direct responsibility for the lethal spread of that narrative. In a speech from Poland just hours before five officers were assassinated in Dallas on July 7, Obama misled the nation about policing and race, charging officers nationwide with preying on blacks because of the color of their skin. Obama rolled out a litany of junk statistics to prove that the criminal justice system is racist. Blacks were arrested at twice the rate of whites, he complained, and get sentences almost 10 percent longer than whites for the same crime. Missing from Obama’s address was any mention of the massive racial differences in criminal offending and criminal records that fully account for arrest rates and sentence lengths. (Blacks, for example, commit homicide at eight times the rate of whites and Hispanics combined, and at about 11 to 12 times the rate of whites alone.) Instead, Obama chalked up the disparities to “biases, some conscious and unconscious that have to be rooted out . . .  across our criminal justice system.”
Then five Dallas officers were gunned down out of race hatred and cop hatred. Did Obama shelve his incendiary rhetoric and express his unqualified support for law enforcement? No, he doubled down, insulting law enforcement yet again even as it was grieving for its fallen comrades. In a memorial service for the Dallas officers, Obama rebuked all of America for its “bigotry,” but paid special attention to alleged police bigotry:

When African-Americans from all walks of life, from different communities across the country, voice a growing despair over what they perceive to be unequal treatment, when study after study shows that whites and people of color experience the criminal justice system differently. So that if you’re black, you’re more likely to be pulled over or searched or arrested; more likely to get longer sentences; more likely to get the death penalty for the same crime. When mothers and fathers raised their kids right, and have the talk about how to respond if stopped by a police officer—yes, sir; no, sir—but still fear that something terrible may happen when their child walks out the door; still fear that kids being stupid and not quite doing things right might end in tragedy.
When all this takes place, more than 50 years after the passage of the Civil Rights Act, we cannot simply turn away and dismiss those in peaceful protest as troublemakers or paranoid.

The irresponsible zealotry of this rebuke was stunning. Obama was fully on notice that the hatred of cops was reaching homicidal levels. And yet his commitment to prosecuting his crusade against phantom police racism trumped considerations of prudence and safety, on the one hand, and decent respect for the fallen, on the other. Of course, Obama also uttered the mandatory praise for officers who “do an incredibly hard and dangerous job fairly and professionally,” and he warned against “paint[ing] all police as biased, or bigoted.” This was self-indulgent hypocrisy. A passing denunciation of stereotyping hardly compensates for the insane accusation that black parents rightly fear that any time “their child walks out the door,” that child could be killed by a cop.
It is possible that the Dallas killers and the Baton Rouge killers had not heard Obama’s most recent speeches on criminal-justice racism, or even the many that preceded them. But even if the cop murderers had not encountered Obama’s exact words, the influence of his rhetoric on the hatred in the streets is absolute. Obama’s imprimatur on the Black Lives Matter demagoguery gives it enormous additional thrust and legitimacy, echoing throughout public discourse into the most isolated corners of the inner city.
The media bear equal responsibility for the ongoing carnage. The press immediately slotted the shootings of Sterling and Castile into the racist-cop paradigm, though the facts about what the officers saw and whether the victims were in fact reaching for their guns were unknown. The New York Times went into cop-calumny overdrive, with an editorial entitled “When Will the Killing Stop?” and a series of back-to-back op-eds decrying the brutal oppression of blacks in America. One of those op-eds, by an assistant professor at Purdue University, bemoaned that blacks were up against a world “where too many people have their fingers on the triggers of guns aimed directly at black people.” The professor was presumably not referring to the thugs who shot a three-year-old boy in Chicago on Father’s Day this year, leaving him paralyzed for life, or who shot a five-year-old girl, a seven-year-old boy, and an 11-year-old boy in Chicago on the Fourth of July. She was probably also not referring to Le’Vonte King Jason, a two-year-old boy killed on July 8 in Minneapolis, a few miles away and two days after Philando Castile was shot by police during a traffic stop. Jason was in a car driven by his father that was peppered with bullets in a drive-by shooting; the gunfire hit his 15-month-old sister as well. Except for a local columnist, the press ignored Jason’s funeral, in contrast to the media scrum that inundated Castile’s funeral on the same day.
Even before this latest attack on the police, officers across the country have been reeling under the prejudice directed against them. A police trainer meeting with officers on July 7, hours before the Dallas carnage, reported to me that the cops were “out of their minds that the default [in the Castile and Sterling shootings] is racism, without one iota of fact.” Officers have already been backing off of proactive policing under the constant charge that they are racist for making pedestrian stops and enforcing public-order laws in black neighborhoods. In June, I spoke with police officers in Dallas about the 75 percent increase in homicides the city has experienced this year. The officers chalked it up to de-policing. “Officers are now leery of doing their job,” a cop who runs warrants in the high-crime Five Points area told me. “Why make stops in the first place?” This summer of blue bloodshed will deter officers from discretionary policing even more. Expect violent crime, already on the rise since the shooting of Michael Brown in Ferguson, Missouri, in summer 2014, to spike further.
Between the Dallas assassinations and today’s, officers have been shot at and ambushed in Tennessee, Missouri, Georgia, and Washington, D.C. Authorities have been circumspect in identifying the reasons behind those shootings—unlike the alacrity with which racial motives are assigned to cops when they shoot someone in the line of duty— and the incidents have been brushed under the rug. But we are quickly reaching the worst days of the nightmare 1960s, when it seemed that the very foundation of society was breaking apart. The difference between the 1960s and today is that the hatred of law enforcement and of whites is being stoked by the highest reaches of the establishment. Universities sometimes seem like little else than factories of desperately ginned-up racial grievance.  That the cop killer in Dallas and apparently in Baton Rouge as well came out of the military is an indication that the happy talk about how the military is an engine of racial reconciliation is naïve. The country has been pretending that the main source of racism today comes from whites. Anyone who has spent time in the inner city and even more middle-class black precincts—such as college campuses—knows differently.
It may be too late to stop this fire from spreading. But Obama has one more chance to try to put it out. He failed that opportunity in his remarks hours after the Baton Rouge carnage, delivering instead an anodyne call to heal “our divisions” and discard “inflammatory rhetoric thrown around to advance an agenda.”  Implication: Blame for “inflammatory rhetoric” is equally shared by those who attack cops and those who defend them.  Sorry, Mr. President, those who tell the truth about crime and policing are not part of the problem and they bear no responsibility for the massacre of cops.  The killing of cops is furthered exclusively by those peddling a false narrative that cops harbor lethal bias toward blacks.  Obama should call for the Black Lives Matter movement to fold its tent—and he himself should start telling the truth about inner-city crime.
Source>http://www.city-journal.org/html/fire-spreads-14652.html
Posted by theodore miraldi at 8:54 AM