The Rage of Failure

throughout the West because that is the only

argument they can make for their own society. 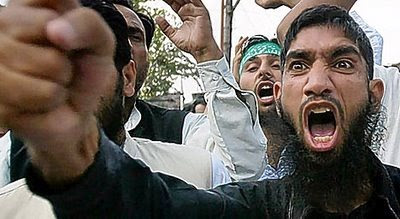 
One of the most dangerous lies of political correctness is the equality of different civilizations.  The rage of Islam is largely rooted in the reality that while Islam destroyed Persian, Byzantine, and Hindu civilizations, it replaced those civilizations with nothing.  The poor backwaters of Europe first halted Islamic imperialism and then produced a flourishing of science, enterprise, art, and government that left the once great lands in Egypt and Iraq and Iran as exporters of only oil and terrorism.
So embittered young Moslems murder innocents throughout the West because that is the only argument they can make.  The logical response, adopting the superior values of the Judeo-Christian West, chokes on this incoherent rage.  This explains the irrational hatred of Israel and the persecution of Christian minorities in the region: Israel works, just as Christian Lebanon once worked (when it was Christian), and this is an intolerable affront to militant Moslems.
The flow of illegal immigration into the United States from Latin America is often made by families desperate to find a better life – and we can sympathize with them, even though that sympathy cannot descend into allowing violation of our immigration laws.  There is a separate thread, however, of Hispanics who wish to blame the misery of their homelands on the prosperity and safety of America.
The obvious cure for the failure of Latin America is for the citizens of these lands to insist upon the rule of law, honest law enforcement and judges, and limited government.   The term "banana republic" was coined to describe the drearily predictable morass of revolution and military rule or corrupt government that inevitably descends into the breakdown of ordered liberty.
The worst possible action, for everyone's sake, would be to turn the Southwest into an extension of Mexico – and yet that is precisely what some militant Hispanics in America want, ensuring greater misery for everyone to sate their rage at the failure of Latin America over the last two hundred years.
This is the same sort of rage at failure we see by many angry blacks in America, culminating in the assassination of police officers and the venom so well represented by Jeremiah Wright's infamous "God damn America" sermon.  There is a macabre and hypnotic fascination these blacks have toward the imagined suppression of blacks in America.
Even before slavery was ended in America, the nation of Liberia was created for freed slaves to have as their homeland back in Africa.  (Britain created Sierra Leone for similar reasons.)  Haiti was the second nation in the Western Hemisphere to gain independence two centuries ago.  Ethiopia has been ruled exclusively by blacks, except for a brief period from 1936 to 1941.  If white oppression was the problem, then those four nations would be the happiest for blacks in the world.
If white oppression was the problem, then the end of European colonial rule in Africa should have brought a gush of affluence, liberty, and safety.  Sadly, that is not the case at all.  Most of the lands of sub-Saharan Africa are awful places, with poverty, disease, genocide, and corruption the norm.  No sane black in America would want to leave his native land and move back to Africa.
The civilization of Africa, like the civilizations of the Islamic world and Latin America, fails horribly.  The logical response would be to adopt the value system of superior civilizations.  Instead, Islamists despise Western civilization and reach back, incredibly, to the Crusades as inspiration for their hatred or blame America, which never held lands in that region, or Israel, which occupies a tiny strip of land, for the suffering in their world.  In the same spirit of illogical blame, many militant Hispanics sincerely believe that restoring the "stolen" lands from California to Texas into Mexico is somehow noble and wise.  We see in the streets of America blacks who, instead of being grateful that they were born in America, honestly believe that all their problems result from the "vestiges of slavery" or Jim Crow in the South, despite the fact that these wrongs were righted long ago.
This absurd calumny is not only foolish, but evil.  Until we understand precisely what is warring against us, we can never prevail in the attacks upon our way of life.  It is a battle of values and a contest of ideals warring against us.  It is not terrorists we are fighting, but rather the rage of failure.
Source>http://www.americanthinker.com/articles/2016/07/the_rage_of_failure.html
Posted by theodore miraldi at 10:49 AM