The Scientific Method Is RACIST 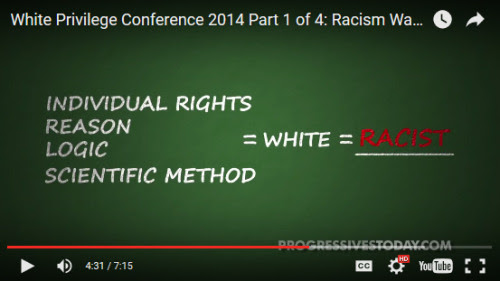 As you might learn in your time at Brown [University], research and academics have often emphasized and valued quantitative data, statistical information, and documentation through written word. Our goals through our research are to push back on this systematic oppression through valuing our personal experience, oral and creative histories and the celebration of collaboration and community. (6:42 min. into the YouTube video "Is the UniversityKilling Free Speech and Open Debate")

The social justice warriors at Brown University are describing an "analysis tool" that has come to be known as critical theory.  When refined to address racial issues (primarily African-American), its name is critical race theory (CRT).
The theoretical framework of CRT was developed in the mid- to late 1980s to better understand black oppression in the United States.  Its major themes now include white privilege and micro-aggression.  It is taught in nearly every grievance department in the country (women's studies, African-American studies, Hispanic studies, and ethnic studies).  The white privilege theme was first introduced in a 1988 paper by Peggy McIntosh.  Ms. McIntosh suggested that issues involving Band-Aid color and free hotel shampoo, rather than education deficiencies and a breakdown in the family structure, are impediments to black progress in America.
Offshoots of CRT have been developed for other marginalized groups.  They include Latino critical race studies (LatCrit), Asian-American critical race studies (AsianCrit), and American Indian critical race studies (TribalCrit).
An example of CRT methodology as applied to FDA drug testing
Clarification of CRT methodology can be by gained from DrugCrit, the author's interpretation and description of how critical race theory methodology would be used to secure FDA approval of a new drug to treat breast cancer.  1) The pharmaceutical company informs the FDA that it has developed a new drug effective in the treatment of breast cancer.  2) The company reminds the FDA that 250,000 new cases of breast cancer are expected to be diagnosed in 2016.  3) Case studies are presented that might, for example, describe the emotional toil of the disease and the impact of a mother's death on her children.  The FDA approval would be granted once the company established that the treatment of breast cancer is important and that a new treatment is desirable.
My profession and training in applied physics (Caltech Ph.D., 1978) fuel my contempt and disgust that CRT has become so widely accepted as a serious analysis tool (primarily in university grievance departments and far left law schools).  Calling one another scholars and inventing pretentious names are not enough to validate a methodology that has no place in a modern world.  It's tragic that white liberal college administrators were so cowed by possible charges of racism and so determined to increase the size of grievance departments (satisfy racial quotas for the faculty) that CRT was accepted as a scholarly endeavor.  One may state without exaggeration that the actions of the school administrators are comparable to hiring astrologers for the astronomy department and witch doctors for the medical schools.
The application of CRT to support legal arguments has been rejected by a number of judges.  For example, Judge Richard Posner of the United States Seventh Circuit Court of Appeals concluded that CRT is a tool used by the "lunatic core of radical legal egalitarianism."  He stated that it turns its back on the Western tradition of rational inquiry and replaces it with fictional, science-fictional, and quasi-fictional anecdotes and storytelling Critical Race Theory is Irrational.
Case Study Comparison of the Scientific Method and CRT Methodology
We now present a comparison of CRT methodology and the scientific method as applied to answer an important racial/economic question: can the poverty and lack of economic development in Africa today be, at least partially, attributed to the slave trade spanning the 500-year period between 1400 and 1900?  (Historical note: The trans-Atlantic slave trade was outlawed in the United States after 1807.)
CRT Analysis: One trained in CRT can immediately answer the question in the affirmative.  This conclusion is then supported by delineating features of the slave trade that were detrimental to Africa, such as its brutality and the profits made by slave traders and slave owners.  The psychological impact on those who remained in Africa could also be used to support the conclusion.
Scientific method analysis: Nathan Nunn, a Harvard economist, used the "western approach" to reach his conclusion.  He collected data that allowed him to generate plots of the per capita GDP of 52 African countries as a function of slave trade activity in each country over a 500-year period.  He employed two different metrics for slave trade activity: 1) number of slaves taken per square mile in each country; 2) fraction of estimated population that was enslaved (normalization needed to adjust for size differences in African countries).
A plot of some of his results is shown below.  Nunn claims that his regression analysis demonstrates with 95% certainty (p-stat = 0.05) that the slave trade is responsible for some of the poverty in Africa today.  The large spread in the data points (R2 = 0.31) suggests that other factors are also in play.

In summary, critical race theory (as applied to demonstrate black oppression in America today) offers the following advantages for liberal research over the scientific method: 1) flexibility to reach any desired result, since the conclusion is the first step in the analysis; 2) personal life experiences can be used in place of actual data to support the conclusion; 3) expertise can be realized by those afflicted by dyscalculia; 4) implicit acceptance and recognition of Western analysis methods can be circumvented.
The author believes he has presented a fair and balanced summary of critical race theory, without misrepresentation or exaggeration.
Source>http://www.americanthinker.com/articles/2016/07/the_scientific_method_is_racist_.html
Posted by theodore miraldi at 10:18 AM