Trump's face says it all

Trump gave Ted Cruz a chance to regain his dignity. Even though Ted Cruz tried to sway delegate votes behind his back Donald Trump showed the character and fairness that makes some men great, and others small. Ted Cruz is no more than a distraction in self promotion at any cost. One can now understand why his colleagues distrust him.
...tmiraldi 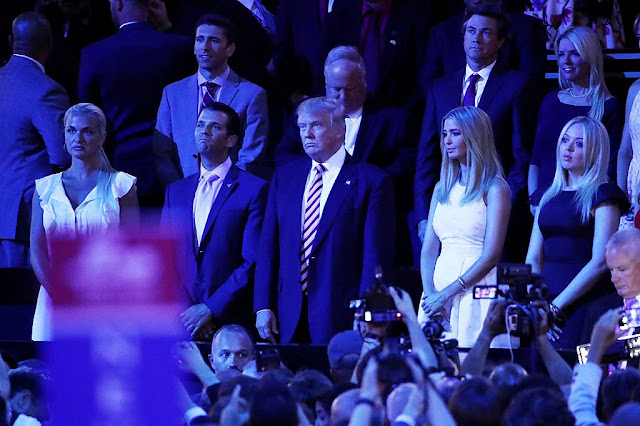 A photo snapped by a Getty Images photographer captured the Trump family's reaction to Sen. Ted Cruz's Wednesday-night speech at the Republican National Convention — and the look on their faces appeared to say it all.

Cruz was booed off the stage after declining to endorse Trump during his speech and instead telling the audience to "vote your conscience" in November.
"To those listening, please, don't stay home in November," Cruz said. "Stand, and speak, and vote your conscience, vote for candidates up and down the ticket who you trust to defend our freedom and to be faithful to the Constitution."
Boos immediately erupted from the audience as attendees started chanting, "We want Trump!"
Source>http://www.businessinsider.com/photo-trump-ted-cruz-speech-rnc-convention-2016-7
Posted by theodore miraldi at 8:32 AM