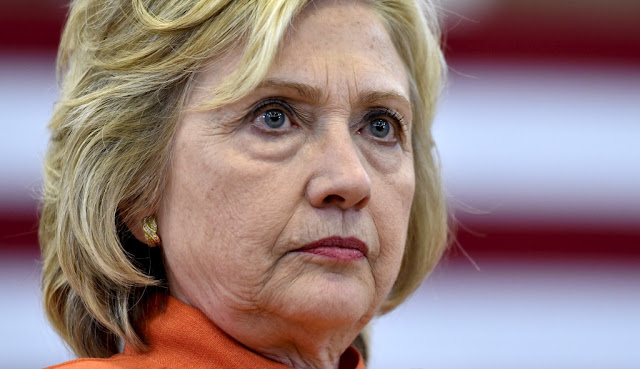 
Hillary Clinton's allies were cast into anger and disbelief over the FBI's stunning announcement that it is reviewing new emails “pertinent” to Clinton’s use of a private email server.
That shocking development — revealed in a letter to Congress by FBI Director James Comey — pushed some of Clinton’s allies past the boiling point.
They said they were “dumbfounded” by the revelation that the new FBI review may have been spurred by a separate investigation into Anthony Weiner sending lewd texts to a minor. Weiner is separated from wife Huma Abedin, one of Clinton’s closest aides.And they worried that Clinton’s unconventional email arrangement had finally caught up to her and might imperil her presidential bid less than two weeks before Election Day.  “I'm livid, actually,” one Clinton surrogate told The Hill. “This has turned into malpractice. It's an unforced error at this point. I have no idea what Comey is up to but the idea this email issue is popping back up again is outrageous. It never should have occurred in the first place. Someone somewhere should have told her no. And they didn't and now we're all paying the price.”Another ally called the campaign’s mood something akin to “paralysis,” and blamed Weiner’s behavior for railroading the campaign.One strategist said the developments would further cement the notion that Clinton has something to hide.“It’s made people think there’s always going to be something around the Clintons, some investigation, some inquiry,” the strategist said. “It never goes away.”Campaign chairman John Podesta and other Democrats lashed out at the FBI over the timing of its announcement and for the lack of details in Comey’s letter.They demanded clarity, fearing that the open nature of the investigation would lead speculation to run wild.“FBI Director Comey should immediately provide the American public more information than is contained in the letter he sent to eight Republican committee chairmen,” Podesta said in a statement.

“Already, we have seen characterizations that the FBI is ‘reopening’ an investigation but Comey’s words do not match that characterization. Director Comey’s letter refers to emails that have come to light in an unrelated case, but we have no idea what those emails are and the Director himself notes they may not even be significant.

“It is extraordinary that we would see something like this just 11 days out from a presidential election,” Podesta added.

Clinton world was already on edge over Podesta's hacked emails, which are being published by Wikileaks on a near-daily basis.

Those revelations have given new ammunition to Republican Donald Trump, who has seized on the leaked emails to accuse the Clintons of running a corrupt network of influence for personal gain.

After the FBI news broke on Friday, the campaign seemed resigned to Trump and other Republicans campaigning on the email issue in the final days of the race.

“In the short term at least, this does provide Republicans with something they can all hang their hat on, at a time when they've been fighting with each other so much — so that can have a salutary effect by shoring up the GOP base and distract from the daily drama around Trump himself,” one longtime Clinton adviser said.

The surrogate predicted the news would also hurt Democrats in down ballot elections.

“I assume Senate Democrats are peeing in their pants right now,” the surrogate said. “The [Republican] ads are being cut as we speak.”

At the same time, other Democrats interviewed by The Hill were taking the FBI letter in stride.

They believe that the presidential race is set and will not be meaningfully impacted by Comey’s announcement. Millions of people voted early, when Clinton held about a 6-point lead nationally.

And Democrats believe scandal fatigue has set in over the emails, essentially rendering new developments meaningless.

Voters have been hearing about Clinton’s email troubles for more than a year, Democrats say, yet she’s favored to win the White House.

“This is just a distraction,” said Democratic pollster Mark Mellmann. “People had already reached their conclusions about the emails. Certainly everyone on my side of the aisle would rather be talking about something else, but I don’t think it’s sufficient to change the outcome.”

Rather than panic over Clinton’s new troubles, Democrats expressed outrage at FBI director Comey for dropping what they view as a politically motivated bombshell close to the election.

“It is extraordinary for the FBI director to do this 11 days before the election,” said Democratic strategist Steve McMahon. “It violates the Justice Department’s rules about engaging in investigations in a way that might impact our democracy. It is extraordinary and very, very surprising.”
Source>http://thehill.com/blogs/ballot-box/presidential-races/303402-anger-disbelief-in-clinton-camp
Posted by theodore miraldi at 11:23 AM