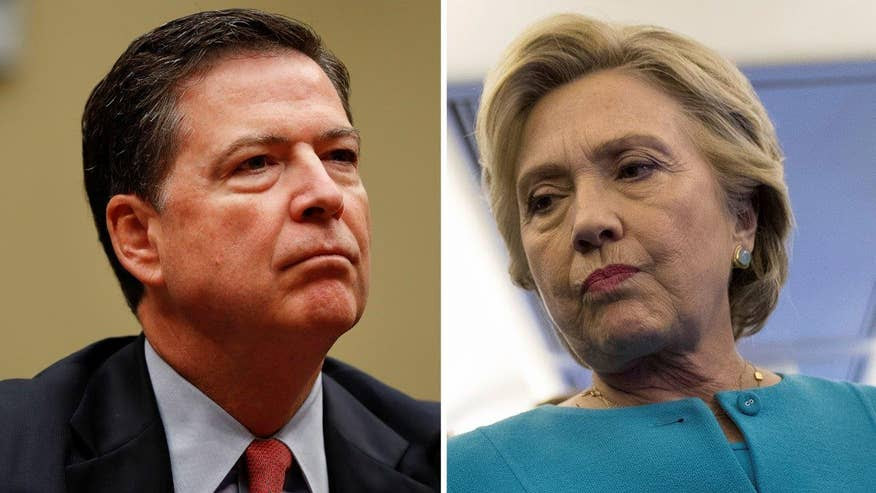 FBI Director James Comey told his bureau he broke with custom in alerting lawmakers that the investigation into Hillary Clinton’s private email server was being reopened because of its political sensitivity.
In an internal memo obtained by Fox News, the beleaguered director noted that the FBI typically would not communicate with the public when reopening a case, according to a Department of Justice source. But Comey said he had to in this case because Clinton is seeking the White House in an election on Nov. 8.

Expand / Contract
FBI letter from Director James Comey (Fox News)
“Of course we don’t ordinarily tell Congress about ongoing investigations, but here I feel an obligation to do so given that I testified repeatedly in recent months that our investigation was completed,” Comey wrote. I also think it would be misleading to the American people were we not to supplement the record.
“At the same time, however, given that we do not know the significance of this newly discovered collection of emails, I don’t want to create a misleading impression,” Comey’s letter continued. “In trying to strike that balance, in a brief letter, and in the middle of an election season, there is significant risk of being misunderstood, but I wanted you to hear directy from me about it.”
The bombshell revelation that newly discovered emails had prompted a new look into whether Clinton or those around her had broken the law my mishandling sensitive information rocked the race for the White House Friday.
Comey informed eight Republican lawmakers that new emails had surfaced that were relevant to the investigation, and warranted a new look.
Comey announced in July that the FBI had wrapped up a year-long investigation into Clinton’s use of a private email server for official business and concluded that while she was “extremely careless,” he could not recommend that the Justice Department seek an indictment. The decision was blasted by Republicans, and FoxNews.com reported earlier this month that career DOJ and FBI workers were furious.
Word of the server, at Clinton’s home in Chappaqua, N.Y., first broke in early 2015. Clinton had used the private email server to conduct government business while serving from 2009-2013, but insisted that she handed over all work-related emails to the State Department.
The FBI investigation determined that thousands of messages that would later be marked classified by the State Department retroactively were on the server. Federal law makes it a crime for a government employee to possess classified information in an unsecure manner, and the relevant statute does not require a finding of intent.
Source>http://www.foxnews.com/politics/2016/10/28/exclusive-comey-memo-to-fbi-staffers-says-election-timing-required-disclosure-renewed-probe.html
Posted by theodore miraldi at 9:28 PM