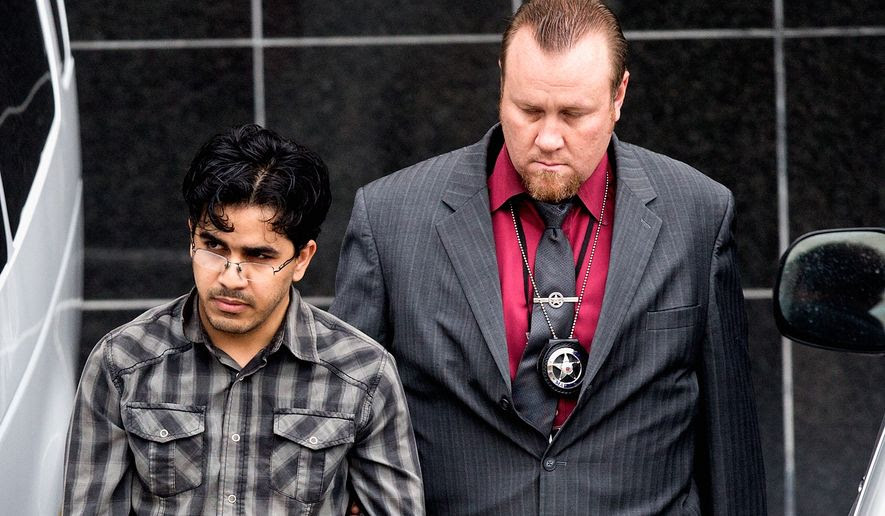 A man who came to the U.S. as a refugee from Iraq admitted in court papers Monday that he taught himself to build detonators for improvised explosive devices, trained to use automatic rifles and plotted to sign up as a martyr for the Islamic State group.
Omar Faraj Saeed Al Hardan’s case is a black eye for the Syrian refugee program, which officials said they modeled on the Iraqi program, using lessons learned to create the vetting system that President Obama and other top officials have promised would weed out terrorists.
But Al Hardan managed to get into the U.S. in 2009 as a teenager after spending time in refugee camps in Jordan and Iraq. Two years after he arrived, he was granted a green card by the Obama administration and quickly began to plot to join one of the terrorist networks fighting in the Middle East.
Federal agents sniffed him out in 2014 and had an informant make contact with him, observing Al Hardan take a loyalty oath to the Islamic State and train with an AK-47 rifle.
He agreed to plead guilty to one terrorism charge and will be sentenced in January.
U.S. Citizenship and Immigration Services, the agency that approved Al Hardan’s refugee application, said it wouldn’t comment on his specific case, but insisted it is taking steps to weed out terrorists.
“This screening process has been enhanced over the last few years,” said James R. McKinney, a spokesman for the agency, though he refused to disclose the enhancements, citing security reasons.
Lawmakers on Capitol Hill have said they are worried about the thousands of Syrian refugees Mr. Obama has vowed to bring into the country, citing statements by top security officials that the U.S. doesn’t have access to databases to properly vet the applicants.
USCIS Director Leon Rodriguez has dismissed those concerns, saying his officers are trained to spot dangerous cases. He pointed to Iraq as the testing ground that gave him confidence with the Syrian program.
That should be cold comfort, said Matthew O’Brien, a former USCIS employee who is now research director at the Federation for American Immigration Reform. Mr. O’Brien said the U.S. government had more resources in Iraq and still wasn’t able to properly check applicants.
“The overall system is grievously broken,” he said. “Saying the Iraq program is a model — it’s the model for a failing system overall, that doesn’t work. The Syrian situation is marked by an absence of all of the things you need for a program to be successful.”
Al Hardan was one of two men admitted as refugees from Iraq who face criminal terrorism-related charges.
Aws Mohammed Younis al-Jayab, 23, was indicted this year in federal court in California on charges of lying about his terrorist background to immigration officials. He was later indicted in federal court in Illinois for attempting to aid terrorists.
Mr. al-Jayab came to the U.S. as a refugee in 2012 and immediately began to talk about returning to the Middle East to join the terrorist fight, prosecutors charge. According to his social media posts, he did go back in November 2013 and stayed through January 2014.
He later lied to immigration authorities, saying he made the trip to visit his grandmother in Turkey, prosecutors said.
Mr. al-Jayab, an Iraqi-born Palestinian, is a particularly troubling case because his last location before he was admitted to the U.S. as a refugee was in Syria. That suggests the vetting process for those coming from that troubled location isn’t as foolproof as administration officials have said.
Mr. al-Jayab and Al Hardan are two of more than 100,000 Iraqi refugees who have been accepted into the U.S. in the past seven years.
The Syrian program is just starting. Mr. Obama vowed to welcome 10,000 Syrians in fiscal year 2016 and ended up with 12,587. So far this fiscal year, which began Oct. 1, the administration has approved 852 Syrians and 877 Iraqis as refugees.
With an ocean separating the U.S. from the Middle East, American officials have an easier time than Europeans, who have been hit with a wave of migrants fleeing unrest.
Attackers who came in the flow of Syrian refugees have been implicated in several terrorist strikes, including last year’s Paris massacres.
At a joint press conference Tuesday with Italian Prime Minister Matteo Renzi, Mr. Obama said the two men talked about the need to address the migration crisis in Europe, calling it a “strategic interest” for the U.S., in part because of the “distorting effects that it can have on European politics if the sense is that the influx of migration is disorderly, chaotic and overwhelms European countries.”
Italy, in particular, faces a flow of migrants from Libya and elsewhere in North Africa.
Mr. Obama said the U.S. and its allies also must address long-term problems “to help these countries that are having difficulties, where people feel either unstable, insecure or just hungry and in search of opportunity.”
He said the bigger issue in the U.S. is not Middle Eastern or African refugees, but Central Americans fleeing violence in their home countries and enticed by relaxed enforcement of immigration laws.
Mr. Obama said he has given Vice President Joseph R. Biden the task of trying to boost the economy and law and order in Guatemala, Honduras and El Salvador.
“But that’s not going to happen overnight,” Mr. Obama said. “That will be a decadelong process potentially. In the meantime, we insist that those countries cooperate with us to send a message to the populations that it is a dangerous trip to reach the United States. And if you get here, you’re likely to be turned back.”
⦁ Dave Boyer contributed to this report.
Source>http://www.washingtontimes.com/news/2016/oct/18/syrian-refugee-admits-terrorist-intentions-in-blac/
Posted by theodore miraldi at 5:06 PM