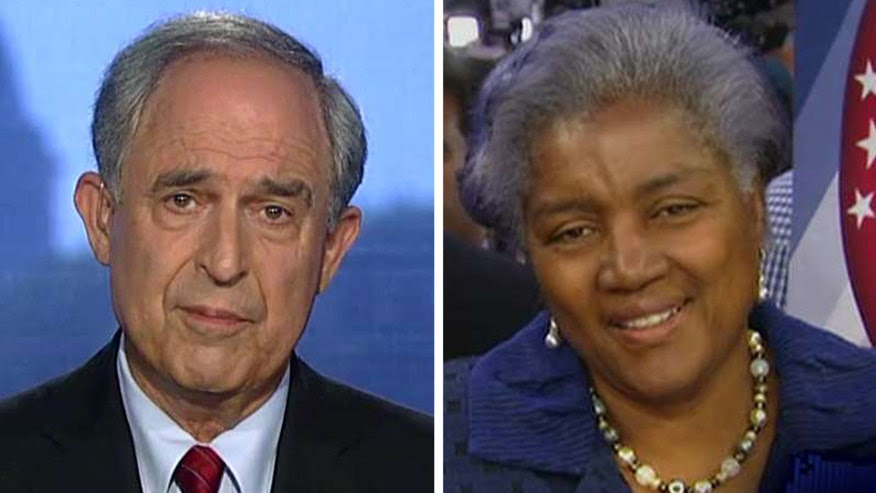 Another leaked email has emerged showing Democratic National Committee boss and former CNN contributor Donna Brazile sharing a debate question in advance with the Hillary Clinton campaign -- despite Brazile's persistent claims to the contrary.
CNN announced in a statement soon after the email became public Monday that Brazile had tendered her resignation and the network accepted it on Oct. 14, days after the controversy over Brazile tipping off the Clinton campaign initially broke.
According to documents released Monday by WikiLeaks, Brazile sent Clinton Communications Director Jennifer Palmieri an email titled, “One of the questions directed to HRC tomorrow is from a woman with a rash,” the night before the March 6 CNN primary debate in Flint, Mich.
“Her family has lead poison and she will ask what, if anything, will Hillary do as president to help the ppl of Flint,” Brazile wrote.
BRAZILE DENIES RECEIVING QUESTION BEFORE MARCH TOWN HALL
The following night, Lee-Anne Walters, a mom whose twin boys stopped growing and whose daughter lost her hair during the Flint water contamination crisis, posed a question to both Clinton, the eventual Democratic presidential nominee, and her primary opponent Vermont Sen. Bernie Sanders.
“After my family, the city of Flint and the children in D.C. were poisoned by lead, will you make a personal promise to me right now that, as president, in your first 100 days in office, you will make it a requirement that all public water systems must remove all lead service lines throughout the entire United States, and notification made to the — the citizens that have said service lines?” Walters asked.
Clinton responded with a lengthy answer that moderator Anderson Cooper had to twice interrupt in an attempt to keep to the agreed-upon time limit. Clinton’s remarks drew applause from the crowd, though she wound up ultimately losing the state’s primary to Sanders two days later.
The apparent email tip-off was included in the latest trove of messages hacked from Clinton Campaign Chairman John Podesta’s Gmail account and posted by WikiLeaks.
Brazile had been under fire over an earlier email chain appearing to show her tipping off the campaign before a town hall event later that same month. That exchange began with Brazile sending Palmieri the text of a question about the death penalty in an email with the subject line: “From time to time I get the questions in advance.”
After Palmieri responded, Brazile wrote back: “I’ll send a few more.”
Roland Martin asked the death penalty question verbatim the next night during a CNN town hall.
Brazile's role as a CNN contributor was suspended when she took over as interim DNC head in July, but on Oct. 14, in light of the email revelations, CNN said it accepted her full resignation.

Donna Brazile  ✔@donnabrazile
Thank you @CNN. Honored to be a Democratic Strategist and commentator on the network. Godspeed to all my former colleagues.

"We are completely uncomfortable with what we have learned about her interactions with the Clinton campaign while she was a CNN contributor," the network said Monday in a statement.
Brazile on Monday tweeted a "thank you" to CNN and in a second tweet told the media to refer to an Oct. 11 statement she gave to Politico about the controversy.
“As a longtime political activist with deep ties to our party, I supported all of our candidates for president," Brazile's statement said. "I often shared my thoughts with each and every campaign, and any suggestions that indicate otherwise are simply untrue. As it pertains to the CNN Debates, I never had access to questions and would never have shared them with the candidates if I did."
Brazile, in an interview with Fox News Channel’s Megyn Kelly on Oct. 19, again denied aiding Clinton during the primaries.
“Well, Kelly, since I play straight up and I play straight up with you, I did not receive any questions from CNN,” she said.
When Kelly pressed, Brazile said she was being persecuted and questioned the credibility of the hacked files.
“As a Christian woman, I understand persecution, but I will not sit here and be persecuted,” Brazile said. “Your information is totally false.”
Source>http://www.foxnews.com/politics/2016/10/31/new-email-shows-dnc-boss-giving-clinton-camp-debate-question-in-advance.html
Posted by theodore miraldi at 1:27 PM