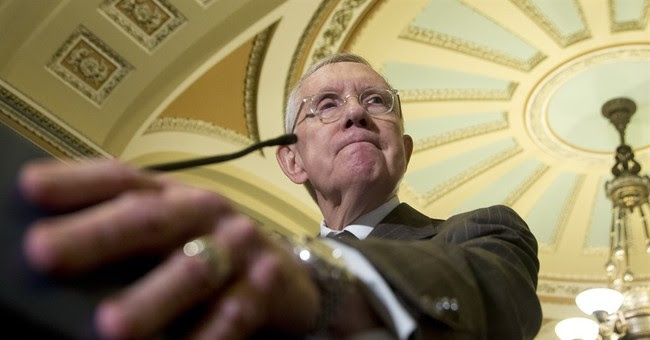 Leah Barkoukis
As Matt reported over the weekend, since the announcement that the FBI is reopening its investigation of Clinton’s emails, James Comey is taking shots from all angles. Sen. Harry Reid even claimed that he’s violating federal law.
“I am writing to inform you that my office has determined that these actions may violate the Hatch Act,” the Senate minority leader wrote in a letter to Comey. “Through your partisan actions, you may have broken the law.”

The Hatch Act prohibits FBI officials from using their official authority to influence an election. Reid said that by releasing this information, which he says is not conclusive or pertinent, Comey may have broken the law. Reid referenced a memo from Deputy Attorney General Sally Yates from March of this year that establishes all Justice Department employees, including Comey, are subject to the Hatch Act.
Reid accused Comey of having intent to aid one political party over the other in the election and called his behavior a "double standard" due to the fact that, as Reid claimed in the letter, Comey has information related to Donald Trump's dealings with Russia.

"I wrote to you months ago calling for this information to be released to the public," Reid wrote in the letter. "And yet, you continue to resist calls to inform the public of this critical information."
"By contrast, as soon as you came into possession of the slightest innuendo related to Secretary Clinton, you rushed to publicize it in the most negative light possible."
But Fox News anchor Brit Hume was quick to put to the accusation to rest, calling it “BS” in a tweet Sunday evening.

How can you tell the claim of a Hatch Act violation against Comey is bs? Harry Reid is making it. https://t.co/aqmtqTT5mR
— Brit Hume (@brithume) October 30, 2016

Reid is retiring at the end of his term.
Source>http://townhall.com/tipsheet/leahbarkoukis/2016/10/31/brit-hume-slams-harry-reids-suggestion-that-fbi-director-broke-the-law-n2239314
Posted by theodore miraldi at 8:45 AM