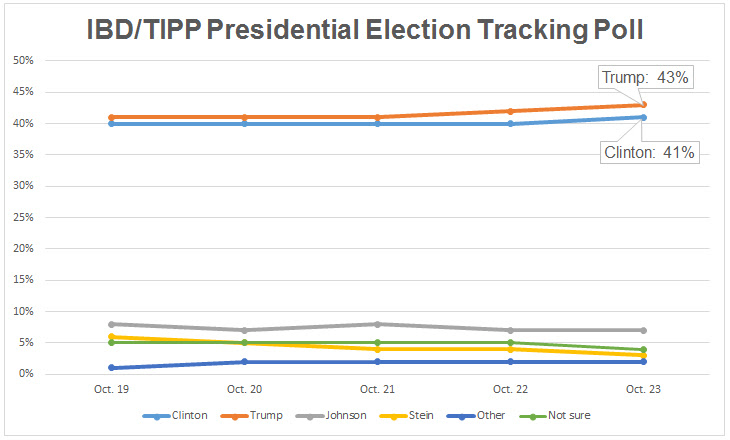 John Melin.
With 16 days to go until November 8, Donald Trump leads Hillary Clinton by 2 percentage points — 43% to 41% — in a four-way race, according to the latest IBD/TIPP presidential tracking poll.
Libertarian Party candidate Gary Johnson saw his support held steady at 7%, while the Green Party's Jill Stein dipped to 3%.
Unrounded, Trump leads 42.6% to 40.8% — a 1.8-point edge — with Johnson at 7.2% and Stein at 3.3%.
Trump also holds a nearly one-point lead in a two-way matchup — 43.2% to 42.3%.
The IBD/TIPP poll results continue to show a much closer race than most other nationwide polls. Only the Rasmussen poll shows Trump ahead in a four-way contest (by two points). The Real Clear Politics average has Clinton up by 5.9 points. And Clinton leads by an average 5.8 points in the latest two-way matchup polls.
The poll results include responses from 783 likely voters, with a weighted partisan breakdown of 282 Democrats, 226 Republicans, and 259 Independents. The results reflect the rolling average of six days' worth of polling, with a margin of error of +/- 3.6 percentage points.
For daily updates until the election and full details, including demographic breakdowns of results, follow the IBD/TIPP Presidential Tracking Poll.
Trump does better than Clinton among men (48% to 34%), lower-income voters (48% to 35%), rural voters (60% to 22%), and those who express a religion.
Clinton beats Trump with women (46% to 38%), voters ages 18-44 (41% to 34%), the wealthy (47% to 38%), and investors (48% to 38%).
On the campaign trail, Trump was in Gettysburg, Pa., on Saturday, where he announced his "Contract with the American Voter" — a list of 28 actions he promises to take in his first 100 days as president, including tax cuts, immigration reform, freezing federal hiring, regulatory reforms, bans on lobbying for foreign governments by public officials, and many other proposals Trump has made during his campaign.
Trump said his focus would be to "restore prosperity to our country, secure our communities, and honesty to our government."
He also made news over the weekend saying he would sue the women who have been accusing him of inappropriate behavior.
Clinton, meanwhile, has been acting as if the presidential race is all but won. Over the weekend she was, according to The New York Times, "working to ensure a victory that is decisive enough to earn a mandate for her presidency."
The Washington Post reported that "emboldened by polls predicting an electoral-college landslide in the presidential race, Clinton is shifting her strategy to lift up other Democrats coast to coast."
Politico reported that Clinton "is now more focused on electing other Democrats in the final days of the 2016 campaign than her Republican opponent."
Source>http://www.investors.com/politics/trump-up-2-points-nationwide-while-clinton-campaigns-as-if-the-race-is-already-won-ibdtipp-poll/

Posted by theodore miraldi at 2:45 PM