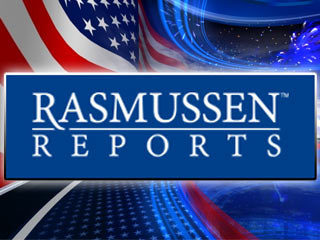 Clinton and Trump were tied yesterday at 42% apiece. Clinton held a seven-point lead at the beginning of last week just after the airing of an 11-year old video showing Trump making graphic sexual remarks, but she began losing ground after the second presidential debate. The lead has been shifting back and forth since late last week.

Rasmussen Reports updates its White House Watch survey daily Monday through Friday at 8:30 am Eastern based on a three-day rolling average of 1,500 Likely U.S. Voters. Last night’s surveying was completed prior to the candidates’ final debate in Las Vegas.

(Want a free daily e-mail update? If it's in the news, it's in our polls). Rasmussen Reports updates are also available on Twitter or Facebook.

The survey of 1,500 Likely Voters was conducted on October 17-19, 2016 by Rasmussen Reports. The margin of sampling error is +/- 2.5 percentage points with a 95% level of confidence. Field work for all Rasmussen Reports surveys is conducted by Pulse Opinion Research, LLC. See methodology.

Most voters still share unfavorable opinions of the two major party candidates for president. Just 24% say they’ve changed the way they were going to vote after watching the debates between presidential candidates.

The latest survey finds Trump with the support of 82% of Republicans, 14% of Democrats and a six-point lead among voters not affiliated with either major political party. Clinton earns 77% of the Democratic vote and nine percent (9%) of Republicans.

Democrats, however, are nearly twice as likely as Republicans to think their presidential nominee will help congressional candidates in their party.

Twenty-two percent (22%) of unaffiliated voters say they could change their minds between now and Election Day, compared to just eight percent (8%) of both Democrats and Republicans.

Trump has a 14-point lead among men; Clinton leads by eight points among women. Women are slightly more certain of their vote than men are. Those under 40 continue to prefer Clinton; older voters favor Trump.

Clinton retains her sizable advantage among blacks. Trump is still ahead among whites. The candidates are tied among other minority voters.

Nearly half of all voters still say their choice this presidential election will be the lesser of two evils, although Trump supporters feel that way more strongly than Clinton voters do. Fortunately for both major party candidates who have been beset with questions about their honesty and integrity, most voters put their policy positions ahead of their character.

Voters aren’t buying the story that the Russians are trying to manipulate the election for Trump but think the U.S. media is trying to swing things for Clinton.