Democrats Act to SAVE ObamaCare from GOP REPEAL

Obama to Hill, 'Day of Action' 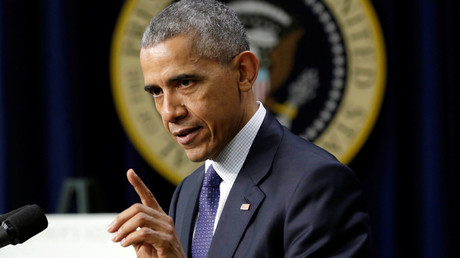 President Obama’s trip next week to Capitol Hill to discuss ObamaCare is only the latest -- and most visible -- sign that Democrats are ready to fight Republicans’ plans to change the president’s signature health-care law as well as Medicaid and Medicare.
Obama will visit Wednesday with House and Senate Democrats, the day after the 114th Congress convenes and Republicans, who have the majority in both chambers, are expected to start repealing and replacing ObamaCare.
“Step one is the ObamaCare replacement legislation at the start of the year,” Senate Majority Leader Mitch McConnell said a few weeks ago, as members closed out their 2016 session.
“Bring it on,” incoming Senate Minority Leader Chuck Schumer, D-N.Y., said in response.
Fellow Democrats have given essentially every indication that they also intend to fight GOP efforts to change government-subsidized health care programs and to rally support among Americans for their efforts.
Earlier this week, House Democrats participated in a conference call that included discussions on protecting ObamaCare and entitlement programs targeted by Republicans, a congressional source told FoxNews.com.
House Minority Leader Nancy Pelosi, California, last week told fellow Democrats that they “stand ready to fight vigorously for America's hard-working families” against such efforts, including  those by incoming Republican President Donald Trump, who has called ObamaCare a “disaster” and vowed, if elected, to repeal the 2010 law.
She also urged them to hold events to warned voters in their district about the GOP plans, including what she says is House Speaker Paul Ryan’s design to “privatize” Medicare, federally subsidized health insurance for seniors and the disabled.
Pelosi, Schumer and Vermont Sen. Bernie Sanders, Independent, have also called for a national “Day of Action” on January 15, five days before Trump’s inauguration to highlight GOP efforts to cut or significantly change “vital and necessary health programs.”
As proof that Trump is determined to repeal and replace at least major parts of ObamaCare, the government-mandate insurance that has become increasingly increasing expensive for Americans, they point out that the president-elect has nominated Georgia GOP Rep. Tom Price to run the Department of Health and Human Services. Price is a major critic of ObamaCare.
Ryan, R-Wis., has laid out a plan to make changes to ObamaCare, Medicare and Medicaid, in an attempt to create a single health-care plan and give Americans what he calls better access to “quality, affordable health care.”
"ObamaCare is making things worse by the day. It drives up premiums and deductible costs for individuals, families and businesses,” Ryan says in his “Better Way” plan. “ObamaCare must be fully repealed so we can start over and take a new approach.”
Still, congressional Republican leaders have made clear in recent weeks that a full ObamaCare replacement plan could take two to four years, with no viable alternative in place and the likelihood of leaving roughly 22 million Americans without insurance before the 2018 midterm elections.
Source>http://www.foxnews.com/politics/2016/12/31/democrats-act-to-save-obamacare-from-gop-repeal-obama-to-hill-day-action.html
Posted by theodore miraldi at 12:43 PM