Krauthammer: ‘Obama SEES HIMSELF As the GOD Hovering Over the Country’

‘This is about as anti-democratic as you can get’ 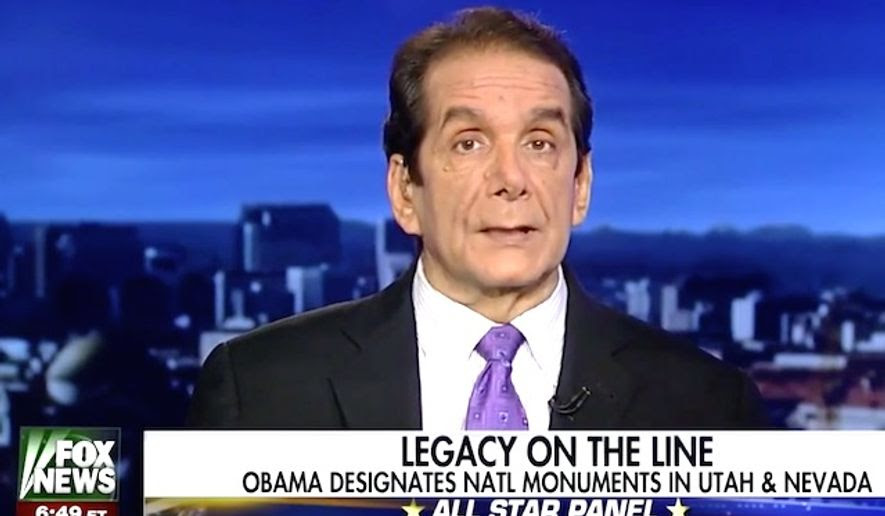 
Syndicated columnist and Fox News contributor Charles Krauthammer says President Obama’s new sanctions against Russia stem from a god complex.
The commander in chief expelled 35 Russian diplomats and sanctioned nine individuals and entities on Thursday due to “significant malicious cyber-enabled activities” during the U.S. presidential election. Mr. Krauthammer told a panel on “Special Report” that the timing of the sanctions — months after the alleged attacks — is “ridiculous.”
“If you’re going to do this, you do it when it happens. You don’t say to Vladimir Putin during an election, ‘Cut it out.’ This is adolescent. You say there will be consequences, and you make them stick,” the pundit said.
Mr. Krauthammer soon added that imposing sanctions just weeks before President-elect Donald Trump takes office is “about as anti-democratic as you can get.”
“He is doing all these things that have been explicitly rejected by his own party and then he doesn’t have the courage of his own convictions, getting them done to lock in hissuccessor,” he said, The Daily Caller reported. “Obama sees himself as the god hovering over the country dispensing goodies to the extent that he’s got control. And he figures, ‘I’ve got control here. No one can stop me.’ Maybe it will be somewhat irreversible.”
The White House maintains that Russian intelligence agencies acted to undermine the electoral process as Democrat presidential nominee Hillary Clinton and Mr. Trump campaigned to be the 45th U.S. commander in chief.
“Russia’s cyberactivities were intended to influence the election, erode faith in U.S. democratic institutions, sow doubt about the integrity of our electoral process, and undermine confidence in the institutions of the U.S. government. These actions are unacceptable and will not be tolerated,” the Obama administration said in a statement released Thursday night.
Diplomats targeted by the White House were given 72 hours to leave the country.
Two compounds in Maryland and New York have also been closed due to alleged intelligence gathering by Russian state actors.
Source>http://www.washingtontimes.com/news/2016/dec/30/charles-krauthammer-on-russia-sanctions-obama-sees/
Posted by theodore miraldi at 8:08 AM