‘We have, by no means overcome the legacies of slavery and Jim Crow and colonialism and racism’ 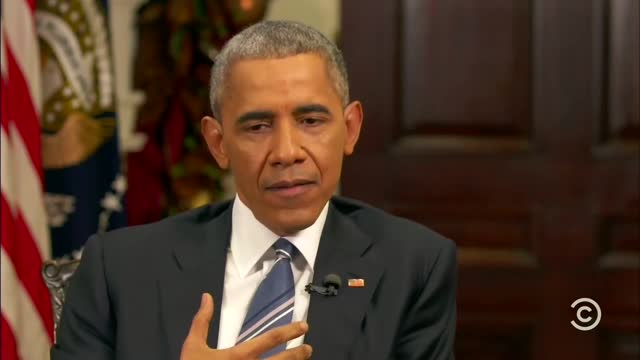 America is still struggling to overcome its "legacies of slavery, Jim Crow, colonialism, and racism," President Obama told Comedy Central Monday night.
Appearing on "The Daily Show," Obama was asked about how he speaks to crowds about race.
How does he "skirt that line between speaking your mind and sharing your true opinions on race whilst, at the same time, not being seen to alienate some of the people you are talking to," host Trevor Noah asked.
"You know, my general theory is that, if I was clear in my own mind about who I was, comfortable in my own skin, and had clarity about the way in which race continues to be this powerful factor in so many elements of our lives," Obama said. "But that it is not the only factor in so many aspects of our lives, that we have, by no means overcome the legacies of slavery and Jim Crow and colonialism and racism, but that the progress we've made has been real and extraordinary, if I'm communicating my genuine belief that those who are not subject to racism can sometimes have blind spots or lack of appreciation of what it feels to be on the receiving end of that, but that doesn't mean that they're not open to learning and caring about equality and justice and that I can win them over because there is goodness in the majority of people."
Elsewhere in the interview, Obama attacked the media for focusing on the hacked DNC emails during the campaign -- even though there was nothing "explosive" in the exposed communications. It was "fairly routine stuff," he insisted.
Obama also advised Republicans that if they want to fix ObamaCare, two ideas are creating a "public option," and adding "more subsidies."
Source>https://news.grabien.com/story.php?id=1879
Posted by theodore miraldi at 9:20 AM