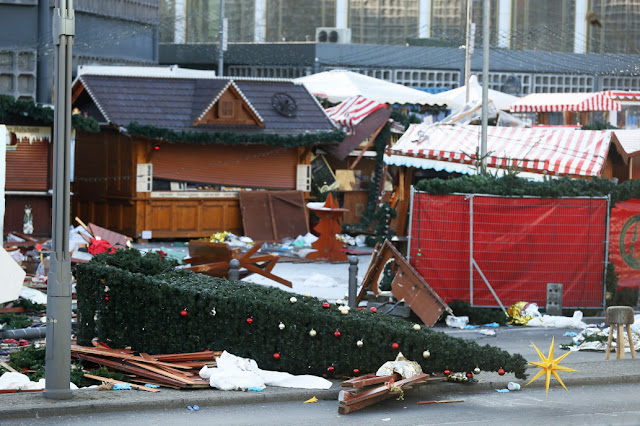 German police are hunting for a Tunisian man in connection with the deadly truck attack at a Berlin Christmas market after finding an identity document under its driver’s seat, according to reports.

The man is named in the document as Anis A, who was born in 1992 in the southern Tunisian city of Tataouine, Reuters reported, citing German news site Spiegel Online.
He belongs to a large Islamist network, uses three different names and is known to police, according to reports in German newspapers Bild and Allgemeine Zeitung.
The suspect is being sought in the western state of North Rhine-Westphalia, Agence France-Presse reported.
Authorities have warned that the attacker is on the loose and may be armed. It is unclear if the perpetrator was acting alone or with others.
Police on Tuesday released their former chief suspect, a 23-year-old Pakistani asylum seeker identified as Naved B, for lack of evidence.
The head of the Association of German Criminal Detectives, Andre Schulz, told local media that police hoped to make another arrest soon.
“I am relatively confident that we will perhaps tomorrow or in the near future be able to present a new suspect,” he said, Reuters reported.
Twelve people were killed and 48 injured in what German authorities have called a “terrorist attack” late Monday when the truck — belonging to a Polish freight company — plowed into a crowd of shoppers.
The Polish driver of the truck, who was found shot dead in the cabin, was alive until the attack took place, Bild reported. An investigator said there must have been a struggle with the attacker, who may have been injured.
The ISIS-linked Amaq news agency said “a soldier of the Islamic State” carried out the carnage “in response to appeals to target citizens of coalition countries.”
The site offered no evidence to back the claim and did not identify the attacker. 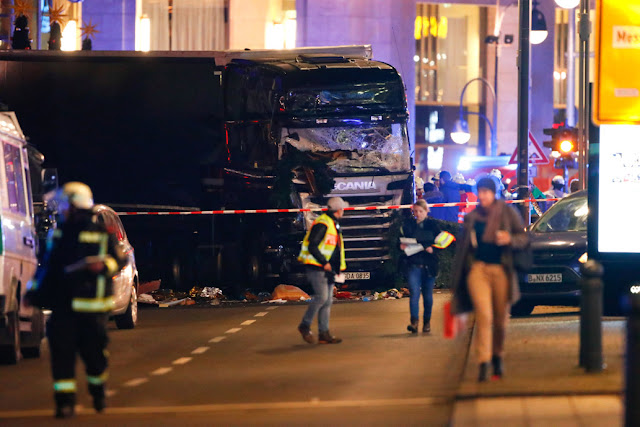 ISIS also claimed responsibility for a similar attack on July 14, when a Tunisian-born man drove a truck through a crowd celebrating Bastille Day in the French city of Nice. Eighty-six people were killed, and the driver was shot dead by police.
Tunisia is one of the biggest suppliers of jihadist fighters — with about 5,500 of its nationals believed to be involved in combat in Syria, Iraq and Libya, AFP reported.
In other developments, German President Joachim Gauck visited some of the wounded at a Berlin hospital, where they are being treated for pelvic and other injuries.
Gauck said he spoke with three patients at the Charite hospital who faced operations on Wednesday and he was impressed by their “composure.”
He also met a man who had rushed to help in the aftermath of the rampage and was hit by a steel beam.
The Charite took in 13 patients after the attack, two of whom died. Medical director Ulrich Frei said that four have “severe trauma of the lower extremities and the pelvis.”
One of those wounded in the attack was an Israeli man and his wife is missing, the Israeli Foreign Ministry said.
Ministry spokesman Emmanuel Nahshon said Wednesday that the man is in stable condition after surgery. Israel is in touch with German authorities to try to find the wife.
He declined to disclose the couple’s personal details, saying only that they were in Berlin on holiday and that their relatives had arrived in Germany on Tuesday.
Meanwhile, Passauer Neue Presse quoted Klaus Bouillon, the head of the group of interior ministers from Germany’s 16 federal states, as saying tougher security measures must be implemented.
“We want to raise the police presence and strengthen the protection of Christmas markets. We will have more patrols,” he said. “Officers will have machine guns. We want to make access to markets more difficult, with vehicles parked across them.”
German Chancellor Angela Merkel has said it would be particularly repugnant if an asylum-seeker seeking protection in Germany was the perpetrator.
Some politicians have blamed her open-door migrant policy for making such attacks more likely.
The anti-immigrant Alternative for Germany, which has won support in the last two years as Merkel’s own popularity has declined, said Germany is no longer safe.
Some politicians have called for changes to Merkel’s immigration and security policies after she allowed more than a million refugees to enter the country in the last two years — many fleeing countries such as Syria, Iraq and Afghanistan.
Bavarian Interior Minister Joachim Herrmann told German radio on Wednesday that there was a higher risk of Islamist attacks because of the influx of refugees.
With Post Wires
Source>http://nypost.com/2016/12/21/police-hunt-for-tunisian-man-in-berlin-christmas-market-attack/
Posted by theodore miraldi at 8:33 AM