Putting the JUSTICE Department Back on Track

Jeff Sessions is the right choice for attorney general 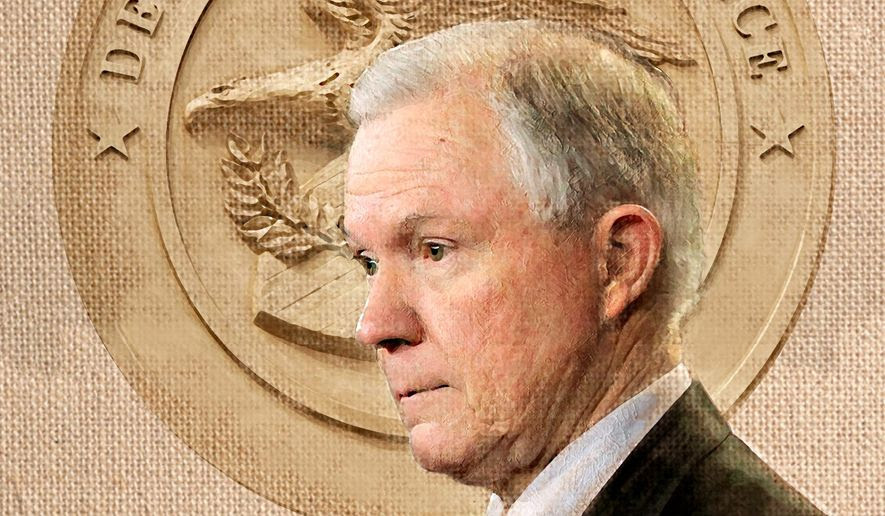 Illustration on Jeff Sessions for Attorney General by Alexander Hunter


ANALYSIS/OPINION:
Americans spoke resoundingly last month that they want our country to chart a new course. A newly-elected president’s first decisions are typically his Cabinet choices, and President-elect Trump is already charting that new course. Nominees such as Sen. Jeff Sessions to be attorney general show that Mr. Trump is serious about getting that job done.
Nearly two-thirds of Americans say that the country has been on the wrong track. That certainly describes the Department of Justice. Just last year, I spoke out about how the department had been politicized, compromised, weakened, and even corrupted. Jeff Sessions is the right person to put the Justice Department back on track.
No attorney general in American history has had Mr. Sessions’ combination of hands-on experience in both criminal justice policy and its implementation. He was a front-line prosecutor for 18 years, 12 of them as United States Attorney. At his confirmation hearing in January, he will appear before the Senate Judiciary Committee on which he has served for 20 years.
The Senate is receiving letters endorsing Mr. Sessions’ nomination from those who know best what the job of attorney general requires. One letter from 10 former attorneys general and deputy attorneys general over the past three decades says that he is “a person of honesty and integrity” who is “superbly qualified by temperament, intellect, and experience to serve as this nation’s chief law enforcement officer.” Another letter from a bipartisan group of former DEA administrators praises Mr. Sessions’ commitment to “the just and fair enforcement of the laws that Congress has written” and concludes that “he is a protector of civil rights and defender of crime victims.”
I have served with Sen. Sessions since he joined the Judiciary Committee in January 1997. We have worked together on legislation to improve forensic science services for law enforcement, promote community policing, help child abuse victims, and prevent gun crimes. He is a serious legislator who knows that prosecutors and law enforcement need commonsense, workable policies from lawmakers to help keep communities safe and protect the rights of all Americans.
Only three attorneys general since the turn of the 20th century have served in the Senate. A good working relationship between the Justice Department and Congress, however, is more important than ever. The Obama administration has fought against legitimate congressional oversight and tried repeatedly, and in different ways, to circumvent Congress to impose a political agenda through the Justice Department and the courts.
Thomas Jefferson wrote that government’s most sacred duty is “to do equal and impartial justice to all its citizens.” Getting the Justice Department back on track means returning to the essentials, spelled out in the Department’s own mission statement: “To enforce and law and defend the interests of the United States according to the law; to ensure public safety against threats foreign and domestic; to provide federal leadership in preventing and controlling crime; to seek just punishment for those guilty of unlawful behavior; and to ensure fair and impartial administration of justice for all Americans.”
No one understands that mission more thoroughly, or believes it more deeply, than Jeff Sessions. I am proud to support Sen. Jeff Sessions to be the next attorney general of the United States. His experience, principles, and common sense are just what the Justice Department needs to chart the right course.
Source>http://www.washingtontimes.com/news/2016/dec/11/jeff-sessions-can-put-the-justice-department-back-/
Posted by theodore miraldi at 9:05 AM