There’s a war on Christmas, and the Christians are winning it 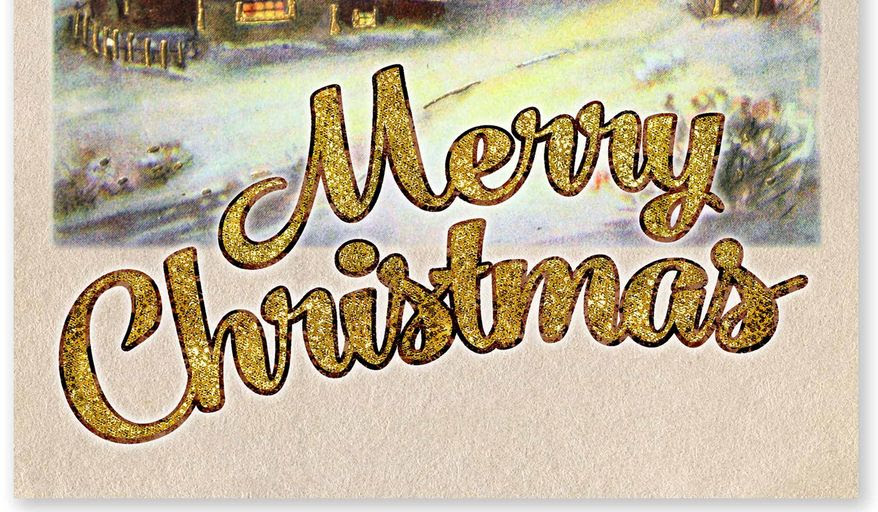 At a rally in Wisconsin last week, President-elect Donald Trump debuted a new podium placard captioned: “Merry Christmas, USA. Thank You Tour 2016.”
Mr. Trump stood in front of six lit Christmas trees and vowed — much like he had throughout the campaign season — that Americans would be able to say Merry Christmas again.
“When I started 18 months ago, I told my first crowd in Wisconsin that we are going to come back here some day and we are going to say ‘Merry Christmas‘ again,” he said. “Merry Christmas. So, Merry Christmas everyone. Happy New Year, but Merry Christmas.”
Liberals dismiss the idea of a “War on Christmas,” and coverage of it in the major newspapers and broadcast news is virtually non-existent. When the topic is broached, it’s often to put down the idea, or to mock it.
The New York Times wrote this week: “There is no evidence of an organized attack on Christmas in the United States.”
In it, the Times quotes the Rev. Barry W. Lynn, the executive director of Americans United for Separation of Church and State, who said the “annual uproar is based on `stories that only sometimes even contain a grain of truth and often are completely false.’”
Except that’s not true.
This year, once again, there are plentiful examples of the left looking to diminish or extinguish the public celebration of Christmas.
In a park in Boca Raton, Florida, a middle school teacher set up a satanic pentagram display next to the town’s nativity scene and menorah. Above the pentagram is a sign that reads: “In Satan we trust. One nation under Antichrist.”
Despite protests from the community, local officials can do nothing about it because it sits in a “freedom of speech zone,” the Palm Beach Post reported. The teacher will also go unpunished because he set up the display in his free time.
President Barack Obama — who has pushed transgender bathroom laws onto the national stage — hasn’t had a Christmas card in any of his eight years as president that said “Merry Christmas.” Instead, all of his cards have featured “Happy Holidays.”
In contrast, The New York Post pointed out George W. Bush’s Christmas cards’ included Bible verses in them.
Earlier this month, an Indiana town had to remove a cross from its Christmas tree, because the American Civil Liberties Union filed a lawsuit, alleging the Latin cross on the town’s square tree violated the establishment clause in the First Amendment.
Public universities are also fretting about Christmas — and how their students may perceive and be offended by the holidays.
Missouri State University issued a list of “holiday decoration guidelines” to its students that warned it would “generally be inappropriate” to display items such as a cross, the nativity scene, drawings of the baby Jesus or Mohammed, and the Bible or the Koran in common areas of the university.
“Images that seem neutral to some may be experienced as religious by others with different traditions,” the school wrote.
As reported by Campus Reform, a conservative higher-education watchdog, Marquette University omitted the word “Christmas” from its annual tree lighting this year — after previously having announcements that referred to the event as a “Christmas tree lighting” that was featured as a “blessing” to “celebrate the start of advent.”
Last year, Harvard University had to issue an apology after it gave its students “holiday place mats for social justice,” that spelled out liberal talking points so its students could combat their conservative family members during Christmas break.
The American Family Association has put together a retailer list of “naughty or nice” companies that use or ignore the word Christmas in their advertising. Among the naughties this year are Barnes & Noble, Victoria’s Secret and Best Buy.
But the tide is turning, and nothing symbolizes that better than Mr. Trump’s victory. Christians — who turned out to support Mr. Trump by an 81 percent margin — have decided to fight back, after long being under siege by the left’s culture war.
Bill O’Reilly, who has continually featured the “War on Christmas” on his Fox News show, declared last week that the war has “basically been won” by conservatives, and that now, it’s just “a clean-up operation.”
And he may be right.
Last week, along with Mr. Trump’s Merry Christmas tour, a Texas judge ordered a school district to restore a Christmas decoration that included a biblical verse recited by Linus in the 1960s TV special “A Charlie Brown Christmas.”
A nurse’s aide Dedra Shannon had put the display on her door, which depicted Linus saying, “For unto you is born this day in the city of David a Savior, which is Christ the Lord … That’s what Christmas is all about, Charlie Brown.”
After an hour-long hearing, Judge Jack Jones ruled that the door display should be put back up with an added line: “Ms. Shannon’s Christmas message.”
Source>http://www.washingtontimes.com/news/2016/dec/22/christians-winning-the-war-on-christmas/
Posted by theodore miraldi at 9:10 AM