Time to FACE REALITY, Obama — Trump is Going to Be President 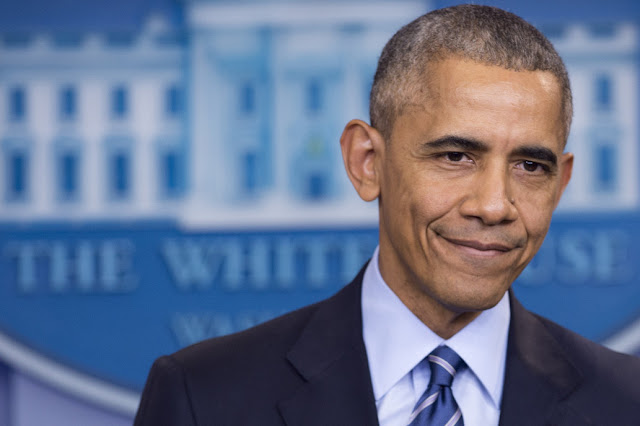 
So this is how it ends — in a whimper wrapped in self-pity and recriminations. With President Obama on the defensive at his final press conference and Hillary Clinton’s last campaign event resembling a wake, the Democratic Party is limping off the stage and into the political winter.
It was supposed to sit atop the national power pyramid for decades, a new paradigm of liberals, progressives, the young, the old, the unions and blacks, Latinos, Muslims and Asians.
The torch would be passed from Obama to Clinton, a liberal Supreme Court would vastly expand executive power and the regulatory state would enforce climate-change orthodoxy on all industry and elitist dictates on every American. Globalism would be the new patriotism.
But a funny thing happened on the way to one-party dominance: The people who work for a living said no, hell no. Their revolt brings Donald Trump to the White House amid hopes of a revival of the economy and of the American spirit.
Thoroughly beaten, the Dems are at their lowest point in nearly a century. From the White House to Congress to statehouses, they are on the outside looking in.
Their punishment was well-deserved, as demonstrated by Obama and Clinton. Full of excuses and blaming everyone except themselves, their closing acts proved it is time for them to go.
They have nothing new to offer, with their vision of the future limited to larger doses of the same failing medicine and their intolerance for disagreement showing they would never learn from their mistakes. Their bad ideas had run their disastrous course.
Yet instead of analyzing what went wrong and trying to find new organizing principles, party leaders and activists are pointing fingers at the FBI and Russia, and engaging in a mad bid to overturn Trump’s Electoral College victory.
Because they are doomed to fail, we could be witnessing the death throes of the Democratic Party as we know it. With Obama and the Clintons encouraging the attempted theft of an election they lost and failing to denounce intimidation and death threats against Trump electoral voters, most Americans have reason to consider the Dems a dead letter.
Yet the final verdict on 2016 depends on Trump’s performance as president. If he delivers “jobs, jobs, jobs” and peace-through-strength abroad, he will forge a new governing consensus and remake the political landscape.
While it’s too soon to know what exactly Trumpism stands for, it’s clear that many Republican orthodoxies and special-interest debts are being tossed overboard. His
Cabinet nominees are incredibly accomplished individuals who come to their new jobs without the burdens of past Washington gridlock. If he can attract centrist-minded
Dems, some of whom he is courting, Trump has a chance to build a pragmatic coalition that keeps faith with mainstream America.
The obstacles, of course, are many. Much of the Islamic world is on fire and the great powers are moving ever closer to confrontation in Europe and Asia.
Obama leaves office with Russia, Iran and China eating our lunch, with the Chinese theft of a Navy drone a goodbye insult. The unspeakable horror of Syria and the rise of Islamic State will forever be part of the 44th president’s legacy.
So, too, will be domestic divisions, which grew more stark and bitter in the last eight years. We are now perilously close to a boil, and that, too, falls partially on Obama’s shoulders given his fear-mongering about Trump.
Against that dark reality, it is reasonable to worry the nation is on the verge of a crack-up. But there is also a possibility that America is on the verge of a new greatness.
It’s up to Trump. The ultimate outsider and a historic disrupter, he bears some responsibility for the polarization. But victory presents him with an opportunity to make government work for the people, instead of the other way around.
He is off to a great start and must stay focused to avoid falling down the rabbit holes of petty disputes. America needs the change he promised and he needs to commit every ounce of his being into keeping that promise. If he succeeds, so will the nation.
Source>http://nypost.com/2016/12/18/time-to-face-reality-obama-trump-is-going-to-be-president/
Posted by theodore miraldi at 10:06 AM