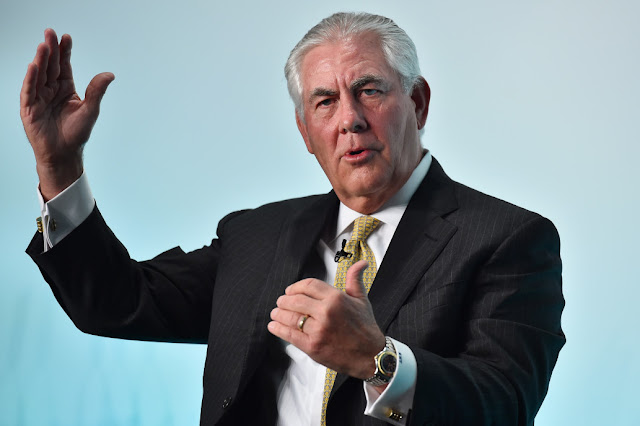 
President-elect Donald Trump will nominate ExxonMobil CEO Rex Tillerson to be the next secretary of state, his transition team announced Tuesday.
Tillerson, who has spent his entire career at the multi-national oil giant, was recommended for the top diplomatic spot by former Defense Secretary Bob Gates, former Secretary of State Condoleezza Rice and former Vice President Dick Cheney.
“We must focus on strengthening our alliances, pursuing shared national interests and enhancing the strength, security and sovereignty of the United States,” Tillerson said in a statement.
“Rex Tillerson’s career is the embodiment of the American dream. Through hard work, dedication and smart deal making, Rex rose through the ranks to become CEO of ExxonMobil, one of the world’s largest and most respected companies,” Trump said in his own statement.
“His tenacity, broad experience and deep understanding of geopolitics make him an excellent choice for Secretary of State. He will promote regional stability and focus on the core national security interests of the United States. Rex knows how to manage a global enterprise, which is crucial to running a successful State Department, and his relationships with leaders all over the world are second to none. I can think of no one more prepared, and no one more dedicated, to serve as Secretary of State at this critical time in our history,” Trump added.
But Tillerson’s confirmation by the Senate is not assured. Already, Republican Senators Marco Rubio (Florida), John McCain (Arizona) and Lindsey Graham (SC) have voiced skepticism toward the oil exec with close ties to Russian strongman Vladimir Putin.
The selection of the next secretary of state has been the most closely watched and dramatic of the transition period, even at times mirroring aspects of a reality TV show.
Trump appeared to court former Republican Republican presidential nominee Mitt Romney, and even met with him for a dinner out in Manhattan.
Trump also seriously considered former New York City Rudy Giuliani, Sen. Bob Corker (R-Tenn.), Ambassador John Bolton, Gen. David Petraeus and Gov. Jon Huntsman (R-Utah).
Romney announced Monday night he was not going to be selected — and thanked Trump for consideration.
“It was an honor to have been considered for Secretary of State of our great country,” Romney said in a statement posted to Facebook.
“My discussions with President-elect Trump have been both enjoyable and enlightening. I have very high hopes that the new administration will lead the nation to greater strength, prosperity and peace.”
Source>http://nypost.com/2016/12/13/trump-confirms-he-will-nominate-exxon-chief-as-secretary-of-state/
Posted by theodore miraldi at 8:10 AM