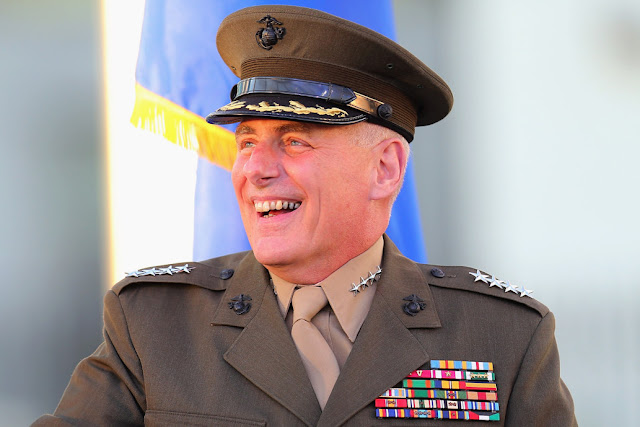 Donald Trump has named Gen. John Kelly to be the next Department of Homeland Security secretary, the transition team announced Monday.
“The American people voted in this election to stop terrorism, take back sovereignty at our borders, and put a stop to political correctness that for too long has dictated our approach to national security. I will tackle those issues with a seriousness of purpose and a deep respect for our laws and Constitution,” Kelly said in a statement.
“I am honored for the opportunity to be back in the service to our country, and our people,” added Kelly, who most recently was in charge of the U.S. Southern Command.
Trump praised his pick as the right man for the job.
“Gen. John Kelly’s decades of military service and deep commitment to fighting the threat of terrorism inside our borders makes him the ideal choice to serve as our Secretary of the Department of Homeland Security,” Trump said in a statement.
“He is the right person to spearhead the urgent mission of stopping illegal immigration and securing our borders, streamlining TSA and improving coordination between our intelligence and law enforcement agencies. With Gen. Kelly at the helm of DHS, the American people will have a leader committed to our safety as well as one who will work hand-in-hand with America’s rank-and-file TSA, ICE and Border Patrol officers,” he added.
The Department of Homeland Security oversees the Customs & Border Protection, Citizenship & Immigration Services, the Coast Guard, the Federal Emergency Management Agency, Immigration & Customs Enforcement, the Secret Service and the Transportation Security Administration.
Source>http://nypost.com/2016/12/12/john-kelly-officially-named-homeland-security-secretary/
Posted by theodore miraldi at 8:16 AM