The Federal Government has enough money to shuttle around Illegals, and tells Senior Citizens and Children living in minority communities across the nation that they will get no increases because of budget restraints. We allow our citizens to suffer while Obama spends our hard earned tax money like water...tmiraldi 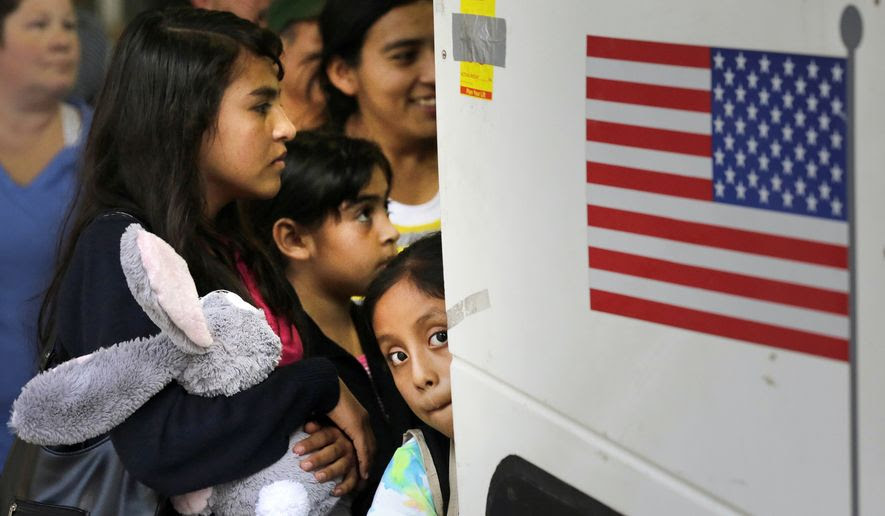 The federal agency that handles deportations spent more than $100 million of its money over the last few years to ferry illegal immigrant children around the U.S., according to calculations by a watchdog group that says the cash could have been better spent on enforcement.

Government figures obtained by the Immigration Reform Law Institute through an open records request show Immigration and Customs Enforcement spent an average of $665 per juvenile in 2014, with most of that going to the cost of airplane flights to shuttle the children among government agencies, to relatives here in the U.S. or back to their home countries — if they’re deported.
At that rate, ICE will spend about $4.5 million flying just the children nabbed at the border in October, and somewhere north of $100 million since the surge began in earnest in 2014.
“It’s insult to injury on a massive scale,” said Dale Wilcox, executive director of IRLI.
He blamed President Obama’s 2012 deportation amnesty for young adult illegal immigrants, the so-called Dreamers, for the surge, saying it enticed tens of thousands of new migrants, particularly juveniles, to take a risk on making the trip.
Instead of being sent back, they are shuttled among various federal agencies until they are eventually delivered to their parents, other relatives or sponsor families — where they often disappear into the shadows.
According to statistics from the Senate Homeland Security Committee, only 3 percent of the more than 120,000 caught over the last few years have been sent home as of June.
That, according to the new Border Patrol chief, serves as an incentive for more to make the journey.
Top political leaders in the Obama administration, however, point the finger elsewhere. They say the blame lies less with U.S. policy and more with conditions in Central America, including poverty and smuggling-cartel violence that have made some areas unlivable.
Whatever the reason, American taxpayers are taking a hit.
ICE officials couldn’t provide updated cost data for ferrying children inside the U.S., but said the overall cost to deport any illegal immigrant in 2015 averaged $12,213. That includes identifying, catching, holding, processing through the courts and then shipping the person back home.
Just the removal part alone averaged $1,962, ICE said.
ICE is just one part of the U.S. response to the new surge. Customs and Border Protection, which handles both the official ports of entry and the nearly 2,000 miles of southern border in between them, has had to open several new facilities to process the large numbers that are showing up in Texas, including a new one unveiled last week near Donna. It can hold up to 500 people.
The latest numbers for November should be released any day, but October was already one of the worst months on record. Some 6,754 children traveling unaccompanied by adults, and another 13,123 parents and children traveling together as families, were apprehended.
The children and families can be in border officials’ custody for up to 72 hours, which has turned Border Patrol agents into “professional child care providers,” the agency’s chief testified to Congress. He said agents who should be patrolling the border are instead warming burritos and doling out clothing for those in the detention centers.
When children are nabbed, they are processed and then transferred to the Department of Health and Human Services, which then farms them out to relatives or sponsors. But along the way they are often shipped across the country, at taxpayer expense.
According to the ICE data, unaccompanied juveniles who end up in their custody are not housed in detention centers but in hotels, which accounts for more than 25 percent of the agency’s costs. Another 58 percent goes to airplane costs.
“We fought for nearly two years to get this data,” Mr. Wilcox said. “Now we see why the administration has been less than forthcoming and why they’ve repeatedly tried to blame the costly surge on Central American crime rather than its own amnesty policies.”
The stopgap spending bill that just cleared Congress includes authority for HHS to move up to $300 million around to expand care for the children. But the money can’t be tapped until February, or after the new administration takes over.
“The agency has sufficient funds now, but estimates say it may need more after February as funds run out,” a congressional aide said, with an eye toward the continued surge.
The Center for Immigration Studies said in a report that HHS had a staggering 11,200 children in its direct care as of Nov. 27, and is paying more for shelters now than it ever has in the history of its Office of Refugee Resettlement.
Jessica Vaughan, policy studies director at the center, said HHS will need up to $2 billion more over the next year to handle the influx. For now, that means the department is cutting from other priorities to care for the children.
Those cuts include money from HIV/AIDS and drug abuse prevention, cancer research and contagious disease prevention, she said.
She said the cuts were all the more striking because the role of ORR is to eventually deliver the children to families already here in the U.S. — families that oftentimes are here illegally themselves. Ms. Vaughan said that means the government ends up doing “the job of the human smugglers” by delivering the children the final leg of the journey.
“Congress should instead direct funding to the Border Patrol for temporary shelters from which the youths and their families can be swiftly returned to their home countries,” she said.
Source>http://www.washingtontimes.com/news/2016/dec/11/ice-spends-100-million-ferrying-illegal-immigrant-/
Posted by theodore miraldi at 8:24 PM