Angry residents of U.S. city sound off: 'Bulls--t! Send them all back!' 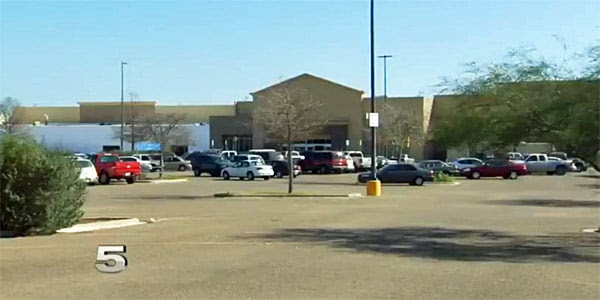 An abandoned Walmart building in Brownsville, Texas, will be used to shelter illegal immigrants streaming across the U.S.-Mexico border.
Brownsville, which is located at the southernmost tip of Texas, sits along the U.S.-Mexico border directly across from Matamoros, Mexico.
The new facility is the fourth of its kind to open in Brownsville and the seventh in Cameron County, Texas. The nonprofit organization behind the effort, Southwest Key, says the building will open in March and house unaccompanied illegal-alien children under the age of 17, most of whom come from Central America.
As Diana West noted in a 2014 WND column, Southwest Key has an annual budget of $150 million, much of it coming from federal government contracts. It is funded by the Office of Refugees Resettlement. It has 27 shelters in for illegal immigrants in Texas, Arizona and California, according to its website.
West added, “The chairman of Southwest Key’s board of directors, Victor Garza, is an official of La Raza, which hopes to reclaim the Southwest for Mexico.”
Once they cross the border and enter the facility, illegal immigrants are given food, a place to sleep, schooling, health care and access to counseling services, according to south Texas’ KRGV-TV.
Southwest Key says most of the illegal immigrants are between the ages of 15 and 17. Twice as many men come to the U.S. than women.
The organization would not tell KRGV-TV how many illegal immigrants it plans to house at the large facility.
Members of the local community took to KRGV-TV’s Facebook page to express their concerns and even outrage over the plans for the new facility. Some of 250 comments included:
On Wednesday came word that the Trump administration announced it is planning for a physical border wall to halt the flood of illegals at the border, and it says construction will begin in months, WND reported.
President Trump’s executive order on Wednesday instructed federal managers to “immediately take the following steps to obtain complete operational control … of the southern border.”
“In accordance with existing law, including the Secure Fence Act and IIRIRA, take all appropriate steps to immediately plan, design, and construct a physical wall along the southern border, using appropriate materials and technology to most effectively achieve complete operational control of the southern border,” the order says.
The Trump administration announced other immigration plans Wednesday, including hiring more federal law enforcement officers and penalizing cities that refuse to enforce immigration laws.
The border wall order said federal officials must “identify and, to the extent permitted by law, allocate all sources of federal funds for the planning, designing, and constructing of a physical wall along the southern border” and “project and develop long-term funding requirements for the wall, including preparing congressional budget requests for the current and upcoming fiscal years.”
Also required in the order is the construction or allocation of “facilities to detain aliens at or near the land border with Mexico.”
Trump also said Mexico eventually will reimburse the United States for the expense.
Source>http://www.wnd.com/2017/01/abandoned-walmart-opens-as-shelter-for-illegals/#rfrLtHEu1LJVAqr0.99

Posted by theodore miraldi at 6:53 PM