Davos ELITE Search for Fixes to Save Its SYSTEM From POPULISTS 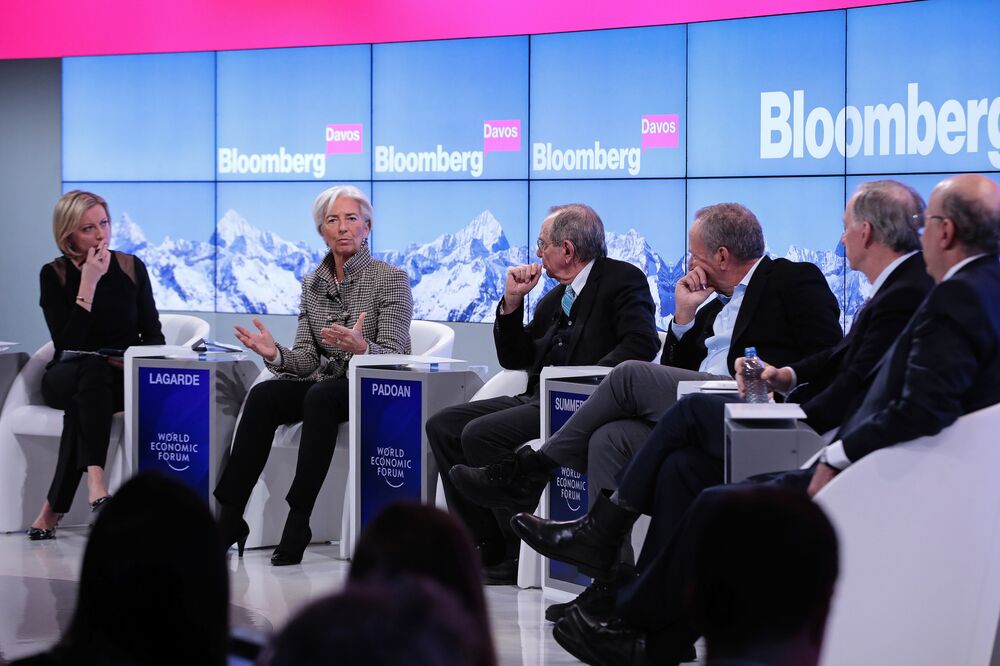 Jeff Black, John Follain
The great and the good of Davos agree they have a problem with populism. Finding a solution is the hard part.
On the second day of the World Economic Forum’s annual meeting in the Swiss Alps, delegates disagreed on how best to address the upending of the western political order, a debate made doubly urgent by the string of elections in Europe this year where anti-establishment parties could gain more ground.
While International Monetary Fund chief Christine Lagarde urged a list of policies from programs to retrain workers to more social spending, others fretted that the turbulence is only starting. Hedge Fund billionaire Ray Dalio warned on a panel chaired by Bloomberg Television’s Francine Lacqua that “we may be at a point where globalization is ending, and provincialization and nationalization is taking hold.”
That leaves technocrats trying to patch together potentially costly remedies to make the current system of global trade, banking and business links that the Davos club represents acceptable to the public at a time when newcomers like U.S. president elect Donald Trump threaten to dismantle it by scrapping trade deals and introducing tariffs.

“We need to go to a system where we are protecting workers, not jobs, and society will help people retrain or reorient,” Richard Baldwin, professor of international economics at the Graduate Institute of International and Development Studies in Geneva, said in an interview in Davos. “There may just be a need to man up. We have to pay for the social cohesion that we need to keep our societies advancing, and accept that this may be a higher tax burden on people.”
Lagarde said policy makers “really have to think it through and see what can be done” given the feedback from voters who say "No.” Among measures that could be implemented are fiscal and structural reforms, she added.
“But it needs to be granular, it needs to be regional, it needs to be focused on what will people get out of it and it probably means more redistribution than we have in place at the moment,” Lagarde told the panel entitled “Squeezed and angry: how to fix the middle-class crisis.” Excessive inequalities were a brake on sustainable growth, she said.
Davos over the decades has become synonymous with globalization and open markets, but in the background this year is the failure of business and political elites to predict any of the seismic political events that shaped 2016. That has raised questions over whether they are capable of understanding and addressing the anti-establishment forces that have roiled the U.S. and Europe over the past year.
After Trump and Brexit, there are more votes coming this year. Elections are due in the Netherlands, France and Germany, with a possible early poll in Italy following a constitutional referendum where voters rallied against the government.

The panel saw former U.S. Treasury Secretary Lawrence Summers attacking Donald Trump while Dalio, founder of Bridgewater Associates, struck a more pessimistic tone than Lagarde.
“I want to be loud and clear: populism scares me,” Dalio said. “The No. 1 issue economically as a market participant is how populism manifests itself over the next year or two.”
Now at Harvard University, Summers said populism is “invariably counter-productive” for those it claims to help. “Our President-elect has made four or five phone calls to four or five companies, largely suspending the rule of law, and extorting them into relocating dozens or perhaps even a few hundred jobs into plants in the United States,” Summers said.
For more on Davos, see our special report on the World Economic Forum 2017.

The panel also discussed how to combat the backlash against governments and the elite by taking back control of the political narrative.
Summers’s recipe for dealing with populism twisted Trump’s campaign slogan. “Our broad objective should be to make America greater than ever before,” Summers said. “That’s very different from making it great again.”
He suggested three major steps. First, “public investment on an adequate scale starting from infrastructure” also embracing technology and education; second, “making global integration work for ordinary people” and third, “enabling the dreams of every young American” including education, finding work and home purchasing.
And if that seems distant in the U.S., in Europe there may be even less chance of a big policy effort in a region still weary from the sovereign debt crisis, with budgets stretched and debt levels high.
Italian Finance Minister Pier Carlo Padoan told the panel that Britain’s departure from the European Union and Trump posed a challenge to policy makers.
“They have a vision, we don’t have a vision in Europe, not a vision which is comparable in terms of powerful message,” he said. “Sorry to be pessimistic, but that is the case.”
Source>https://www.bloomberg.com/politics/articles/2017-01-18/lagarde-urges-wealth-redistribution-as-dalio-warns-on-populists
Posted by theodore miraldi at 10:12 AM