Democrats are in GRIDLOCK Over John Lewis’ Claims 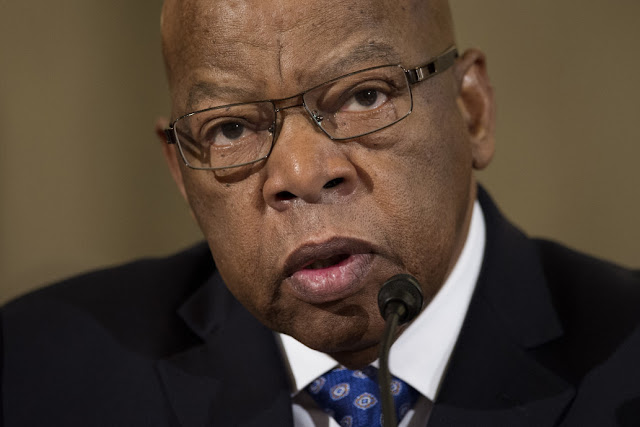 Post Editorial Board
From the right: Dems’ John Lewis Dilemma
It’s no surprise Donald Trump’s pushback against Rep. John Lewis’ charge that he’s an “illegitimate president” has caused a furor. But, asks Byron York in the Washington Examiner, how many Democrats agree with Lewis? So far, the response has been mixed: “Some openly disagree with Lewis. Others disagree but don’t want to say so explicitly. Still others agree but don’t want to say so explicitly. And some wholeheartedly support Lewis.” Even Bernie Sanders refused to sign on to the “illegitimate” claim. Because for some Democrats, it “would move them a bit too close to a kind of birtherism that they spent years denouncing.” Indeed, “if anyone other than John Lewis were leading the legitimacy fight, even more Democrats might distance themselves from it.”
Conservative take: Human Rights Watch’s Humiliation
The first step toward correcting a problem “is admitting you have one,” says Noah Rothman at Commentary, adding: “The left isn’t there yet.” Case in point: Human Rights Watch, which has just declared Donald Trump a threat to global human rights. Of course, this is all speculative, since Trump “hasn’t taken office yet,” so “nothing has happened.” And a close look shows these complaints to be “hollow partisanship,” since the “threats” include appointing pro-life judges and repealing ObamaCare. Which means “it isn’t Trump who represents a threat to human rights in HRW’s estimation but conservatism.” So, like that Harvard study “which laughably determined that North Carolina is today less free and democratic than North Korea, Human Rights Watch has given its critics ample justification to ignore its findings.”
Schools watch: Which Cory Booker Will Stand Up?
The confirmation process of Education Secretary-designate Betsy DeVos, according to the National Review’s John Fund, will “test the reform bona fides of New Jersey Democratic Sen. Cory Booker, a school-choice supporter who has served with DeVos on the board of a school-choice group.” In his two terms as mayor of Newark, he “expanded charter schools.” But now that he’s eyeing a run for president, Booker “suddenly has ‘serious concerns’ about DeVos, despite having worked closely with her in the past,” for fear of “withering fire from the powerful teachers’ unions.” If Booker rejects DeVos, “he will not only have given the school-choice movement he has championed a slap in the face, he will also have called into question the reputation he had of being a liberal problem-solver.”
Centrist: Trump Can Transform US-China Relations
Washington Post Editorial-Page Editor Fred Hiatt says Donald Trump “is not all wrong about China” — which gives him “an opportunity to reshape what, if not handled carefully, could become the world’s most dangerous bilateral relationship.” Though wrong on some specifics, Trump’s “underlying message of basic unfairness was right. China is not operating by the same rules as everyone else.” Yet “initiating a trade war, by slapping tariffs on Chinese products, would likely harm Chinese and Americans alike without accomplishing much.” So Trump “should insist on more reciprocity in economic relations, but consistent with fairness and principles of economic freedom, not simply to gain an upper hand.” That would benefit “American workers and firms,” but mostly “the Chinese people.”
Political expert: Don’t Kid Yourself — Trump Is Winning
It’d be easy to call Donald Trump’s transition “a mess for the president-elect,” says Matthew Cooper at Newsweek, but for one thing: “Trump is getting what he wants.” He notes, “it’s unlikely any of his cabinet nominees will be rejected by the Senate.” Yes, several “nominees took issue with some of Trump’s enunciated positions.” But Trump has backed off some of his more controversial stances, so “the differences between what his nominees stated and what Trump has stated isn’t as great as had been implied.” Moreover, “on any number of other issues, Trump is likely to get enough of what he wants to claim victory.” So “he looks poised for a lot of victories, despite critics underestimating him, which, come to think of it, sounds pretty familiar.”
Compiled by Eric Fettmann
Source>http://nypost.com/2017/01/17/democrats-are-in-gridlock-over-john-lewis-claims-and-other-notable-comments/
Posted by theodore miraldi at 9:58 AM