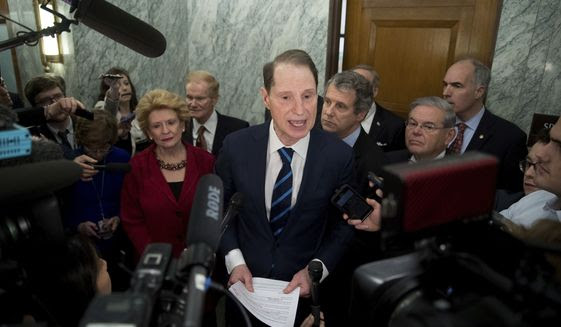 Senate Democrats on Tuesday boycotted a critical markup of President Donald Trump’s nominations to lead the Treasury and Health and Human Services departments, leaving a senior GOP leader aghast and saying there is “no excuse” for “this type of crap.”
Senate Finance Committee Chairman Orrin Hatch, Utah Republican, and fellow GOP members said it was unprecedented and “shocking” for Democrats to skip the planned roll calls on Steve Mnuchin for Treasury and Rep. Tom Price at HHS.
Republicans were hoping to advance each of the nominees to the full Senate, so they could be confirmed by the GOP majority and fill out Mr. Trump’s Cabinet.
Yet Democrats said both picks didn’t give straight answers during the vetting process, so they opted to delay.
Mr. Hatch said the boycott, which denied the panel the quorum needed to proceed, showed an alarming degree of disrespect for the nominees.
“This is one of the most disappointing days in my 40 years in the U.S. Senate,” Mr. Hatch said.
He also said Democrats couldn’t “lay a glove” on either nominee during their confirmation hearing, so Democrats should get over their disgust with Mr. Trump and his picks.
“These two nominees are going to through, regardless,” he said, vowing to schedule a new markup soon.
The panel’s top-ranking Democrat, Sen. Ron Wyden of Oregon, had signaled Monday he was prepared to vote against both nominees.
He said Mr. Price wasn’t straight with him about his ability to secure stock in an Australian medical company at a discounted price for select investors, even as he served as a leading health policy guru in Congress.
Mr. Wyden said he couldn’t vote for Mr. Mnuchin, either, because the nominee publicly denied that OneWest Bank engaged in the “robe-signing” of foreclosure documents under his leadership, despite court documents and testimony that seemed to show otherwise.
“This morning, the Finance Committee was scheduled to vote on two nominees who have misled the public and held back important information about their backgrounds. Until questions are answered, Democrats believe the committee should not move forward with either nomination,” Mr. Wyden said.
The boycott left a lopsided dais of stunned Republican members, who said Democrats had an unspecified “list of demands” regarding the nominees.
Republicans said they gave deference to Mr. Obama’s picks eight years ago, and that Democrats are leaving critical agencies without leaders.
“If the media doesn’t criticize them for this, then you’ll know what the country is going to go through in the future, Mr. Hatch said.
Mr. Hatch noted that Democrats on the Senate Judiciary Committee convening down the hall “can’t stand” Mr. Trump’s pick for attorney general, Sen. Jeff Sessions of Alabama.
“But at least they showed up,” he said.
Source>http://www.washingtontimes.com/news/2017/jan/31/democrats-boycott-markup-key-trump-picks/
Posted by theodore miraldi at 5:46 PM