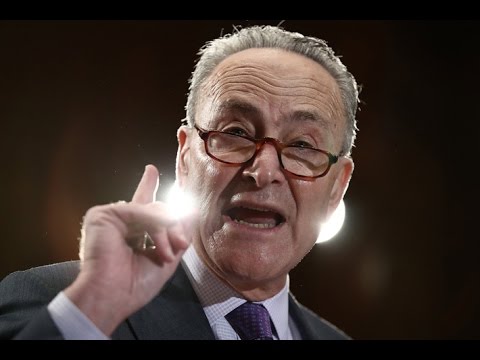 For the past two months, Democratic leaders have been reportedly discussing ways to approach the presidency of Donald Trump and have largely landed on a conclusion: fight him at every turn in a ‘not-now-not-ever’ opposition.
Politico reported that it conducted interviews with about two dozen Democrats in office who were willing to discuss the internal debate.
It apparently did not take very long for these politicans to determine that a working relationship with Trump was not possible, though Washington Gov. Jay Inslee told the magazine that there was a “grace period.”
“But it was midnight the night of the inauguration to 8 o’clock the next morning, when the administration sent out people to lie about numerous significant things,” Inslee said.
He continued: “It’s been worse than I could have imagined, the first few days.”
Sen. Kirsten GIllibrand, D-N.Y., is credited so far with voting the most against Trump, voting against three of four Trump Cabinet-level picks.
Dozens of House Democrats boycotted Trump’s inauguration, highlighted by Rep. John Lewis, D-Ga., who questioned the legitimacy of Trump’s election win.
Rep. Don Beyer, D-Va., said he will not be part of the "normalizing or legitimizing" of a man whose election may be the result of "malicious foreign interference of Russian leaders," a reference to U.S. intelligence's assessment that Russia meddled in the election to help Trump win.
Of course, there are drawbacks about being the opposition party and some interviewed have concerns that 10 Democratic senators are up for reelection in 2018 who work in states that Trump won.
Antonio Villaraigosa, the mayor of Los Angeles said a Trump presidency is taking this to “places we’ve never been.”
“So all I can tell you is any game plan you have for Donald  Trump  should have a fair amount of audibles,” he said.
Source>http://www.foxnews.com/politics/2017/01/27/democrats-reportedly-plan-scorched-earth-approach-to-fighting-trump.html
Posted by theodore miraldi at 8:44 AM