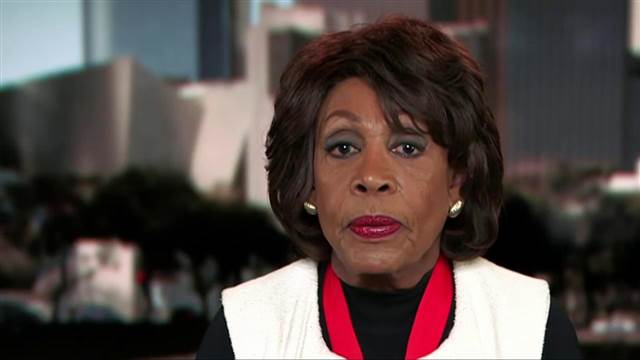 A Democratic Congresswoman has called for Donald Trump to be impeached on the grounds that he coined the term ‘crooked Hillary’ in collusion with the Russian government, even suggesting that the Kremlin was feeding Trump such lines to use during his campaign.
California Congresswoman Maxine Waters was egged on by MSNBC anchor Chris Matthews to explain why Trump’s presidency is ‘not legitimate’.
Matthews and Waters then engaged in some of the most dumb speculation ever aired on a broadcast.
Matthews suggested that the Russian government engaged in “collusion” with the Trump campaign, and asked Waters “Does that make Trump subject to impeachment?
Waters struggled to find a valid answer, so went with the following remarkable utterance:
“If we discover that Donald Trump or his advocates played a role to help provide strategy — if they’re the ones who came up with ‘Crooked Hillary,’ if they’re the ones who came up with, ‘she’s ill, something’s wrong with her energy,’ and the way that he basically described her during the campaign — I think that is something that would put the question squarely on the table whether or not he should be impeached.”
Waters went as far as to suggest that the nicknames Trump used against all his political opponents, even Republicans, were fed to him by Russia.
“So, you think you can commit an impeachable offense before you take office?” Matthews probed further.
“Well, I think that at the point that investigations discover and confirm and can document any of that role in helping to strategize — they had a role in attempting to determine the outcome,” Waters said, not answering the question.
She attempted further reasoning on the fly, again failing to deliver any logical conclusion:
“…In many ways they used the information they got when they hacked into emails etc. — if that was used against Hillary Clinton in some way, yes I think that’s impeachable.” Waters suggested.
Matthews also suggested that “Russian television was running a lot of propaganda that Hillary was mentally and physically impaired. That was their—That was the propaganda message.”
“Do you believe that Trump is somehow being held hostage by Vladimir Putin because of information on his behavior?” Matthews then asked, despite the fact that the story was revealed to be totally fake last week.
“You know, what we have heard, not in the classified briefing, but in this information about the dossier that has been collected by the man in London on him,” Waters replied, “It talks about some things that appears to ring true based on what we have learned about Trump.”
That’s right, MSNBC are STILL pushing fake news about Trump as if it’s real. In fact, Matthews himself admitted last week that the dossier was complete “misinformation”.
Nevertheless, Waters continued to bring the crazy:
“Ok, what I have learn or heard about the dossier, it’s about his involvement with women. It’s probably prostitutes that are involved and those kinds of things. And he has sounded that way. He has acted that way, and it gives you reason to think maybe something is to this and we need to find out more.” the Congresswoman declared.
Matthews then spent the rest of the broadcast fawning over outgoing president Obama with fake news guru Brian Williams in tow, commenting on how “cool” and “young he looks,” and how “smooth” he is for singing Al Green songs while in office.
Source>http://www.infowars.com/desperate-democrat-calls-for-trump-impeachment-claims-russia-fed-him-the-term-crooked-hillary/
Posted by theodore miraldi at 11:09 AM