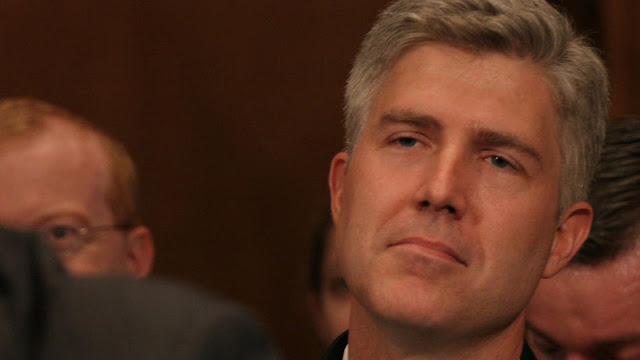 
Judge Neil M. Gorsuch, a highly regarded conservative jurist best known for upholding religious liberty rights in the legal battles over Obamacare, has emerged as a leading contender for President Trump’s first Supreme Court nomination.
Gorsuch, 49, was among 21 potential high court candidates circulated by Trump’s team during the campaign, but his stock has been rising lately as several admirers and supporters have been named to positions in the Trump administration.
He currently serves on the U.S. 10th Circuit Court of Appeals in Denver. A former clerk for Justice Bryon White, also a Colorado native, and Justice Anthony M. Kennedy, he served in the George W. Bush administration’s Justice Department.
In Gorsuch, supporters see a jurist who has strong academic credentials, a gift for clear writing and a devotion to deciding cases based on the original meaning of the Constitution and the text of statutes, as did the late Justice Antonin Scalia.
Just as importantly, Gorsuch is seen as someone who might be more easily confirmed in the Senate. Unlike other appointees of President George W. Bush, Gorsuch won an easy Senate confirmation on a voice vote in 2006.
"He is very bright, well-respected and quite personable," said John Malcolm, a lawyer at the Heritage Foundation. "And there's no question he would not be as contentious as some others."
Until recently, the two top contenders for the first Supreme Court nomination by Trump were believed to be Judge William H. Pryor Jr. of Alabama, who serves on the U.S. 11th Circuit Court in Atlanta, and Judge Diane Sykes of Wisconsin, who serves on the U.S. 7th Circuit Court in Chicago. Trump mentioned them in a Republican debate after Scalia died.
Pryor appeared to have an edge because he is a protege of Sen. Jeff Sessions, Trump’s choice for U.S. attorney general. Pryor has been an outspoken critic of abortion rights and gay rights, which won him admirers on the right, but also made him a target for liberals and Democrats. He once described the Roe vs. Wade decision as “the worst abomination in the history of constitutional law.”
While attacks from liberals would be expected, Pryor has also drawn criticism from some activists on the right. In 2011, he signed on to an 11th Circuit opinion by liberal Judge Rosemary Barkett upholding a sex-discrimination complaint filed by a transgender state employee in Georgia. The worker was hired as a man but was fired after returning as a woman. In a 3-0 decision in Glenn vs. Brumby, the 11th Circuit concluded it is unconstitutional “sex-based discrimination” to fire a state employee “because of his or her gender nonconformity.”
Leonard Leo, an executive vice president of the Federalist Society and an advisor to the Trump team, said in a broadcast interview that Pryor was following legal precedents. But the decision has been cited by some on the right as grounds for opposing him.
Perhaps as a result, several other prominent conservative judges like Gorsuch are getting more attention.
Senate Minority Leader Charles E. Schumer (D-N.Y.) said Sunday that Democrats would fight hard to stop court nominees who were not “bipartisan and mainstream.”
Pryor’s past comments on abortion and gay rights would almost certainly fuel a confirmation fight. When President George W. Bush nominated him to the 11th Circuit in 2003, Democrats used the filibuster rule to block a vote. Bush then put him in the post temporarily through a recess appointment. He finally won confirmation on a 53-45 vote in 2005 as part of a bipartisan Senate deal led by the so-called Gang of 14.
By contrast, Gorsuch does not have a record of strident comments that would fuel a confirmation fight.
However, he knows firsthand the rough side of political battles. His mother, Anne Gorsuch Burford, was a conservative Colorado state legislator and a states’ rights advocate when President Reagan chose her in 1981 to lead the Environmental Protection Agency. She was soon caught up in battles with environmentalists and Democrats on Capitol Hill for allegedly going soft on polluters. She was held in contempt of Congress in 1983 for refusing to turn over documents.
She said she had followed the legal advice of the Justice Department. Nonetheless, she was forced to resign in 1983 because the White House saw her as a political distraction. She returned to Colorado and died in 2004.
Neil Gorsuch was educated at a private school in Georgetown and has degrees from Columbia University, Harvard Law School and Oxford University, where he earned a doctorate in legal philosophy.
His best-known opinions grew out of the dispute over the Obama administration’s regulation requiring employers to provide female employees with the full range of contraceptives as part of their health insurance.
Catholic groups like the Little Sisters of the Poor and the evangelical Christian family who owned the Hobby Lobby craft stores sued and sought a religious exemption from paying for contraceptives that they said could “destroy a fertilized human egg.”
Both cases ended up in the 10th Circuit, and Gorsuch voiced support for the religious claimants.
“All of us face the problem of complicity,” he wrote in the Hobby Lobby case. And government should not force people with “sincerely held religious beliefs” to be complicit in “conduct their religion teaches them to be gravely wrong.” The Supreme Court reached the same decision by a 5-4 vote in 2014.
Shortly before he became a judge, Gorsuch wrote a book for Princeton University Press, “The Future of Assisted Suicide and Euthanasia,” which reviewed the history and the legal arguments for and against permitting people to have help in ending their lives. He concluded arguing for “retaining the laws banning assisted suicide and euthanasia … based on the idea that all human beings are intrinsically valuable and the intentional taking of human life by private persons is always wrong.”
Source>http://www.latimes.com/politics/la-na-pol-supreme-court-gorsuch-20170123-story.html
Posted by theodore miraldi at 8:16 AM