Obama's Little Liar now has a Moral Compass. This woman made this nation look stupid by Lying about Benghazi...tmiraldi 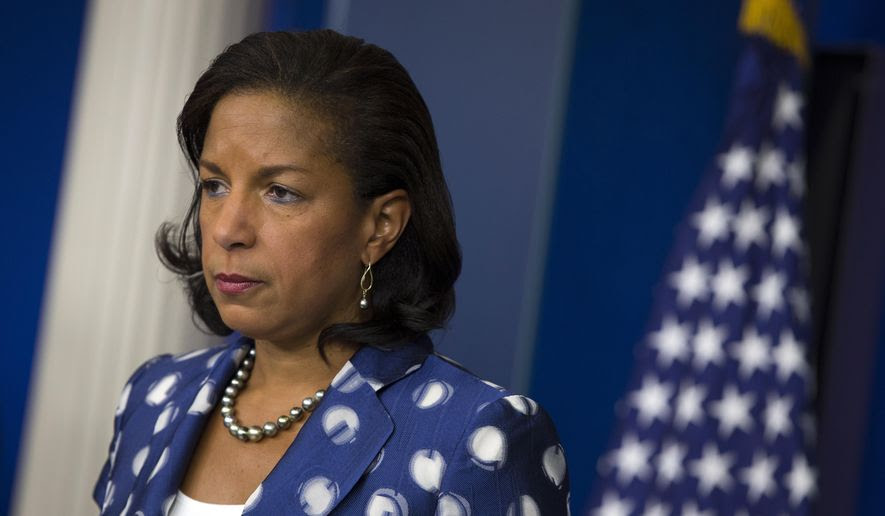 It didn’t take long for the old administration to attack the new administration.
Former national security advisor Susan Rice ignited a feud Sunday with the Trump White House by ripping the recent reshuffling of the National Security Council as “stone cold crazy.”
White House spokesman Sean Spicer fired back by calling Ms. Rice’s comments “clearly inappropriate language from a former ambassador” and took a swipe at the Obama administration’s track record on national security.
“And when you talk about the missteps made by the last administration, with all due respect, I think Ambassador Rice might want to wait and see how we handle this,” Mr. Spicer said on ABC-TV’s “This Week.”
The back-and-forth came in response to Saturday’s memo placing White House chief strategist Stephen Bannon, the former editor of Breitbart News, on the National Security Council while removing the director of national intelligence and the chairman of Joint Chiefs of Staff from NSC principals meetings.
“This is stone cold crazy. After a week of crazy,” Ms. Rice said on Twitter. “Who needs military advice or intell to make policy on ISIL, Syria, Afghanistan, DPRK?
She also retweeted a message from “Juan, P.E.” that said, “Trump loves the military so much he just kicked them out of the National Security Council and put a Nazi in their place.”
Mr. Spicer said reworking the meetings represents an effort to “streamline the process for the president to make decisions on key, important intelligence matters,” insisting that Mr. Trump will receive guidance regularly from top military and intelligence officials in other venues.
“The president gets plenty of information from the chairman of the Joint Chiefs of Staff. He continues to meet with him on a regular basis,” Mr. Spicer said. “He gets briefed by the secretary of defense, but what they have done is modernize the National Security Council so that it is less bureaucratic and more focused on providing the president with the intelligence he needs.”
This wasn’t Ms. Rice’s first attack the Trump administration. Ms. Rice, who served under President Barack Obama for the entirety of his two terms, including four years as U.S. ambassador to the U.N., spent the first week of Mr. Trump’s presidency leveling critiques on Twitter.
“Trashing Trans Pacific Partnership is a big fat gift to China, a blow to key allies, and a huge loss for American global leadership. So sad!” Ms. Rice said in a Monday tweet.
On Mr. Trump’s relationship with Mexico, she said, “Messing with Mexico is stupid and dangerous. Mexico has been key to limiting the flow of Central American migrants to the U.S.”
A few days later, she hit the Trump administration for issuing a Holocaust Memorial Day message that referred to “innocent people” without specifically mentioning Jews, saying, “Just imagine the response if Pres. Obama did that!”
That Ms. Rice would target the Trump White House so quickly represents something of a departure from the traditionally hands-off approach of previous administrations. President George W. Bush was widely praised for refusing to criticize Mr. Obama after he took office.
One week into his successor’s term, Mr. Obama has stayed above the fray, but others close to the former president have felt no such compunction.
His 18-year-old daughter Malia was spotted last week at an anti-Dakota Access pipeline protest during the Sundance Film Festival after Mr. Trump signed a directive to expedite the review process.
Former Obama Attorney General Eric Holder has been hired by the Democrat-controlled California state legislature to serve as a bulwark against the Trump administration’s policies on issues such as climate change and immigration.
Ms. Rice’s combative stance drew pushback on social media. Not surprisingly, criticism has centered on her five Sunday talk-show appearances blaming the deadly 2012 Benghazi raid on a “hateful” anti-Islam YouTube video.
“Don’t you have some YouTube video you should be basing foreign policy on, has-been?” actor Nick Searcy, who appears in FX’s “Justified,” said in a tweet.
Others have cheered her on. “@AmbassadorRice Please stay active, don’t retreat into prudence and retirement,” said Jorge Guajardo, former Mexican ambassador to China.
Ms. Rice said she also was outraged that Vice President Mike Pence may chair NSC meetings instead of the president. “Never happened w/Obama,” she said.
Before the inauguration, Ms. Rice struck a more cooperative note, insisting she was “rooting hard” for incoming National Security Advisor Michael Flynn.
“While it’s no secret that this administration has profound disagreements with the next one, I intend to make myself available to him, just as my predecessors have for me,” Ms. Rice said in a Jan. 10 speech to the U.S. Institute for Peace. “We are all patriots first and foremost. Threats to our security and democracy should be above partisanship.”
Regarding Mr. Bannon’s role on the council, Mr. Spicer said the chief strategist is a former naval officer who has a “tremendous understanding of the world and the geopolitical landscape that we have now.”
“Having the chief strategist for the president in those meetings who has a significant military background to help guide what the president’s final analysis is going to be is crucial,” Mr. Spicer said.
Source>http://www.washingtontimes.com/news/2017/jan/29/susan-rice-ex-national-security-advisor-hits-trump/
Posted by theodore miraldi at 5:27 PM