More Leading From BEHIND

Russia and Iran practice expansionism in the South Caucasus 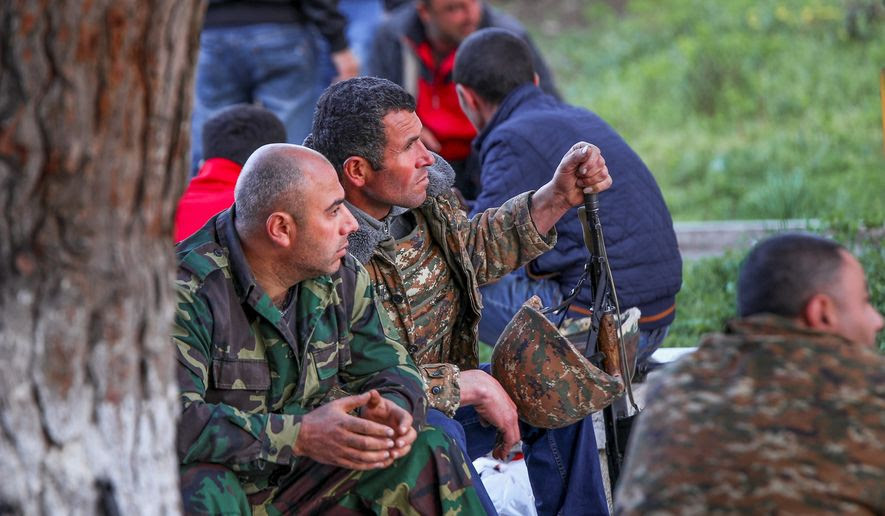 
ANALYSIS/OPINION:
During the past near-decade, the United States was relegated to the policy of “leading from behind.” This basis for foreign policy left the world with a U.S. often absent from the world stage in any constructive form, and the world suffered.
Russia, once on a rocky road to some formula of democracy and stability, is now a neo-imperialist power on the move — invading its neighbors, forcing others into Cold War-type treaties, propping up regimes in the Middle East under the guise of fighting ISIS — all while the United States stands by.
In its effort to counter all things American, to weaken the Atlantic Alliance and the European Union, Russia conceived the Eurasian Economic Union to counter the EU, while the Collective Security Treaty Organization (CSTO) is “Putin’s NATO.”
The Trump administration will immediately deal with these and more issues utilizing foreign policy tools that have lost a good deal of their luster and efficacy. The task will be made more difficult by diminished American diplomatic, political and military preeminence. In addition to Russia, China and others, on the agenda is Iran, the Iran deal and Iran’s meddling in Eurasia and the Middle East, and frozen conflicts left to fester.
Case in point: the frozen conflict between Armenia and Azerbaijan. In simplest terms, during dissolution of the Soviet Union, these newly minted nations went to war over the Nagorno-Karabakh region of Azerbaijan. With Russian special forces and armor augmenting the Armenian military and with military support from Iran, the conflict saw Armenia occupy roughly 20 percent of Azerbaijan’s internationally recognized territory, while Armenia ethnically cleansed and murdered the entire expanse of ethnic-Azeris and Muslims.
In the intervening years, Armenia’s Soviet-style central government presided over social stagnation, economic underdevelopment and dependence on foreign handouts while the nation contended with an ever-present brain drain that has left it with few innovative or internationally competitive people. Azerbaijan cast its lot with the West following independence and, a current economic downturn notwithstanding, possesses a vibrant economy, a cosmopolitan society, top-notch education and a bright future.
Numerous ill-fated attempts to negotiate have come and gone. The Minsk Group, an effort of the Organization for Security and Cooperation in Europe chaired by the United States, Russia and France, is well into its second decade of dithering.
Recently, Azerbaijan sustained a cross-border attack by Armenia, a departure from the usual Armenian bellicosity along the “line of contact” between Azerbaijan and occupied Nagorno-Karabakh.
In typical grotesque style, photos of a fallen Azerbaijani soldier’s body were widely disseminated on Armenian social media. The photos showed that the young soldier lacked equipment or clothing that would suggest he was a special forces officer, as Armenia claimed.
This attack followed a clash in April 2016, which saw an offensive so substantial as to compel a response from Azerbaijan. To the opposing side’s bewilderment, the Azerbaijani military responded decisively, utilizing advanced weapons, as well as a tactical proficiency that saw Azerbaijan liberate a significant swath of territory, including a strategic highland.
President Trump has made no secret of his enmity for Iran, the Iran deal and Iran’s meddling in this region — all clearly anti-American, as well as against Azerbaijan and Israel. As they say, timing is everything and reveals much — it is easy to see a Russian or Iranian hand in Armenian actions.
Armenia’s dependence on foreign nations, particularly Russia and Iran, has been underscored by public support by high-ranking officials in these countries for Armenia and erroneously attributing the violence to Azerbaijan.
Prior to the cross-border attack, Iran’s defense minister issued a stern warning to Azerbaijan, explicitly stating its displeasure with Israeli Prime Minister Benjamin Netanyahu’s recent successful visit to Baku. He stated that Iran will not tolerate “Israel’s access to the region and presence in Azerbaijan.” Immediately following Mr. Netanyahu’s Azerbaijan visit and just before the Armenian cross-border attack, Iranian President Hassan Rouhani visited Armenia and hailed their close partnership.
When Armenian President Serzh Sargsyan uncharacteristically rushed to the airport to personally welcome Mr. Rouhani, it spoke volumes about Yerevan’s subservience to Tehran. In response, the Azerbaijani Foreign Ministry issued a statement that Armenia’s provocation is explicitly considered as an attempt by Armenia “to involve the third parties to the conflict to maintain the status-quo.”
The deepening of the Russian-Armenian military alliance is exemplified in Armenia’s attempts to involve the Collective Security Treaty Organization in the Nagorno-Karabakh conflict. In response to the cross-border attack, CSTO’s outgoing head, Russia’s Nikolay Bordyuzha, rushed to Armenia’s defense by attacking Azerbaijan in an aggressively worded statement. In addition, the establishment of Armenian-Russian unified forces and joint air defense to cover “the whole Caucasus region,” as well as the transfer of Iskander-M missiles to Armenia, are particularly worrisome.
With many messes to clean up, relations to be repaired and issues to finally address, the Trump administration would do well to stem Russian and Iranian expansion in the South Caucasus.
Source>http://www.washingtontimes.com/news/2017/jan/25/donald-trump-should-stem-russia-iran-expansion-in-/
Posted by theodore miraldi at 8:24 AM