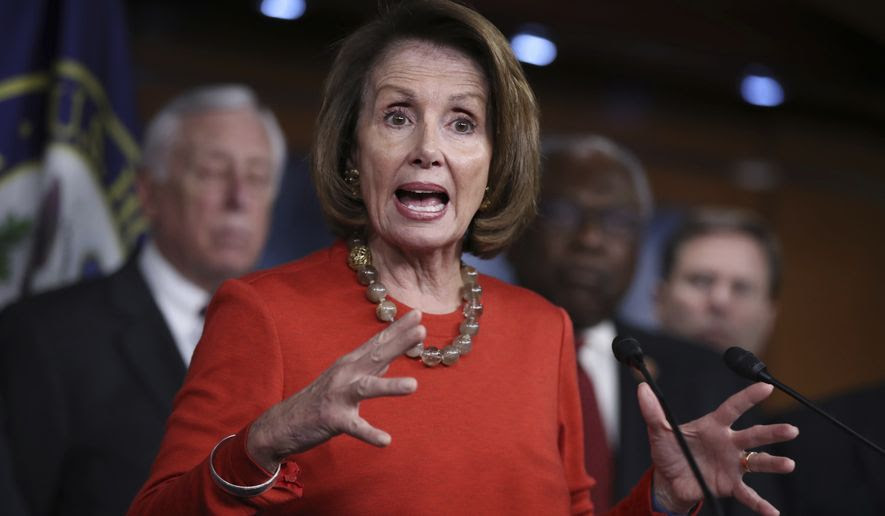 House Minority Leader Nancy Pelosi told MSNBC’s “Morning Joe” on Friday that it is a misconception that Democrats are not “people of faith,” and that Republicans “dishonor the God who made them.”
Joe Scarborough and Mika Brzezinsk sat down with Mrs. Pelosi for an Inauguration Day interview that addressed the Democratic Party’s recent electoral troubles. Mr. Scarborough asked the California senator how Democrats could “reconnect with middle America,” which prompted her break with “the spirit of the day of unity.”
“Thank you for asking that question,” Mrs. Pelosisaid. “[There is a] cultural issue, especially when it comes to rural America — the isolation that some people feel there — plus they don’t think the Democrats are people of faith when the fact is we are.
“I say, this will be a little not in keeping with the spirit of the day of unity, but I say [Republicans] pray on church on Sunday and then prey on people the rest of the week,” she said. “And while we’re doing the Lord’s work by ministering to the needs of God’s creation, they are ignoring those needs, which is to dishonor the God who made them.”
The senator, a Catholic, said that Democrats do not wear religion on their sleeve because they don’t want to “exploit” such issues.
“Maybe we should,” she said. “We don’t wrap ourselves in the flag, but maybe we should. We’re all, Democrats [and] Republicans, everyone loves our country.”
Ed Morrissey, a Catholic from the conservative website Hotair, objected to Mrs. Pelosi’s statement by noting former President Barack Obama’s policies that affected nuns like the Little Sisters of the Poor.
“Democrats have adopted the progressive religion almost without exception, even to the point of suing Catholic nuns and business owners of faith for not providing free contraception and forcing Christian business owners who oppose same-sex marriage to participate in its ceremonies or face ruinous fines,” Mr. Morrissey wrote Friday. “Their religious sacrament — especially Pelosi’s — is abortion, about which she occasionally lectures the Catholic Church and other Christian denominations while insisting on taxpayer funding for abortions, especially in this last election cycle. Democrats only stop sneering at religious belief when they lecture middle America on diversity.”

Morning Joe
✔@Morning_Joe
.@NancyPelosi on Dems: We don't wear our religion on our sleeve and maybe we should