Supreme Court NOMINEE Has Both Sides Preparing For BATTLE

Trump to name pick for court on Today! 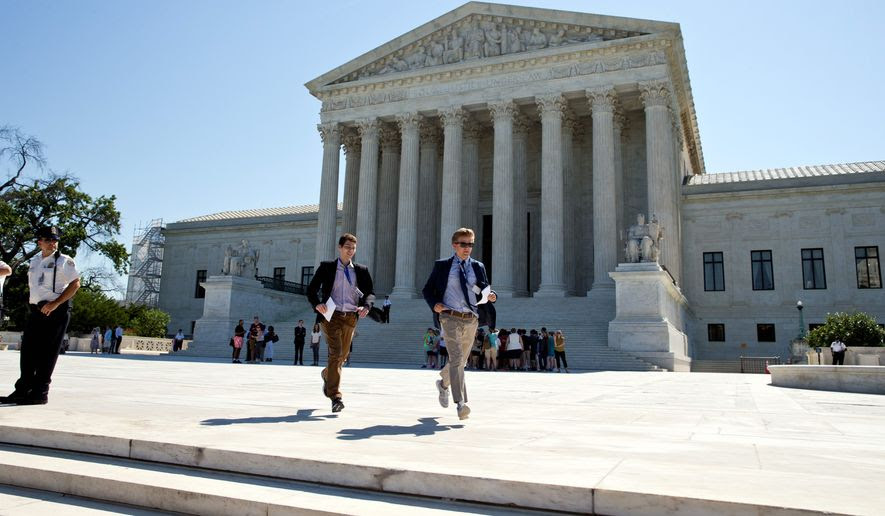 
President Trump will announce his nominee to the Supreme Court on Tuesday night and within seconds both sides will be rolling out email blasts and advertising as they try to define the pick in Americans’ minds, knowing that the initial hours and days are crucial.
That became clear in the 1980s when Sen. Edward M. Kennedy, Massachusetts Democrat, delivered a vigorous attack on Judge Robert Bork, President Reagan’s pick to fill an empty Supreme Court seat, tarring the judge as a legal reprobate and saying “Robert Bork’s America” would restore Jim Crow. Kennedy’s barrage of criticism helped sink the nomination.
Conservative groups say they are ready to prevent a repeat. One legal organization says it’s ready to spend at least $10 million to defend a Trump Supreme Court pick.
The Judicial Crisis Network, the group with a $10 million budget, told The Washington Times that it is planning to run ads in nine Democrat-controlled states that Mr. Trump won in the November election.
All nine senators are up for re-election this year, and Carrie Severino, the Judicial Crisis Network’s chief counsel, said they will have to pick between backing Mr. Trump’s nominee or siding with their party’s most liberal senators who are promising a filibuster.
“We actually are planning on launching the biggest campaign that’s ever been launched in favor of a Supreme Court justice,” Ms. Severino said.
The seat came open last February with the death of Justice Antonin Scalia. Senate Republicans kept it open for nearly a year by refusing to vote on President Obama’s nominee, Chief Judge Merrick Garland of the U.S. Court of Appeals for the D.C. Circuit.
Democratic leaders, still salty over that obstruction and already convinced that whoever Mr. Trump picks will be objectionable, have vowed payback. They will be backed by liberal groups just as eager as Republicans to shape the debate.
People for the American Way will sponsor ads and a massive campaign to dig into Mr. Trump’s nominee, said Executive Vice President Marge Baker.
She said given Mr. Trump’s early spate of actions, the Supreme Court could be a crucial backstop — and the next justice could sway the bench.
“I think particularly right now in light of the discriminatory executive orders that were issued over the weekend and announced plans to do a voter fraud investigation, it’s becoming imminently clear how important it is that we have an open, fair-minded, independent jurist in this position,” she said.
She is planning a rally at the Supreme Court on Tuesday night as soon as the nominee is announced.
Constitutional Accountability Center spokesman Doug Pennington said his group is “gearing up like everyone else,” preparing op-eds and planning to coordinate with its allies to oppose Mr. Trump’s nominee.
Some Democrats in the Senate are already signaling that they will attempt a filibuster to block whomever the president chooses.
Under Senate rules, it will take 60 votes to overcome a filibuster and hold a confirmation vote. A Trump pick would need to hold all 52 Republicans and earn the support of at least eight Democrats.
However, there has been rumbling that Republicans may one-up the Democrats by eliminating outright the filibuster on Supreme Court nominees, a couple of years after Harry Reid, as Senate majority leader, eliminated it for lesser federal court picks.
Sen. Jeff Merkley, an Oregon Democrat who led the fight to eviscerate the filibuster four years ago, now says he is preparing to use the tool as retaliation for how Republicans treated Judge Garland.
“This is a stolen seat,” he told Politico on Monday.
White House press secretary Sean Spicer said voters are expecting better behavior.
“That just shows you that it’s all about politics; it’s not about qualification,” said Mr. Spicer. “The president has a right to have his nominees taken up.”
Concerned Women for America said it will spend $200,000 on the confirmations of Attorney General nominee Jeff Sessions and the next high court pick, while Tea Party Patriots said it is preparing to hold 1,000 house parties across the country over the next 100 days to get voters up to speed on Mr. Trump’s pick.
“We’re asking them to call their senators, write letters to the editor, write letters to their family and friends, ask constituents in key states to make phone calls to their senators, hold sign-waving events, sign petitions,” said co-founder Jenny Beth Martin.
Americans for Limited Government President Rick Manning told The Washington Times that if Mr. Trump picks “a strong legal constitutional constructionist,” his group is ready to rally its supporters to back the nominee.
Mr. Trump said his pick came from the list of 21 names he released during the campaign. Three names reportedly rose to the top in the final days: Judges William Pryor, Neil Gorsuch and Thomas Hardiman.
Conservative groups are preparing to accuse Democrats of hypocrisy if they throw up roadblocks. America Rising Squared has a 90-second video showing statements made by Senate Minority Leader Charles E. Schumer of New York and other leading Democrats arguing for an up-or-down vote on Judge Garland.
“Democrats may try and run, but they can’t hide from their records — all we have to do is roll the tape,” said Brian Rogers, executive director of America Rising.
Surrounded by a group of small-business leaders on Monday, Mr. Trump said his Supreme Court nominee is a “person who is unbelievably highly respected, and I think you will be very impressed with this person.”
• S.A. Miller contributed to this report.
Source>http://www.washingtontimes.com/news/2017/jan/30/supreme-court-nominee-has-both-sides-preparing-for/
Posted by theodore miraldi at 8:05 AM